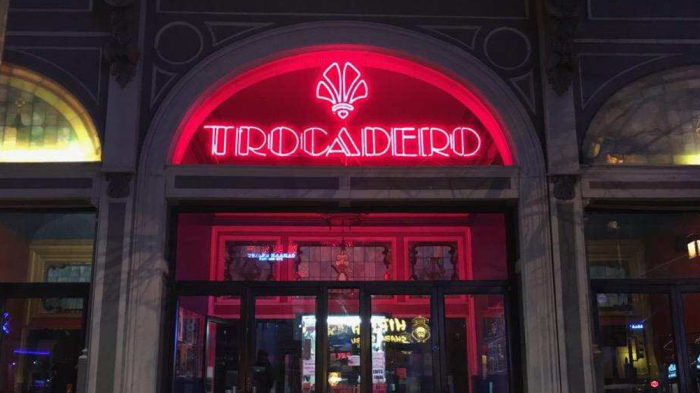 After several days of rumors and a last-minute attempt by local promoters to save it, Philadelphia’s Trocadero Theatre — part of the city’s entertainment skyline since 1870 — is closing at the end of May, owner Joanna Pang confirms to Variety.

The last of the city’s mid-sized independent live venues, the 1,200-capacity Chinatown performance palace was a favorite of rock and rap acts since the 1990s, with a burlesque history reaching back many decades.

“The Troc has been an amazing experience, and we’re proud of what we have done for the last 20 years — not only with regard to the local and national music scenes, but beyond, too,” Pang (pictured with friends at the club, below) tells Variety. “We were an independent room that could embrace and pursue every aspect of multiculturalism, from drag performers to zombie proms to LGBTQ events. We were dedicated to welcoming all artistic scenes, and I’m proud of that. But it’s time.”

Pang — daughter of Stephen Pang, who purchased the Troc in 1979 and operated it as a Chinese-themed cinema through the early 1980s — says closing the venue is almost like losing a family member.

“This was home to me,” she said. “But the landscape of the business has changed in the last five years. It’s harder now to be an independently run venue — it’s a different world. There are bigger rooms run by bigger concert corporations,” she notes. While she didn’t name them, the city has seen giant Live Nation recently open rooms such as The Met Philadelphia and The Fillmore Philadelphia, and AEG/Bowery Presents’ takeover of the old Electric Factory property for its Franklin Music Hall. Also, within the last decade, similarly sized venues such as World Café Live and Union Transfer have offered fans a shinier alternative to the Troc’s tattered Victorian grandeur.

“It’s sad for a lot of reasons,” said David Kisleiko of Dave Kiss Presents, who regularly placed shows on the Troc’s main stage and its upstairs balcony bar. His Stabbing Westward gig on March 31 is Kiss’ last Trocadero show.

“The difficult part of closing with shows on the calendar is that these concerts still need to happen, and as a promoter I need to scramble to find a new venue,” says Kisleiko whose recent Troc shows include gigs with Giorgio Moroder, Helmet and Low Cut Connie. “Top notch artists such as mine require a certain caliber of production, which the Troc afforded.” He also notes that that without The Troc, independent booking in Philadelphia will become more difficult for promoters such as himself (“because there is one less venue to book”) and audiences looking beyond the major concert booking agencies.

“What a bummer,” says Low Cut Connie pianist and singer Adam Weiner, who calls the Troc his favorite venue. “I’ve had some magical nights there. We shot Low Cut Connie’s video for ‘Revolution Rock n’ Roll’ there, and the room gave the whole video a seedy, but open-hearted vibe — pure rock and roll. I first played there as a solo act [Ladyfingers] many years ago, and barely three months ago we chose the Troc for our New Year’s Eve show. This is a very dirty, vibe-y Philly room, and I loved it. I’m sad to see it go.”

Much of the seedy charm that Weiner speaks of of comes from the Troc’s longtime standing as a vaudeville and burlesques venue, one that was  added to the National Register of Historic Places in 1973. Famously opened as the Arch Street Opera House in 1870, it was renamed the Trocadero in 1896 and became a home to Depression-era vaudevillians such as W.C. Fields and burlesque stripteasers such as Blaze Starr.

“I’ll miss all of the history of this place,” says Pang, who is planning to sell the Trocadero after May’s final shows, although she promises a series of big-name closing concerts and an finale with Philly’s avant-garde Big Mess Orchestra, the first act to play the Troc under Joanna Pang’s ownership.

“We’re going to go out with a bang, in grand Troc style.”