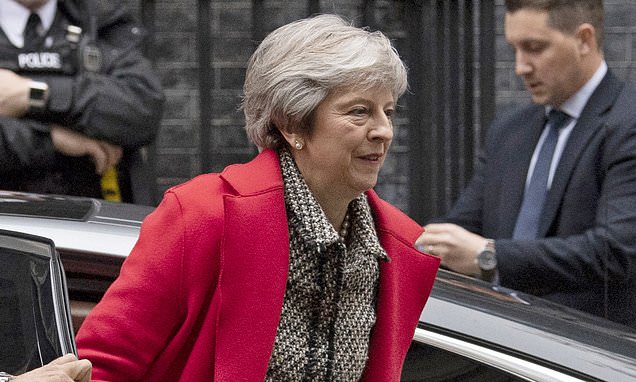 PETER OBORNE: Leadership challenge could boost Theresa May by silencing her critics and seeing off her attackers

Theresa May is still in charge. That is the indisputable fact which defines the political landscape this weekend.

Not Boris Johnson. Not Jacob Rees-Mogg. Not Jeremy Corbyn. Not Michel Barnier.

Buoyant, unbroken and very much in command, Mrs May has survived the departure of two Cabinet ministers and a host of junior members from her Government.

This mass defection amounts to the most sustained attempt yet to remove her from office. Yet this remarkable lady, bloodied but unbowed, battles on.

There’s still talk at Westminster that the 48 names necessary to call a leadership election can be mustered. 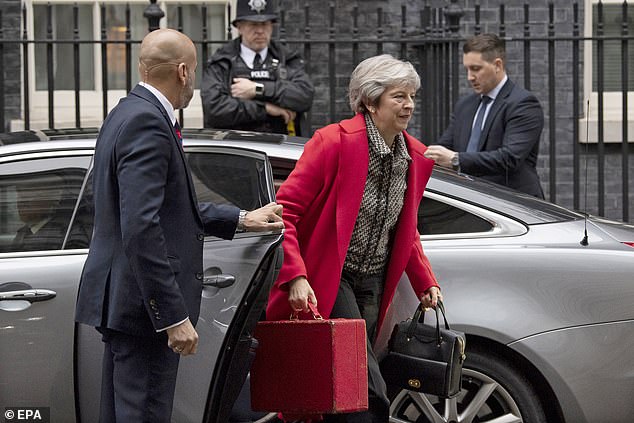 Theresa May (pictured in Downing Street yesterday) is still in charge. That is the indisputable fact which defines the political landscape this weekend

Yesterday was the third time in the past six months that we’ve been told that the number of names has approached 48.

Ready to wound. Afraid to strike. This is the undignified and indeed cowardly condition that afflicts Mrs May’s enemies.

How utterly contemptible. Yet I believe that a leadership challenge might well strengthen Mrs May. It would enable her to silence her critics and see off her attackers.

Undoubtedly, many political observers take the opposite view. I have had several conversations with intelligent people who know the Tory Party like the back of their hand. They are convinced the Prime Minister is finished.

They tell me the sense of betrayal, disgust and anger among Tory activists at Theresa May’s Brexit deal cannot be exaggerated. They say that mutiny is raging like wildfire through the Conservative Party in the country.

And they add that Mrs May has alienated many potential Cabinet allies by her management style. She is too secretive. She works with an inner team of advisers and does not consult colleagues. She lacks leadership qualities.

All this is true. And many sources tell me this — Remainers as well as Brexiteers.

Yet outside, in the country at large, people see something else. Voters take note of an indomitable lady who will not be deterred from pursuing her vision of Brexit.

Ordinary voters see a Tory Party that has gone barking mad, with Mrs May the lone voice of sanity at the helm.

I believe there is at least a measure of truth in this popular perception, which reflects a distressing trend of modern politics.

Go back to the post-war era from Churchill to Thatcher, and the Tories were a mass political party with millions of members. At its height, one in ten of the adult population of Britain was a paid-up Conservative. This meant that the Tories had profound links into mainstream society.

Many of these are splendid people, but often they are past retirement age.

Many of the younger members, however, take what can only be called an unhealthy interest in politics. They are ideologically motivated. From this meagre pool, many Tory MPs emerge. They are not well balanced. To be frank, some of them are a little odd. Not quite 16 annas to the rupee.

This defines the average member of the European Research Group, the body which has been mobilising to destroy the PM.

The group’s organiser Steve Baker is an example. He’s a highly intelligent and hard-working man. Not a bad person by any means.

But he’s also an obsessive, and that means he lacks a sense of proportion.

The danger is that in the hothouse atmosphere of Westminster, these political nerds get far too excited. They talk to each other far too much. They are lacking in judgment.

The judgment problem shows through with their choice of an alternative leader to Mrs May. The one they seem to want at the moment is David Davis, the former Brexit Secretary. This notion is preposterous, as Simon Fraser — the former permanent secretary at the Foreign Office — pointed out yesterday.

This is what he tweeted: ‘David Davis was a terrible Brexit Secretary. He could hardly be bothered to go to Brussels and rapidly lost respect there.’ 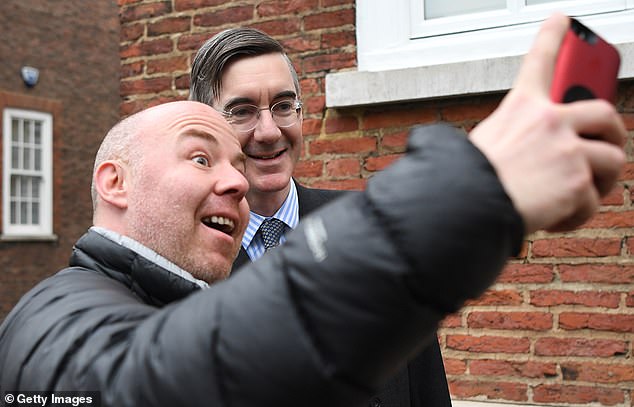 Conservative MP Jacob Rees-Mogg poses for a picture in Westminster on Friday. He is one of the Tory plotters who has submitted a letter in an attempt to force a confidence vote

All true, I am afraid.

And the same applies to Dominic Raab, Mr Davis’s successor — and another favourite of the ERG.

Michael Gove, the Environment Secretary, is another case in point. On Thursday, he tried to humiliate Prime Minister May when she offered him the vacant post of Brexit Secretary.

Gove — the commander-in-chief of Westminster’s political nerds, who has spent his entire adult life in the media/Westminster hothouse — tried to insist on conditions. He said he would accept the job only if he could renegotiate Mrs May’s treaty.

The Prime Minister called his bluff and stared him down. Gove retreated, and after spending 24 hours in a huff contemplating resignation, resolved to stay in the Government.

Result: victory for Theresa May. Many male politicians have made the mistake of underestimating the Prime Minister. Gove is merely the latest example.

Mrs May has proved this week that she’s much tougher than she looks. But then she needs to be because the failed Cabinet mutiny is only the start of her problems.

She faces another giant test when her deal comes before the House of Commons, probably in early December.

Once again, the odds look desperate. The Democratic Unionists indicate they will vote against, smashing Mrs May’s makeshift Commons majority.

A sizeable number of Tories — who knows how many — will do the same.

The arithmetic is dire. The Prime Minister looks doomed to defeat.

Perhaps, but Theresa May is looking more and more like a political Houdini.

As the Conservative rebels discovered again this week, their leader possesses nerve and courage which, I am afraid, puts them to shame.

Amber has her credit restored 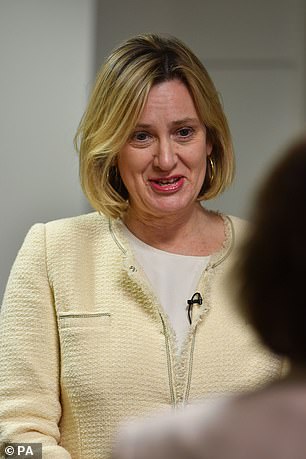 Amber Rudd, pictured tonight, has made a dramatic return to Theresa May’s Cabinet calling on Tory rebels to ‘think again’

The return of Amber Rudd to the Cabinet is welcome. The inquiry into the Windrush scandal which forced her resignation cleared her of misconduct or incompetence.

This meant that it was only natural justice she should be brought back into Government for another chance. Moreover, her presence is urgently required at the Department for Work and Pensions, where the outgoing Esther McVey had failed to get a grip. Amber Rudd’s central challenge is to defend the excellent Universal Credit reforms in face of Labour threats to abolish the new system.

That means dealing sensitively with the inevitable teething problems. I expect Ms Rudd to make a success of her new post.

I am less certain about the new Brexit Secretary Stephen Barclay. Indeed, like many people, I have only the faintest idea who he is. Yet Mr Barclay’s obscurity does not matter, since it is clear that he will not be allowed anywhere near the remaining Brexit negotiations. The real power will lie with a civil servant, the negotiator Olly Robbins.

Given the unhappy fate of the previous two incumbents, David Davis and Dominic Raab, it’s a pity the Prime Minister didn’t just abolish the post altogether.

Plans are reportedly in motion to bring former Labour foreign secretary David Miliband back to Britain to lead a new centre party.

They should be put into reverse following news that Mr Miliband is earning £680,000 a year for running the International Rescue Committee, a U.S. charity. Such sums are hard to justify in private business, and obscene and morally wrong in the charitable sector. Shockingly, Mr Miliband’s charity receives millions of pounds in overseas aid. That should be halted at once.

This week, peers voted to overturn a ruling by the House of Lords’ commissioner for standards, and block the suspension of Lib Dem peer Lord Lester for alleged sexual harassment. This ruling demonstrates yet again that the Lords is a morally corrupt and indeed worthless institution in urgent need of root and branch reform.