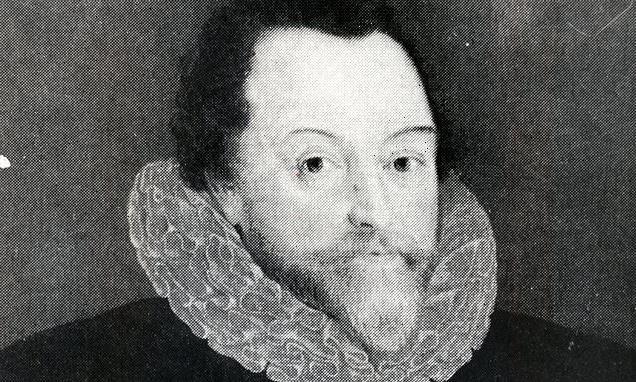 A primary school in London, named after Sir Francis Drake, has changed its name to something so dull I cannot remember it.

The original BBC report of this decision (now amended) described Sir Francis as a slave trader and failed to mention much else about him.

Apparently the school has only just discovered this bad thing about the Elizabethan sailor, though I think it has been well known for years. The action is stupid.

While I readily admit that Drake did some very wicked things, I think it idiotic to pretend that he was not a great Englishman. 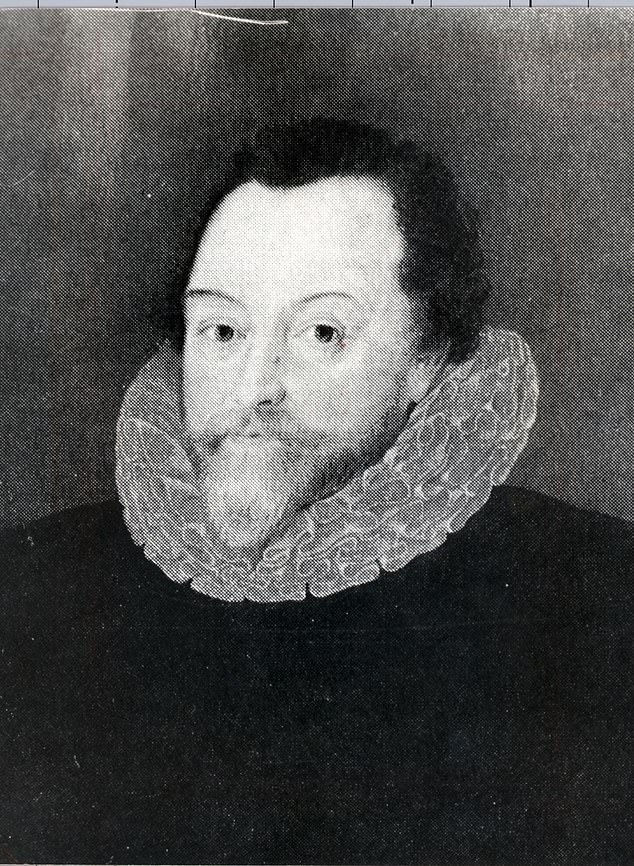 Pictured: Sir Francis Drake who had existed as a normal man, drinking, swearing, fighting and who knows what else. But a misty, magical idea of him still lingered in that deep green, rain-sodden peninsula, where the unresting sea is ever-present and our dependence on it for our safety is unforgettable 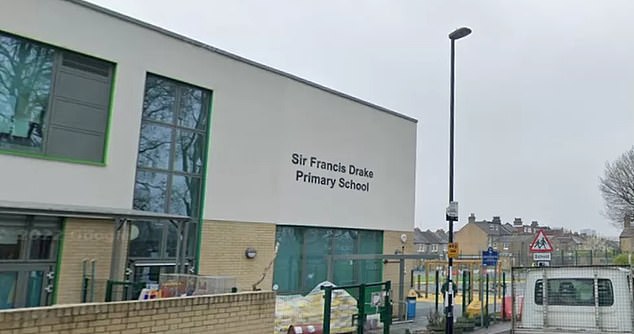 That belief is deep inside me. As my father was in the Navy, and so we moved all the time, I cannot claim to come from any one place in this country. I was born in Malta, in those days very British and now a foreign country.

My first memories are of Scotland, a lot more British than it is now, and then, much more strongly, of the West Country – about as British as you can get.

In that part of the world and at that time, Sir Francis Drake was a figure out of legend. Of course, he had existed as a normal man, drinking, swearing, fighting and who knows what else. But a misty, magical idea of him still lingered in that deep green, rain-sodden peninsula, where the unresting sea is ever-present and our dependence on it for our safety is unforgettable.

He had sailed round the world in a ship so tiny that the thought of the voyage makes me go pale. He had brought the wealth of Spain to England. He had defeated one of the most dangerous attempts to destroy this country by foreign invasion.

DRAKE’S Drum (the legend said that it beat mysteriously at moments of national peril) was still at his old home in Buckland Abbey, not far from one of our many rented, temporary homes. I would gaze in awe at it.

I would not have been wholly surprised to see Drake himself strolling in one of the deep lanes on the edge of Dartmoor. The great naval station at Devonport, still in those days a mighty fortress filled with warlike grey vessels, was called (it still is) HMS Drake. 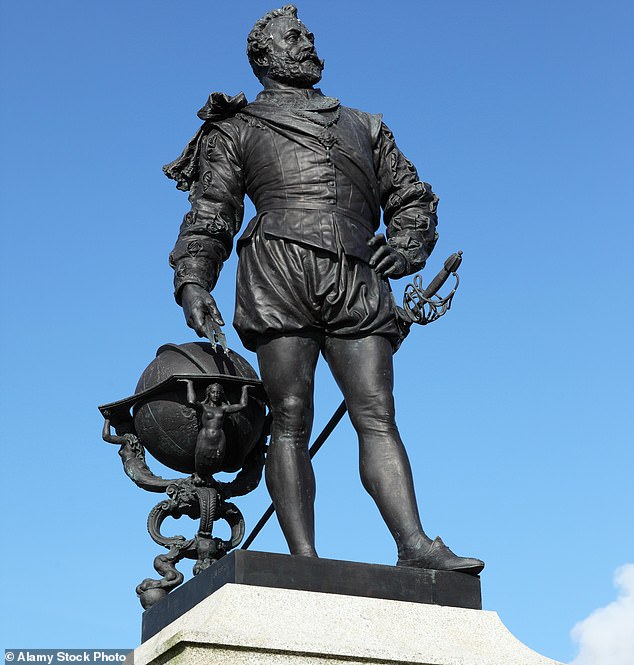 In September last year, a statue of Sir Francis in his hometown of Tavistock, Devon, was given a new information panel detailing his slave trading expeditions

At my astonishingly old-fashioned preparatory school, where every dormitory was named after a distinguished seadog (including Sir Francis, of course), we learned Henry Newbolt’s poem Drake’s Drum, spoiled by an embarrassing attempt to put it into Devon speech.

In it, Drake lies dead or perhaps asleep in his hammock a thousand miles away, ‘slung atween the roundshot in Nombre Dios Bay’, but dreaming all the time of Plymouth Hoe. The general idea was that when danger threatened, this calm but ferocious old seaman would return to save us again, as he had when the Spanish Armada threatened us in 1588. It is about as true as the story that he played bowls while the Armada was approaching. But who cares? These stories sustain us and make us what we are.

Drake certainly stole colossal piles of gold and precious stones from the Spanish Empire, which had itself stolen them from Latin America. The handsome gold doubloons and moidores which Drake brought home were the beginnings of England’s great age of wealth and power, and chests of them still remained in our vaults till the USA forced us to hand over our gold reserves to them in 1940. Nobody knows what happened to them after that.

So if you now tell me that Sir Francis Drake was a slave trader, my reaction is that I am not especially surprised. But it is not the most important thing about him. We are kinder and better than the men of his age because we can afford to be, not necessarily because we are ourselves superior people.

We still profit from the actions of men we now like to despise. Yet we survive nowadays by bowing and scraping to horrible despots in Saudi Arabia, who we literally cannot afford to offend.

Sir Francis lived in a cruel and violent age in which the defeated were themselves enslaved or murdered. He committed his own crimes, rather than living at ease while letting others commit them for him. I think we need to continue to remember and to some extent revere such figures.

There are no perfect heroes. Seek, and you will find worrying things in the lives of Abraham Lincoln, Winston Churchill, Clement Attlee and other objects of worship. And I hope I shall never live to see a school (or anything else) named after Anthony Blair.

Our heroes are all flawed. Yet, take them for all in all, they were still heroes and we should question ourselves carefully before being sure we are in any position to wipe out their memories from the land.

Sir Francis Drake was an English admiral who circumnavigated the globe – and is recognised as the most renowned seaman of the Elizabethan Age.

Drake joined one of the first English slaving voyages as part of a fleet led by his cousin John Hawkins in 1567, bringing African slaves to work in the ‘New World’.

All but two ships of the expedition were lost when the fleet was attacked by the Spanish – who thus became a lifelong enemy for Drake. 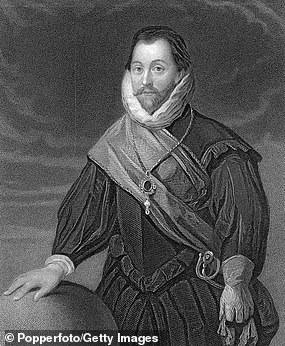 In 1572, the seaman commanded two vessels in a marauding expedition against Spanish ports in the Caribbean. He captured the port of Nombre de Dios on the Isthmus of Panama, and returned to England with a cargo of Spanish treasure.

Following the success of the raid, Drake was secretly commissioned by Queen Elizabeth I to set off from what is now known as Drake’s Island on an expedition against the Spanish colonies in 1577.

Drake reached the Pacific Ocean in October 1578 with only one of his five boats, the Pelican, remaining. He was the first Englishman to navigate the Straits of Magellan.

The seaman used plans created by Sir Richard Grenville, an English sailor who died at the Battle of Flores in 1591, in his expedition.

He travelled up the length of the South American coast, plundering Spanish ports, and hoping to find a route to the Atlantic Ocean.

Drake navigated further up the west coast of America than any European before him, landing on the coast of California in June 1579.

He then turned south in July 1579 and beginning a voyage across the Pacific with his lone ship, now renamed the Golden Hind.

A few months later, he reached Moluccas, a group of islands in the western Pacific, in eastern modern-day Indonesia.

On 26 September, the Golden Hind sailed back into Plymouth with Drake and his 59 remaining crew aboard, along with a rich cargo of spices and captured Spanish treasures.

The sailor was hailed as the first Englishman to circumnavigate the Earth, and he was knighted aboard his ship in April 1581.

THE Soviet tyrant Stalin sometimes went to great lengths to obliterate the past. He ordered all images of his defeated and exiled rival Leon Trotsky to be removed from official photographs, a huge task.

The same thing happened to many other less famous figures who were pictured with Stalin and later murdered on his orders. But this was quite difficult with the technology of the day and the results often look rather fishy.

Nowadays, computer software makes this sort of thing frighteningly easy, as we saw when the former Premier Al ‘Boris’ Johnson was wiped by an unknown hand from a picture of Business Secretary Grant Shapps, posing with a rocket which failed last week thanks to what Richard Branson’s company called ‘an anomaly’. 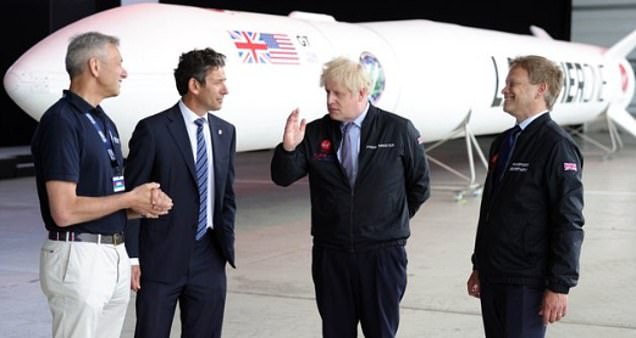 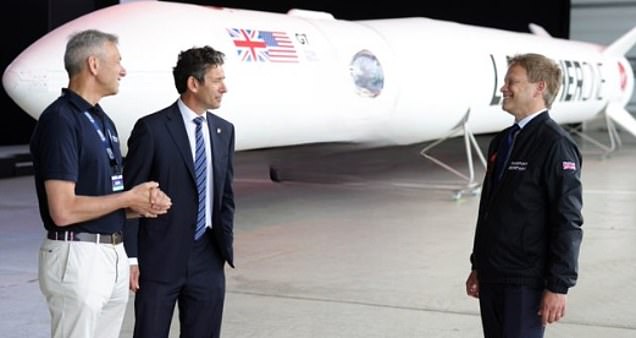 NOW YOU SEE HIM: Boris Johnson in the original picture with Grant Shapps and the doomed rocket – and, right, after he was Photoshopped out

Why might this have happened? Mr Shapps likes being in the Cabinet, and Mr Johnson has become (for now) a Tory unperson who everyone is trying to forget. But Mr Shapps says the wiping was nothing to do with him.

In fact, when the suspiciously doctored and Johnson-free picture was drawn to his attention, he removed the whole thing from Twitter, so wiping the wiped picture.

Perhaps Mr Johnson should be asked if he erased himself from the picture because he did not want to be associated with Grant Shapps.

Who could blame him if so? Mr Shapps is quite embarrassing, being, among other things, the man who introduced the e-scooter plague into this country.

He also had an interesting business career before politics and must be the only person to have ever confessed he had ‘over-firmly denied’ having a second job.

In any case, we now know for sure that it is not just homicidal dictators who doctor sensitive pictures. Bear that in mind in future.