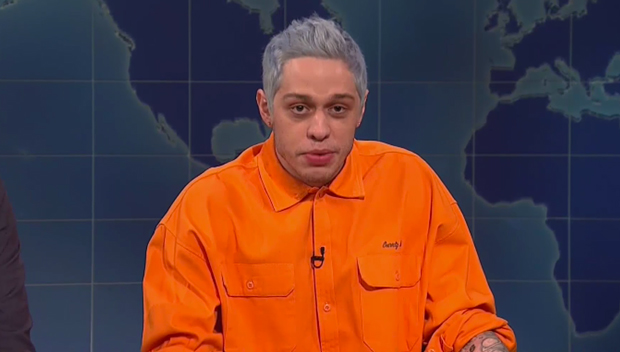 Pete Davidson momentarily opened up about his breakup with Ariana Grande & got a little choked up in the process! Watch what he had to say right here!

Taking to SNL‘s Weekend Update on Nov. 3, Pete Davidson had a sweet message for his ex Ariana Grande, who just released a song about their split, “Thank U, Next”. While on the weekly segment, Pete quickly joked that he had moved back in with his mom, hinting at his breakup with Ariana. However, at the end of his segment, he had some sweet words to say about his ex, and at one point, his voice even warbled discussing his split. He said, “And the last thing I will say is I know some of your curious about the breakup but the truth is it’s nobody’s business and sometimes things don’t work out, and that’s OK. She’s a wonderful, strong person, and I genuinely wish her all the happiness in the world. Now, go vote on Tuesday.” We’re not crying, you’re crying. Watch the Weekend Update moment below!

Following Kanye West‘s controversial rant at the end of SNL, Pete slammed him for not taking his meds. “Kanye, I know you’re like, ‘Yo, this is the real me. I’m off the meds.’ Take them. There’s no shame in the medicine. I’m on them. It’s great,” he said. “Being mentally ill is not an excuse to act like a jacka**.” He added, “Nobody told him not to wear it. I wish I bullied you. I wish I’d have suggested it might upset some people like your wife, or every black person ever.”

And before his untimely split with Ariana Grande, Pete talked about his relationship with her on Weekend Update. However, during his appearance, he made one joke that some felt went too far. “Last night I switched her birth control with Tic Tacs. I believe in us and all, but I just want to make sure that she can’t go anywhere,” he remarked. Needless to say, some people were not very happy with that remark.

We’ll keep you posted with all of the latest SNL sketches. In the meantime, check out all of the pics from the 44th season in our gallery above!