Paul Westphal, the Basketball Hall of Fame guard who played for the Boston Celtics’ 1974 N.B.A. champions, became a four-time All-Star with the Phoenix Suns and coached them to the league playoff final in 1993, died on Saturday. He was 70.

Westphal, whose death was confirmed by the Suns, was found to have brain cancer in the summer of 2020.

Westphal was an outstanding shooter with both hands and a fine playmaker and defensive player. He played in the N.B.A. for 12 seasons, also with the Seattle SuperSonics and the Knicks. He was a head coach for all or part of 10 seasons, with the Suns, Seattle and the Sacramento Kings, and an assistant coach with the Dallas Mavericks and the Brooklyn Nets.

He was inducted into the Naismith Basketball Hall of Fame in Springfield, Mass., as a player in 2019.

The Celtics selected Westphal in the first round of the 1972 N.B.A. draft, the 10th player chosen over all.

One of his finest games with Boston came in the 1974 N.B.A. championship finals against the Milwaukee Bucks.

Westphal scored 12 points in Game 5 and played stifling defense against Oscar Robertson, one of the N.B.A.’s greatest players, who made only 2 of his 13 shots. The Celtics won, 96-87, on the Bucks’ court and captured the series, four games to three.

But Westphal was mostly a reserve in his three seasons with the Celtics, since they had outstanding guards in Jo Jo White and Don Chaney. They traded him to the Suns in May 1975 for Charlie Scott, the future Hall of Fame forward, and draft picks.

Westphal was back in the playoff finals in 1976, this time playing for Phoenix against Boston. He scored 25 points in Game 5, though the Suns were beaten, 128-126, in triple overtime in what has been called “the greatest game ever played.” The Suns lost the series, 4 games to 2.

Westphal played for the Suns from 1975 to 1980 and again in his final season, 1983-84. He played with the SuperSonics in 1980-81, when he gained his fifth All-Star selection. The Knicks signed him midway through the 1981-82 season, though he was still recovering from a stress fracture of his right foot incurred when he played for Seattle. 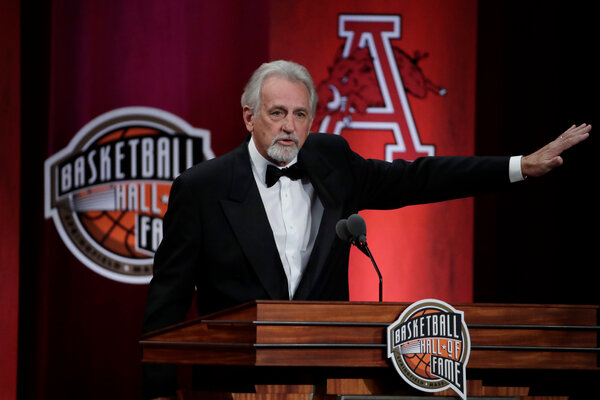 In November 1982, Westphal got a taste of the New York-based television world when he had a small role as a police officer on ABC’s daytime drama “The Edge of Night.”

“I’ve never had any acting experience, except for trying to draw fouls during basketball games,” he told The New York Times. But, as he put it, “since basketball players and actors are both pampered and spoiled, I think I would have no trouble making the change to acting.”

He never did pursue an acting career, but he won the N.B.A.’s Comeback Player of the Year Award for 1982-83, when he helped take the Knicks to the second round of the playoffs, appearing in 80 of their 82 games and averaging 10 points a game, having recovered from his injury with Seattle.

After his playing days, Westphal coached at several western colleges, including Grand Canyon University in Phoenix, taking the school to the 1988 NAIA national championship.

He was an assistant coach with the Suns for four seasons before he was named head coach in 1992-93, when they posted the N.B.A.’s best regular-season record at 62-20, led by Charles Barkley, the league’s most valuable player, along with Dan Majerle, Kevin Johnson and Danny Ainge. But the Suns lost to Michael Jordan’s Chicago Bulls in a six-game championship final.

Westphal coached several outstanding Suns team afterward but was fired in January 1996 when the Suns, riddled with injuries, were playing poorly.

He coached the SuperSonics and the Kings for all or parts of three seasons each and closed out his coaching career as a Nets assistant from 2014 to 2016.

Paul Douglas Westphal was born on Nov. 30, 1950, in Torrance, Calif., a son of Armin and Ruth Westphal. His father, an aeronautical engineer, and his older brother, Bill, shot hoops with him in the family’s driveway when he was a youngster.

He was a basketball star at Aviation High School in Redondo Beach, then played for the University of Southern California for three seasons. He averaged 16.4 points a game and was voted as a second-team all-American in The Associated Press poll for 1971.

Westphal’s survivors include his wife, Cindy; their daughter, Victoria, and a son, Michael. A complete list of survivors was not immediately available.

“In training camp, he told us his greatest asset would be his ability to relate,” Kevin Johnson told The Seattle Times in February 1999 when Westphal was in his first season as the Sonics’ coach. “He was a rookie, he was an All-Star, he was a free agent, he got waived, he was traded, he got old. He’s been through every possible experience.”

“I hoped to be a player, but always planned on being a coach,” Westphal said. “I was able to play for 12 years and postpone my coaching career.”