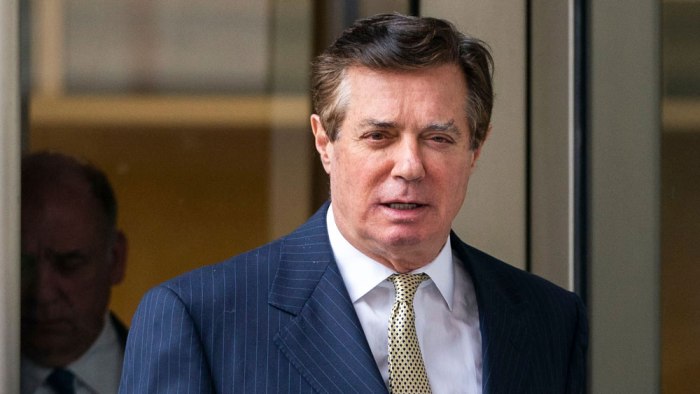 WASHINGTON — Paul Manafort, President Donald Trump’s former campaign chairman, was sentenced to an additional 43 months in prison to a series of charges brought by special counsel Robert Mueller, adding to a 47-month sentence that was imposed in a separate case in Virginia last week.

U.S. District Judge Amy Berman Jackson imposed a sentence of 60 months on one count, but half of that will run concurrently with the Virginia sentence. She also imposed a 13-month sentence on another count, which will run consecutively to his other sentences.

Given the time that he has already served, Manafort faces almost seven more years in prison.

Appearing in a wheelchair and in a dark suit, his hair gray, Manafort addressed the court before his sentencing, telling the judge that he had time to reflect as he was in solitary confinement and that “my behavior in the future will be very different. I have already begun to change.”

“Let me be very clear: I have accepted responsibility for these acts that have gotten me here today,” Manafort said, reading from a statement. He said he was “ashamed and embarrassed” for the impact that the case has had on his family and friends.

“I pledge to do all I can to accelerate the healing process,” he said.

He pleaded for compassion from Jackson, noting that he was nearing 70 and serves as his wife’s primary caregiver. He pleaded with her to “please let my wife and I be together.” He asked that she not impose any more time than the 47-month sentence he received last week in a separate case that Mueller’s team brought in Virginia, for tax and mail fraud charges.

Last fall, Manafort reached a plea agreement with Mueller’s team, but he potentially faced a harsher sentence after prosecutors said, in their subsequent conversations with him, he lied about the nature of his contacts with Konstantin Kilimnik, a business associate suspected of having ties to Russian intelligence. The federal judge in the D.C. case, Jackson, concluded that Manafort gave false information, and on Wednesday she again rejected defense attorneys’ efforts to get her to reconsider.

Manafort, 69, was convicted in August by a jury in Virginia federal court of eight of 18 charges having to do with his political consulting business and work he did on behalf of a pro-Russia government in Ukraine. He was found guilty on five tax fraud charges, two counts of bank fraud, and one charge of hiding foreign bank accounts.

The next month, Manafort faced another trial in the D.C. federal court, on charges that included failing to register as a foreign lobbying agent for the government of Ukraine. But he reached Mueller’s team, and pled guilty to two counts of conspiracy. The agreement required him to cooperate with Mueller’s team on their investigation into Russian interference in the 2016 election and whether there was collusion by members of the Trump campaign. He agreed to forfeit assets, including four homes and money held in bank accounts.

At Wednesday’s hearing, Andrew Weissmann, a member of Mueller’s team, argued that Manafort “engaged in crime again and again,” and dismissed the idea that his failure to register as a foreign agent was more than merely failing to file paperwork. He said it was part of a conspiracy that included a misinformation campaign to boost the Russian-backed government in Ukraine, as well as money laundering and tax violations. Then, he noted, after Manafort was indicted and charged in 2017, he engaged in witness tampering, “crimes that go to the heart of the American criminal justice system.” After he pled guilty, he said, Manafort then lied to the FBI and a grand jury even though he had agreed to cooperate.

“He has not learned a harsh lesson,” Weissmann said.

Manafort’s team said even though Manafort failed to register as a foreign agent, he did communicate with U.S. State Department officials in Kiev in 2013, suggesting that the government at least had some awareness of what he was doing.