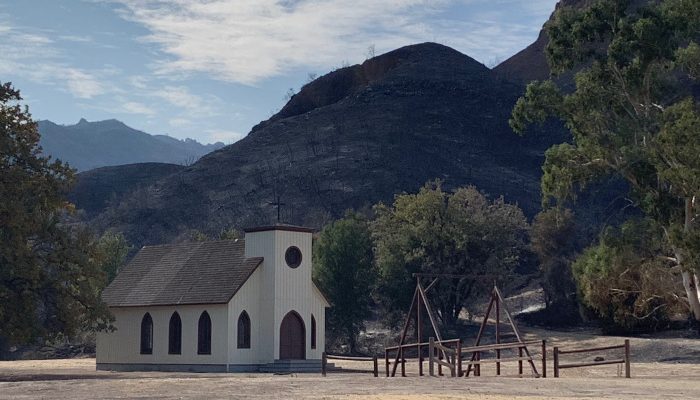 The National Park Service hopes to rebuild Western Town at Paramount Ranch within two years, and is looking to Hollywood to help contribute to a fundraising campaign.

The historic location near Agoura Hills — where productions like HBO’s “Westworld” and “Dr. Quinn, Medicine Woman” were filmed — was destroyed in the Woolsey Fire last week.

David Szymanski, the superintendent of the Santa Monica Mountains National Recreation Area, led reporters on a tour Friday to see what remained in the fire’s wake. The church set constructed for the recent hit “Westworld” stayed intact, and a train station used for “Dr. Quinn,” a television show from the 1990s, also still stands. However, the set for the HBO drama’s Main Street scenes was reduced to debris and rubble, while exposed pipes and metal sheets were among remains from “Dr. Quinn.”

The Santa Monica Mountains Fund, a non-profit that supports the park, is partnering with the park service to launch the “Paramount Project” to rebuild Western Town. In the short term, temporary sets will be built to operate productions, followed by construction of permanent structures, Szymanski said.

He said trail areas have been assessed, and next steps include putting barricades up where debris was deposited and conducting archaeological work to recover valuable materials from the Paramount era. Those actions will have to be taken before any construction can start.

Szymanski told Variety it’s unclear what percent of Paramount Ranch’s total 765 acreage was destroyed, and that aerial shots taken in the next few weeks will give a better picture of just how much was lost. Ana Cholo, a media representative from the Santa Monica Mountains National Recreation Area, told Variety that they are hoping to reopen Western Town to the public shortly after it is rebuilt in two years, but noted that these are still rough estimates. In addition to serving as a filming location, the area was used for weddings, concerts, and other events.

Members of the entertainment industry have already contacted the fund and the National Park Service to help with the rebuilding effort, said Sara Horner, the fund’s board president. She declined to name them. Horner did say that in the beginning of December, members of the film community, particularly location managers, will participate in an informal roundtable to discuss how best Western Town can be used to serve industry members’ needs and remain operational for production shoots. For now, it is still unclear how much the campaign will need to raise.

Horner also said even before Western Town burned down, there was a plan in place to upgrade utilities on the site. And during the rebuilding process, those in the rebuilding campaign will have to rethink the way previous structures were situated, in order to make it easier for filming.

First started by Paramount Pictures in 1927, the ranch had been the site of more than 300 productions throughout the years, ranging from Cary Cooper films in the first half of the 20th century, to Sandra Bullock’s “The Lake House” in 2006. More recently, television shows like “The Mentalist” and “Weeds” have all shot in Western Town. The park service has owned the property since 1980.

Horner said the ranch is a connection to film history, and that it’s important Hollywood stays connected to the property so it doesn’t “just disappear.”

“[Paramount Ranch] represents a part of our common past,” she said. “In this time of so much rapid change, to care for and love our own community history, is restorative to all of us.”