A couple have revealed how they created an exciting adventure park for their children in their back garden using budget-friendly buys found on social media.

Lisa Town and Craig Turrell, both 29, who live in Lancing, with their children Jayden, six, and Sophia, one, decided to transform their backyard after it became overrun with wildlife.

The couple had become frustrated with their children’s toys being spread everywhere and had no excuse not to make use of the space after foxes, who had a den the family didn’t want to disturb, moved on.

‘The area was a fox’s den for seven years. We didn’t do anything to the space as we didn’t want to disturb them. As a result, the area filled up with brambles, stinging nettles, comfrey and bindweed. It also had a broken concrete path,’ Lisa said. 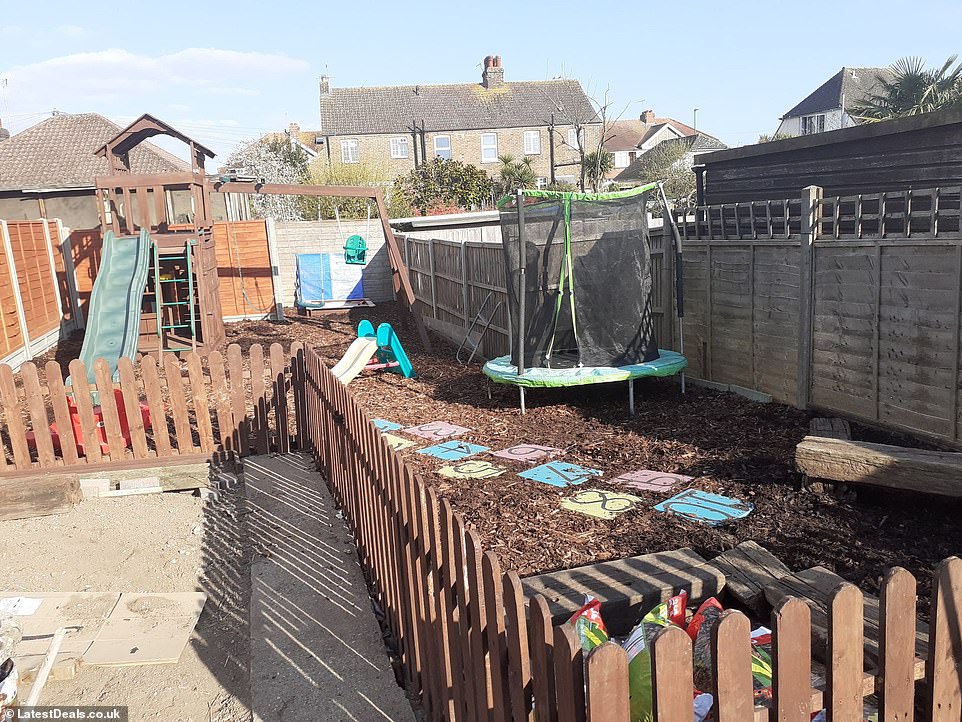 Lisa Town and Craig Turrell, both 29, who live in Lancing turned their garden into a playground for their children with just over £200. The completed playground features a swing and slide set, a trampoline, hopscoth and  a wooden bench in a fenced off area where the children can play to their hearts’ content 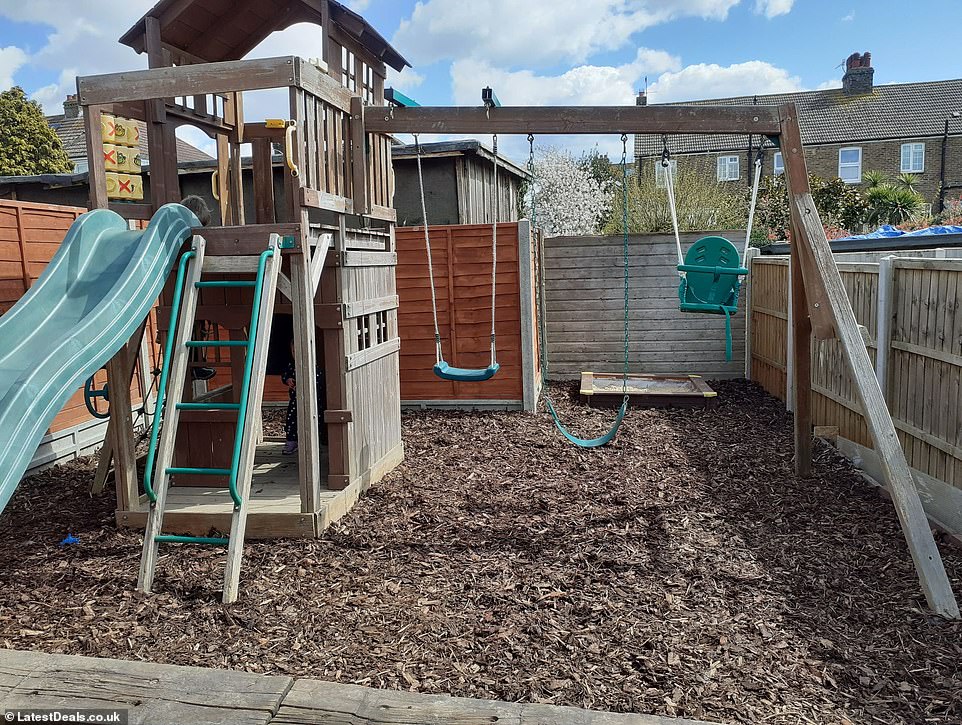 The couple were able to save money by shopping on Facebook Marketplace and a lot of the items they needed were picked up free of charge, such as the climbing frame 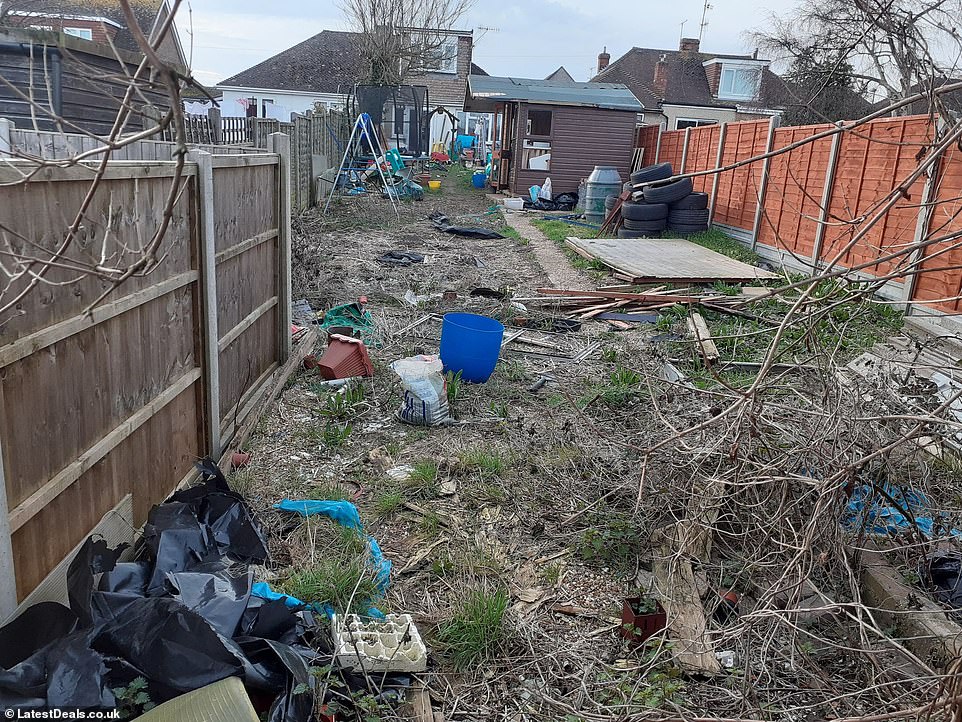 Lisa said they had avoided working on their garden for the past few years to avoid disturbing a fox’s den, but the space had become overgrown and messy with toys strewn everywhere

‘Plus, as our house is much higher than our neighbours’, we had to build a new wooden wall to stop the mud from falling onto their fence and breaking it.’

Lisa recently realised it would be easy to take back control of the garden, saying: ‘Our neighbour cut down two really big conifer trees, which made the foxes leave.

We then didn’t have an excuse anymore – we needed to do something with that area.

‘We didn’t like the kids’ toys being spread around everywhere so we thought a park would be great to keep everything in one area – plus it would prevent the need for flowers which would inevitably get trampled on.’

Lisa and Craig said sourcing supplies once they started building the adventure park ended up being a very cheap process.

Lisa said: ‘The climbing frame was given to us for free, and we already had the sand pit – we just repainted it.

‘We picked up the trampoline for free from Facebook Marketplace, and the hopscotch was for sale there for £10. 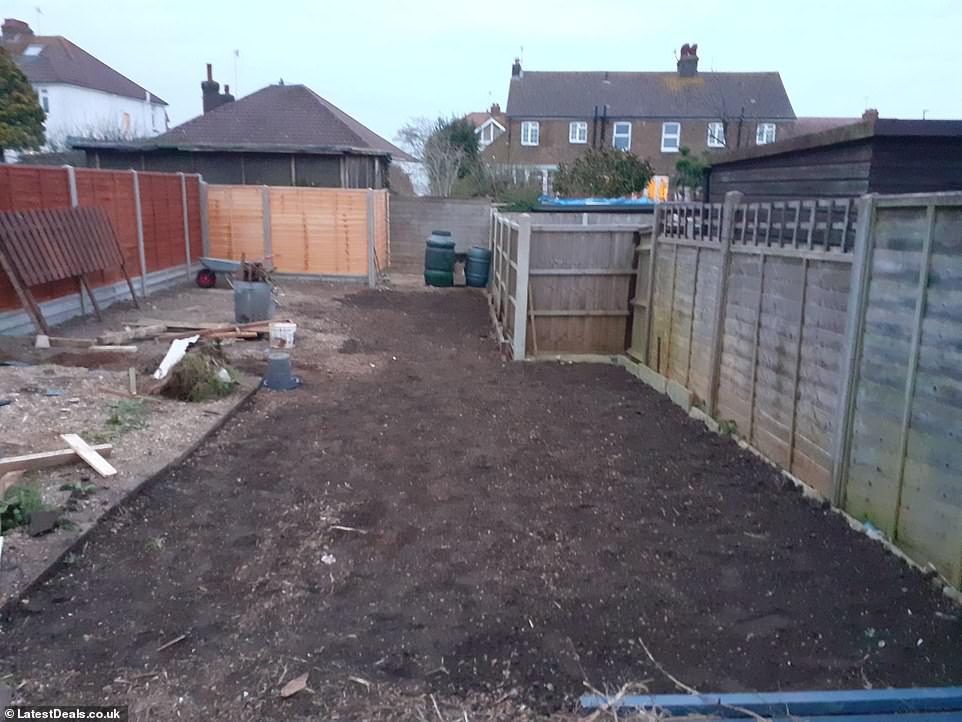 Lisa said they decided to transform the garden into an adventure park because they didn’t like having their children’s toys spread around everywhere. Pictured: Garden during transformation 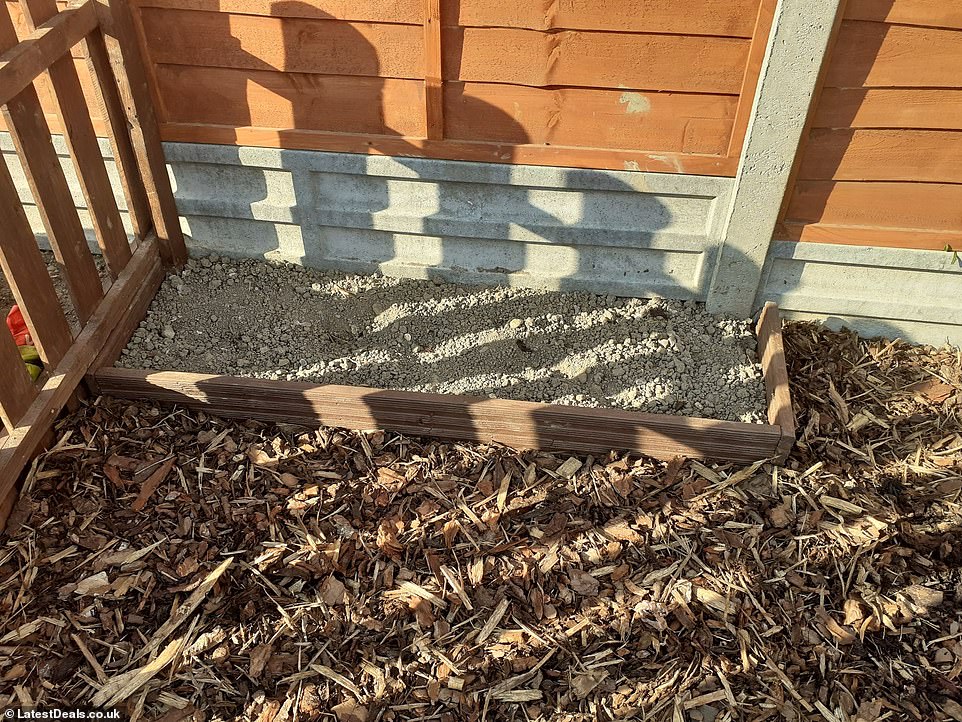 Lisa got the supplies needed to make a flower bed free from Facebook Marketplace. She said that creating the playground meant most of the garden could be free from flowers that would only get trampled on 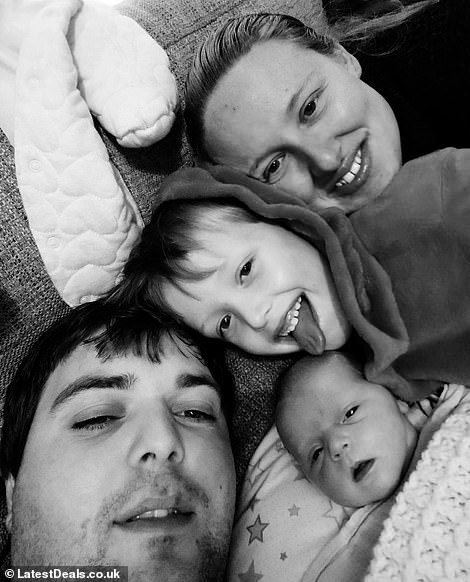 Lisa Town and Craig Turrell, with Jayden, six, and Sophia, one

‘The balancing beam was free and someone was throwing away the sleepers. Then we made the fence out of pallets.

‘We decided to put flowers in a wooden bed to protect them, and we got those supplies for free off Marketplace.

‘The lining was free because we used cardboard from my partner’s workplace, and people were throwing away ton bags so they were free for us too!

‘The most expensive item turned out to be the bark, which we got from Asda.

‘After pricing up trampolines, climbing frames and so on online we think we saved over £1,000 by salvaging bargains from Marketplace!’

Once the supplies were ready, it was time to start building. 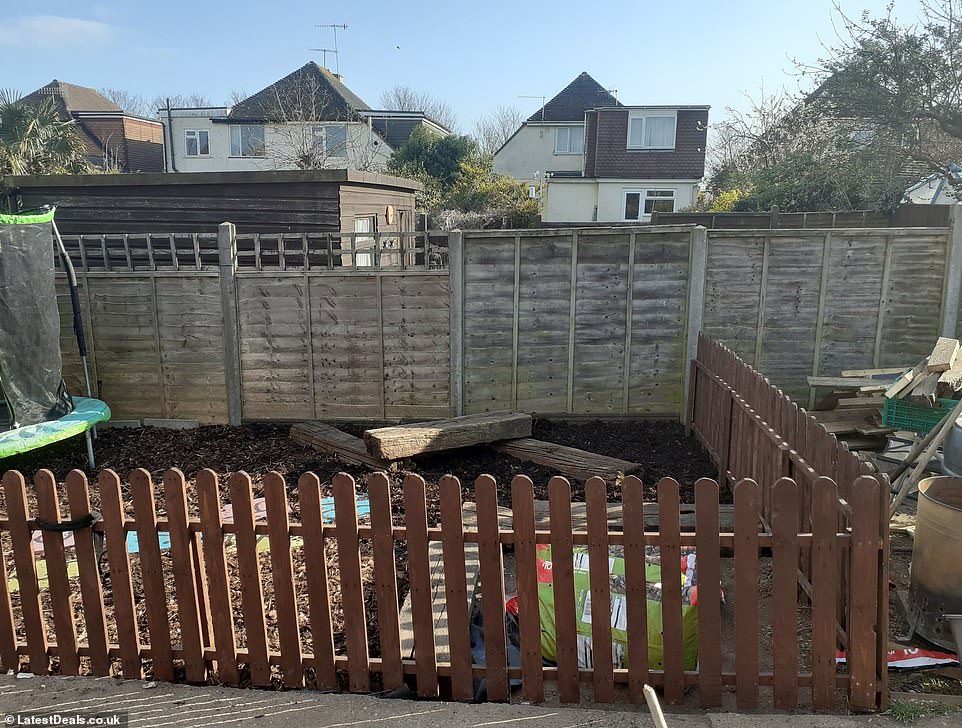 Lisa explained after pricing up everything in their adventure park, they saved more than £1,000. Pictured: Garden during transformation. The couple saved on fencing by making it out of wooden pallets

She continued: ‘First we had to cut down all the weeds so we could dig them out. We then had to smash up and remove the smashed path.

‘The next step was to dig and level out the ground as it has a two-way slope. We then had to make a wooden wall and stake that at the edge to stop the earth from falling and breaking next door’s fence.

‘It was then time to strip the pallets and cut each one to length before rounding off the ends. We sandpapered each one and screwed them into place to make the fences. 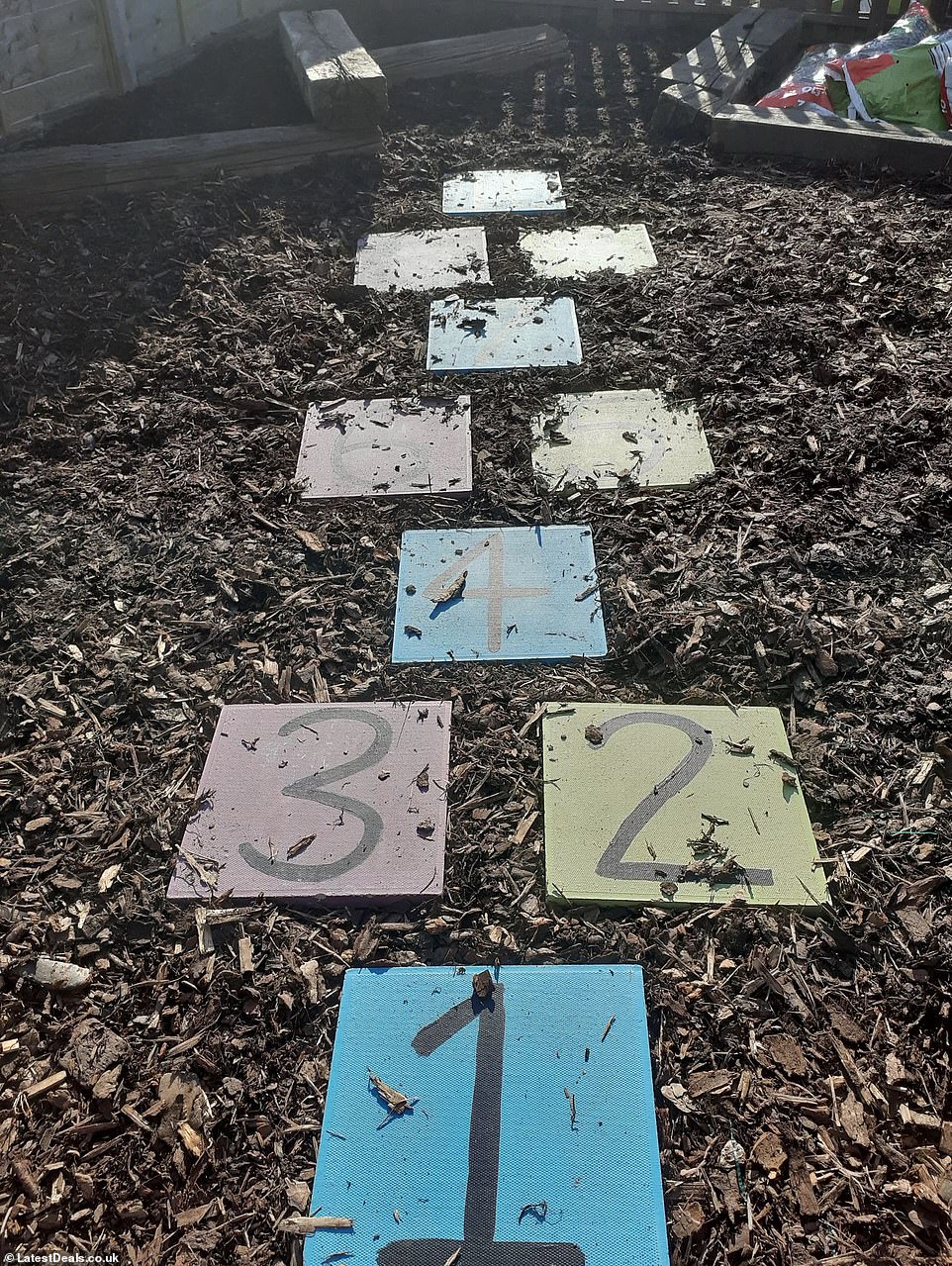 Lisa said the final part of the overhaul was putting up the trampoline, hopscotch (pictured) and balancing beam. The hopscotch cost just £10 from Facebook Marketplace

‘We then had to box, line and bark individual sections at a time as we kept running out of boxes, ton bags and bark. That was probably one of the main challenges we encountered, along with digging up the concrete and making the fence.

‘The climbing frame was next – that went up, and then we put the sand pit down. We painted both and then placed bark in that area. We put the sleepers around the edge to hold the lining down until we got more supplies.

‘We then boxed and lined the rest of the area. Finally, we put the trampoline, hopscotch and balancing beam in place and finished up by placing the bark in that section.’

Tom Church who is co-founder of LatestDeals.co.uk, added: ‘Lisa and Craig have done a great job of transforming their backyard. This adventure park is a great way to keep their little ones entertained, especially as the summer months are just around the corner.

‘Sourcing supplies from online marketplaces and friends or family is such an effective way to keep costs down – one person’s trash is another’s treasure!’