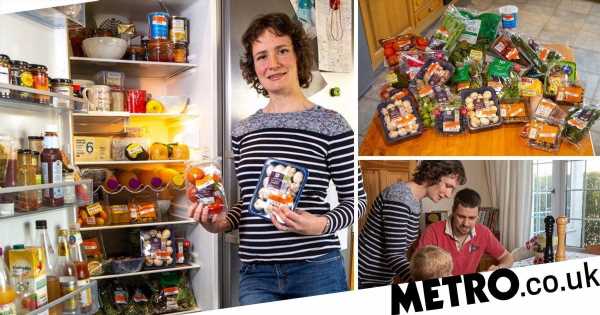 The small family also forages in the fields near their home for wild spinach and blackberries.

Buying in bulk, such as a whole pig to be stored in one of their three huge freezers, also helps to keep costs down.

‘Some weeks we don’t have to buy anything as we have so much stashed away, so we just don’t spend anything at all on food,’ said Laura.

‘Or others it might just be buying a few pints of milk. Some weeks, we can spend as little as £3 or £4, and that would just be on milk if we’ve run out and a few punnets of grapes, salad leaves and cherry tomatoes.

‘Everything else we’ll already have in the freezer or store cupboards. The cheapest week we have had was when we literally spent nothing.

‘We had milk in the freezer and had just used everything we already had. Now that I’m making my own bread that also really helps to keep costs down.

‘Before we started this lifestyle we would probably have splashed out on really nice cheeses or a lovely piece of steak every so often.

‘The best place that I’ve found for bargains is Co-op convenience stores, their reduced sections are amazing.’

Having three freezers ensures they can store all the finds, explained Laura.

‘Our son Wilf adores blackberries so we go for a wander to pick those with him almost every day in the summer to the nearby hedgerows when they’re in season,’ she added.

Laura says her husband Max is ‘well equipped to asses on sight if the meat is safe’ to take home and butcher.

She said she has made some lovely meals out of roadkill deer.

And it’s not just food items they save on – the family also recycle and repair clothes rather than buy new ones.

They have also chosen not to have a television and use an old laptop as well as second-hand furniture.

The thrifty couple uses a John Lewis credit card, which means that they get vouchers which they can spend in Waitrose for the occasional treat.

The couple is now in the process of converting an old van so that they can have cheaper holidays too.

MORE: Family sells four-bedroom home to live in a renovated school bus and travel the country

The daily lifestyle email from Metro.co.uk.