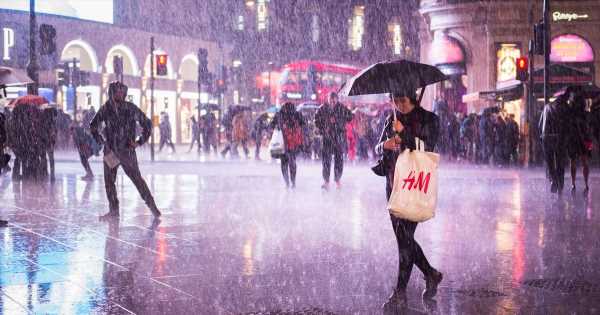 More than one month's rainfall will batter parts of the UK in less than 24 hours tomorrow, forecasters say.

The Met Office has issued yellow weather warnings for rain most of southeast England.

Simon Partridge, forecaster for the group, told Mirror Online: "We will get heavy bursts. We possibly could get 2.5 inches (60mm) in the southeast on higher ground.

"There's potential for that to fall as it will be a very wet day for the southeast. It'll be unseasonably wet.

"The average rainfall for June is 52mm (2.04 inches) in the southeast.

"It could be that heavy anywhere from east Oxfordshire right across to East Anglia."

There is a small risk of flooding in these areas and commuters may face travel disruption.

The remnants of Spanish Storm Miguel have brought mostly wet conditions, which some of them could be heavy and thundery.

Temperatures will vary between 9 and 18 degrees, but generally feel warmer and more pleasant due to much lighter winds compared to today.

And the miserable conditions for those areas will remain roughly the same as a second yellow rain warning has been issued throughout Tuesday.

By Wednesday, the rain is expected to move northwards, affecting coastal areas from Hull to Newcastle.

The warnings for rain has been issued for those areas on Wednesday and Thursday.

It will be a day of sunny spells and scattered showers. Northern and western areas are likely to see the most showers, and some of them could be heavy and thundery. Lighter winds than on Saturday, making it feel warmer.

Showers will largely die out, except in some far western areas. Persistent and locally heavy rain will spread into eastern and southern England through the night. Turning chilly.

Outlook for Tuesday to Thursday:

Heavy and persistent rain will continue for many, particularly across eastern England. Heavy and thundery showers, especially in the south. Driest and brightest across the northwest. Often cool and windy.