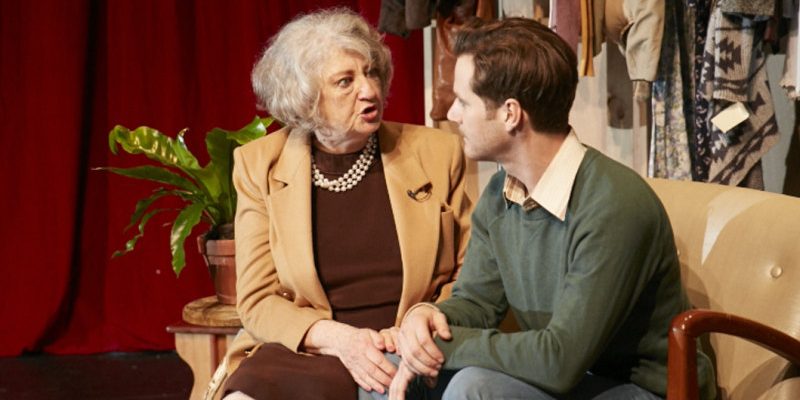 Isaac Adams is Jewish. Secular, American, non-kosher, hasn’t prayed since his Bar Mitzvah. But still Jewish. So when his chiksa wife unthinkingly boasts of ‘jewing’ $200 off the price of a new sofa, it is a body blow to him and, ultimately, to their marriage. One word, so many questions. 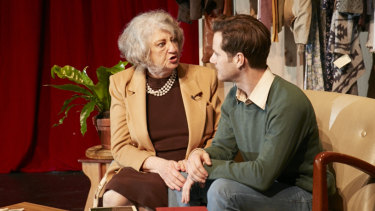 God of Isaac is a fond and funny portrait of one man’s quest for identity which, almost by accident, poses urgent questions about how we make sense of the world. The central character, Isaac Adams, a likeable, thoroughly convincing Lloyd Allison-Young, carries the story, dipping in and out of memories which are richly peopled, with the help of lightning fast costume changes and virtuosic juggling of voices, by Alexis Fishman, Claudia Ware and Tim McGarry.

The racks of clothes on either side or the stage (designed by Hugh O’Connor) are an obvious but effective metaphor as Isaac seeks answers from a Rabbi, a Hasid, a tailor and his father, played, with lovely nuance, by Tim McGarry. So too is the red velvet curtain at the back, which opens to reveal Isaac’s chaotic inner world, where he recasts literary heros – Huckleberry Finn, the Wizard of Oz, and a dazzling Eliza Doolittle from Fishman – in Jewish terms. Stereotypes matter: they are all part of how we see ourselves.

The crucial design element, however, is the Fourth Wall or, rather, its crumbling remains. Within seconds of the lights going up, Isaac’s mother calls out to her son from her seat in the third row of the audience, shattering the wall and inviting us all, Jews and goys alike, into the conversation. Annie Byron portrays Mrs Adams with exhilarating chutzpah and effortless comic timing, which Allison-Young bounces off with deliciously excruciating embarrassment.

The only misstep in this mild-mannered but thoughtful comedy comes in the closing scenes, as Isaac ties up loose narratorial ends and opts for an answer to his big quest which feels over-simplistic. For if we have learned anything over the course of this thoroughly entertaining evening, the answer is never simple.

God of Isaac runs until September 22.