The world may have grown accustomed to seeing Olympic gymnasts wearing leotards as they compete for the highest honor in the sport, but these garments haven’t always been the first pick for women.

Here’s how gymnastics attire has changed form in the last century, starting from present-day.

Leotards remain the dominant uniform for competitors during the Tokyo 2020 Summer Olympics, but artistic gymnasts on the German Olympic team have made headlines for wearing unitards as a form of protest against “sexualization in gymnastics,” according to the German Gymnastics Federation. 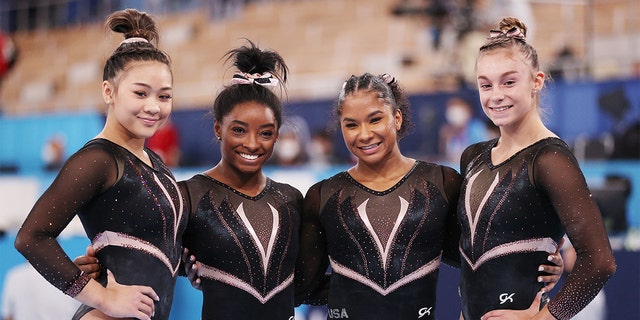 Sunisa Lee, Simone Biles, Jordan Chiles and Grace McCallum of Team USA pose for a photo during women’s podium training ahead of the Tokyo 2020 Summer Olympics on on July 22, 2021. They sported black and white leotards that were embellished with rhinstones at the Ariake Gymnastics Centre in Tokyo, Japan.
(Photo by Patrick Smith/Getty Images)

Unitards have been seen in rhythmic gymnastics competitions in decades past while leotards have been the go-to for artistic gymnasts who compete in floor exercises, uneven bars, balance beam and vault.

German Olympic gymnast Sarah Voss, who is competing during 2020 Olympics, told the BBC she felt “uncomfortable in the usual outfits,” when her team first donned their unitards in April. 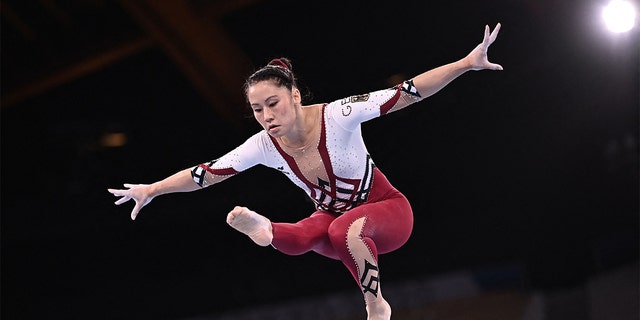 Germany’s Kim Bui competed in the artistic gymnastics balance beam event for the women’s qualifier during the Tokyo Summer 2020 Olympics. She performed her routine at the Ariake Gymnastics Centre in Tokyo on July 25, 2021.
(Photo by Lionel Bonaventure / AFP via Getty Images)

“As a mother of four kids and three of them young daughters, I love the trend of unitards coming back in the forefront of gymnastics,” the four-time Olympic medalist said.

Dawes, who was part of the gold-winning, “Magnificent Seven” team at the 1996 Summer Olympic Games held in Atlanta. Georgia, said she once had worn an all-gold unitard as well as a black and red one with long sleeves and leggings.

“I loved the way it made me feel,” she noted. “Hopefully the trend will take off and hopefully young girls will embrace it…I think that most mothers will…Especially [what’s] come to light in the sport with sexualization and sexual abuse – leaning to the side of caution and modesty, and to protect our young girls.”

When the London 2012 Summer Olympics came around, female gymnasts were sporting shinier leotards with deeper pigment.

Strotbeck added, “And finally – the use of heat application has allowed gymnasts to accessorize their uniform to their heart’s content.”

Through these manufacturing processes, custom coloring and rhinestone embellishments became a prominent leotard style among competitors, including Team USA and the Italian Olympic team.

Long-sleeved and vibrantly colored leotards continued to be the norm by the time the Athens 2004 Summer Olympics rolled around. 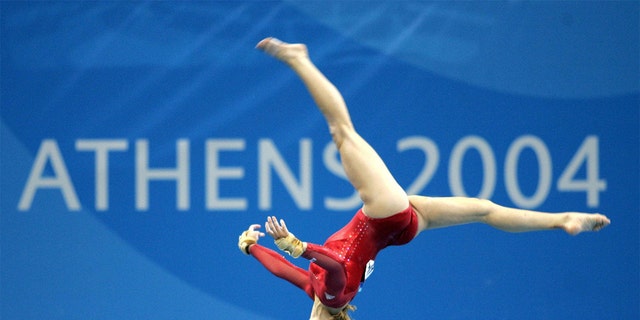 For Team USA, the American flag remained a source of inspiration for leotard designers at the Atlanta 1996 summer Olympics.

Dawes, who played a critical role in Team USA’s “Magnificent Seven,” said her 1996 red leotard with white stars was a standout during her Olympic career.

“That was following my fall in the all-around competition which was obviously a very painful experience in my career and to come back from that,” Dawes recalled, in reference to her floor exercise. “That red velour leotard definitely holds a special place in my heart.”

Dawes took home an individual bronze for her 1996 floor exercise performance, becoming the first, Black American woman to medal in her sport. She went on to donate her American flag patterned leotard to the Smithsonian and recently took her four kids to see it.

Shannon Miller, Dawes’ teammate, told Fox News she remembers going through several leotards during her Olympic career. The 1996 American flag leotard is a standout in her opinion because it was an ode to the 1984 design Team USA wore to the Los Angeles Olympics.

Other leotard styles she recalled wearing included a crush velvet and a foiled silver. Early on in her career, Miller would make her own leotards and her coach would help accessorize it.

“Finding fabric that had two-way stretch was so important,” she said. Miller noted her coach once “individually glued on crystals” to her leotard and scrunchie. The gems eventually fell off, but it was a way to dress up her competition look. 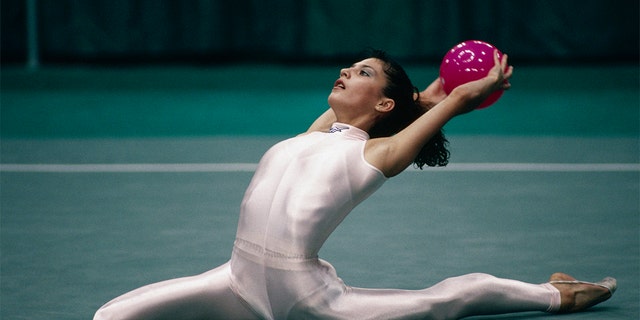 Ukranian rhythmic gymnast Elena Vitrichenko performed her floor routine at the 1996 Olympic Games in a silver, sleeveless unitard. The outfit is not commonly seen in artistic gymnastics.
(Photo by Franck Seguin/Corbis/VCG via Getty Images)

“It was in the ’80s where gymnastics uniforms, leotards, really began to become performance pieces of art,” Strotbeck said. 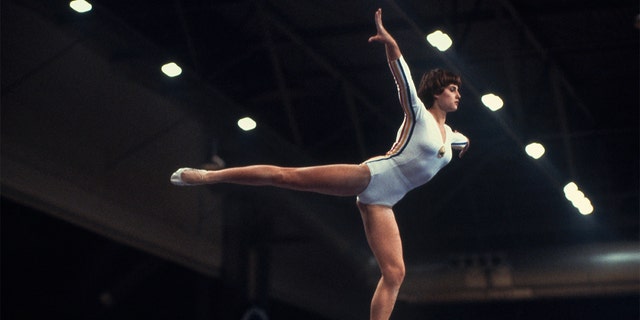 Nadia Comaneci from Romania competed in the balance beam event at the Moscow 1980 Summer Olympics with a white leotard that had colorful stripes that represented her home country.
(Photo by Giuliano Bevilacqua/Sygma via Getty Images)

By the Los Angeles 1984 Summer Olympics, competitors demonstrated their patriotic pride with overt national flag prints or colors. Team USA sported the stars and stripes of the American flag on their leotards along with red, white and blue getups. Other countries opted for simpler stripes and color blocks inspired by their national flags, including Germany, Romania and Great Britain. Non-flag-related bright colors were also popular picks during this time, which is a trend that continued on into the Seoul 1988 Summer Olympics.

Color-blocking became a popular leotard design trend during the Munich 1972 Summer Olympics. Long sleeves also became a mainstay among Olympic leotard wearers, according to several photos taken during the games. 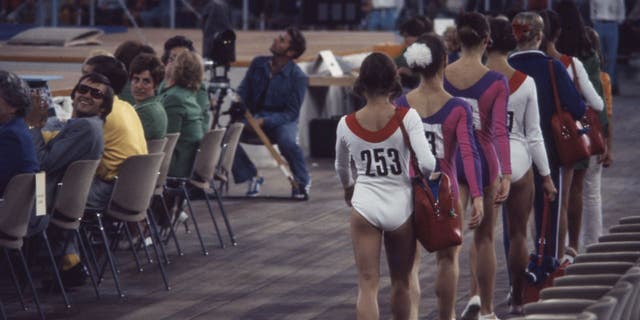 The leotard’s design largely remained unchanged when the Tokyo 1964 Summer Olympics, though Strotbeck says competing athletes were allowed to get more creative than their predecessors.

“In the 1960s self-expression began to take shape in gymnastics as athletes could design their leotards to fit their own image, within reason,” he explained. 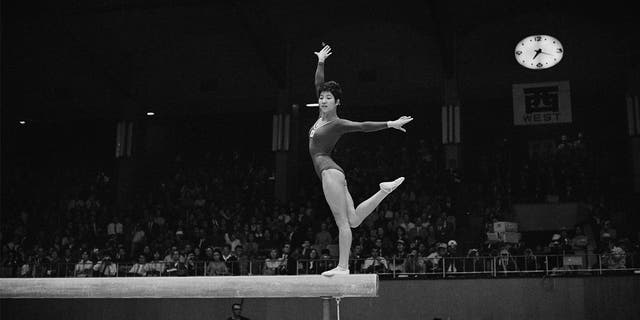 Leotards became more of a mainstay during the Melbourne 1956 Summer Olympics, but unlike modern-day trends, these garments were simpler in design. 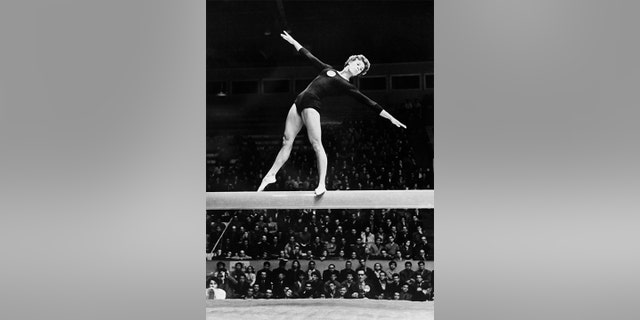 Soviet Olympic gymnast Larissa Latynina performed her routine on the balance beam during the Melbourne 1956 Olympic Games, which was held between November and, December that year. Latynina went on to win four gold medals in Melbourne.
(AFP via Getty Images)

Soviet Olympian Larissa Latynina wore a few dark-hued leotards when she performed her balance beam routines. Each leotard featured small logos that weren’t distracting to the overall piece of apparel.

By the time the London 1948 Summer Olympics came around, gymnastics uniforms began to look more like the leotards the world has grown familiar with in recent decades.

“Synthetic fabrics were invented in the late ’30s and ’40s, which along with fashion influences, allowed athletes to wear competition gear that was more form-fitting,” Strotbeck said. “Though still baggy, more of the athletes’ body was exposed to the public.” 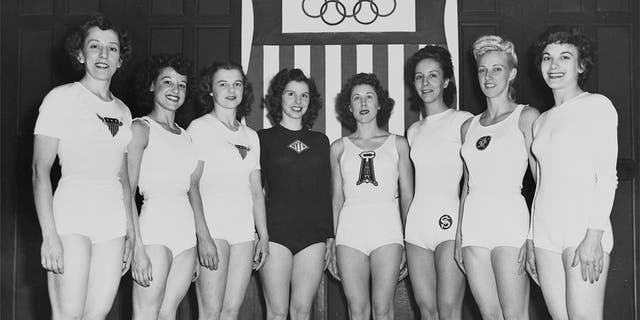 Female gymnasts chosen for Team USA during this time wore leotard-like garments that had varied sleeve lengths and necklines. In contrast, the British Olympic team had looser-fitting shorts that were also longer in length.

When women made their competitive Olympic debut in gymnastics at the Berlin 1936 Summer Olympics, they switched out dresses for shorts and shirts.

“In the first half of the last century, gymnasts wore gear that looked and fit more like casual baggy clothing than competitive gear,” Strotbeck said. 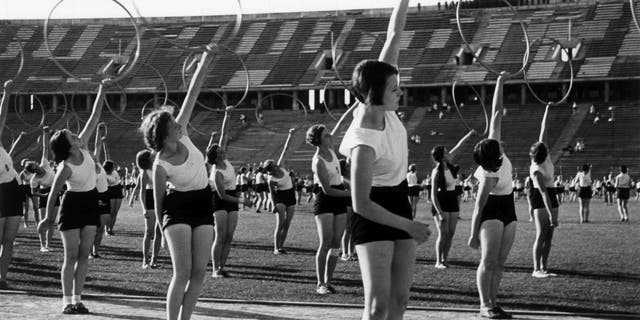 Female artistic gymnasts of this time wore a boxy short and shirt combo where tops were either short or sleeveless, as seen in captured photos of U.S. Olympian Consetta Caruccio, Yugoslavia Olympian Angelina Kopurenko and the German Olympic team. In some cases, gymnasts donned belts as well. 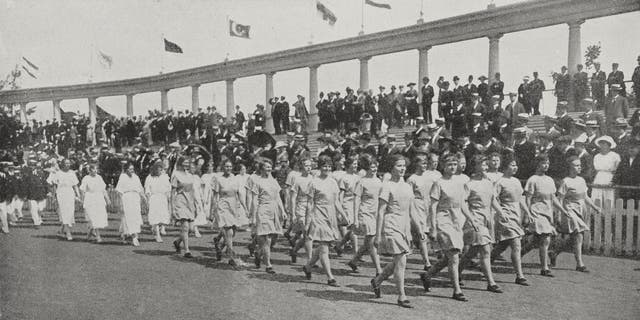 Danish gymnasts paraded at the Games of the VII Olympiad in Antwerp, Belgium, August 29, 1920. This image was published in the L’Illustrazione Italiana, a Milan-based weekly magazine that operated between 1873 and 1962.
(Getty Images)

Black and white photos of Danish gymnasts parading through the Olympisch Stadion during the Antwerp 1920 Summer Olympics show female gymnasts entered the stadium with loose-fitting, short-sleeved dresses and dark loafers.

This dressy ensemble was also worn during a balance beam demonstration, as noted in a rare video clip shared by the Olympics’ official YouTube channel.

“There’s excitement, power and prestige that goes with those leos,” she said.