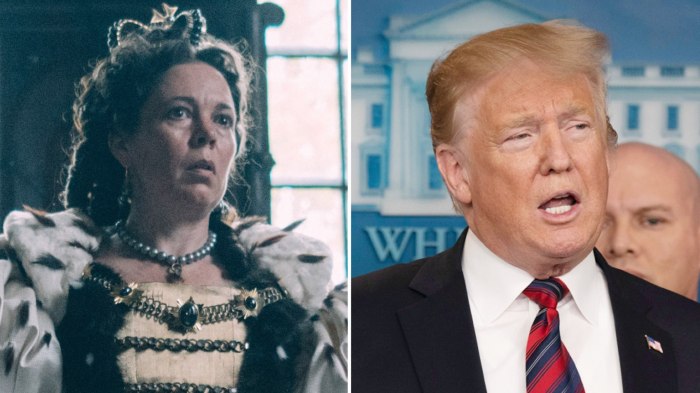 Held at the Palm Springs Convention Center, the star-studded soirée, which kicks off the 11-day fest, was a celebration not only of achievements in cinema and big screen acting, but of the pervasive power in film to not only entertain, but elevate the soul and spirit in times of emotional struggle and searing physic pain. Or, as is the case with America under Trump, times of rampant political tumult and devastating humanitarian crises.

“The Favourite” star Olivia Colman, winner of the Desert Palm Achievement Award, Actress, described her character Queen Anne as “someone in whom resides all the madness, frustration and confusion and instability of a powerful person unfit for a for the job.”

She then raised an eyebrow and cracked, “I don’t know if you know anyone like that.”

It was no surprise that outspoken Pres. Donald Trump critic Jim Carrey got political, if only for a short time while presenting the Vanguard Award to “Green Book” director Peter Farrelly and the cast of the movie.

“Let’s close our eyes and meditate on the year that just past,” Carrey said before closing his eyes and shouting not once, but twice at the top of his lungs. “Thank God it’s 2019. I love the illusion of newness.” Carrey also duly noted that 2019 is the 25th anniversary of Farrelly’s iconic comedy “’Dumb and Dumber,’ a story about two guys who when put in a modern context really don’t seem so dumb.”

Farrelly, for whom “Green Book” marked his inaugural foray into drama, referred to the 1960’s historical crowd-pleaser, which plumbs issues of racism and bigotry, as a vehicle for enacting societal change.

“This movie gives hope,” Farrelly told the crowd. “We’re going through a bad time. People are on opposite ends of the spectrum. All that matters is we talk to each other. This is a movie in which two people drive around [the Deep South] in a car and they find out they’re not that different. We all want the same things in life. We went love, we want happiness, we want to be treated fairly. I want people to see [this movie] because it’s a uniter, and I’ve never had a movie that’s a uniter.”

Farrelly made a point to note that Hollywood took a leap of faith in letting him direct “Green Book,” a film completely outside his usual wheelhouse. “This business is about trust,” he said. “It’s all about trust. That is what people gave me on this movie.”

Earlier in the evening, on the red carpet, “Green Book” star Viggo Mortenson pushed back on family members of Dr. Don Shirley’s who have spoken out against the movie because they say it’s unfair portrait of the late musical prodigy.

Hosted by longtime gala emcee Mary Hart, additional highlights of the gala included  “Bohemian Rhapsody” star Rami Malek, who took home the gala’s Breakthrough Performance Award– ”I’m here because there’s an immigrant man who took it upon himself to push himself in the most extraordinary way,” he said of Queen frontman Freddie Mercury–and Chairman’s Award winner Regina King, featured in Barry Jenkins’ heartbreaking drama “If Beale Street Could Talk.”

“There were things about this film that went beyond my experience,” said Jenkins when presenting the award to King, whom he called “an empath” and credited with providing a much needed “female perspective” to his directorial process. “Regina digs so deep,” he said.

For King, the Palm Springs fest carries with it a nostalgic feel, she told the crowd.

“I was born and bred in LA and Palm Springs is the first vacation I ever took when I was 9 years old. We stayed at the Oasis Resort.” She then added, “It just feels good being Regina King.”

Bradley Cooper, honored with the Director of the Year Award for his remake of “A Star is Born,” recalled the geographical importance of Palm Springs in filming the critically-acclaimed rock star saga. “Jackson Maine was very drunk in this room,” he revealed of the Convention Center. “We shot the pharmaceutical convention scene here. And we jumped onto Stagecoach 8 minutes from here–Willie Nelson was kind enough to let us sing a song.”

Cooper also choked back tears while thanking Sam Elliott, his co-star who presented him with the award.

Also of note: Laura Dern presented Timothée Chalamet with the Spotlight Award, Actor for his portrayal of recovering drug addict Nic Sheff in “Beautiful Boy”; Emily Blunt and her pint-sized child co-stars of “Mary Poppins Returns” were feted with the Ensemble Performance Award; “Can You Ever Forgive Me?” heroine Melissa McCarthy, recipient of the Spotlight Award, Actress, touted “the vibrant and open community that is Palm Springs”; “BlacKkKlansman” filmmaker Spike Lee was honored with the Career Achievement Award; and Alfonso Cuarón fielded the Sonny Bono Visionary Award for “Roma,” a heart rending 1970’s period drama inspired by his own life about middle class life in Cuarón’s native Mexico City.

“A vision in cinema is never singular. It requires the artistry, the imagination, blood, sweat and faith of an entire family of artists,” said Cuaron, who expressed gratitude to the “journalists who championed” his semi-autobiographical Spanish-language, black and white film.

The night’s sole standing ovation went to “The Wife” star Glenn Close, winner of the fest’s Icon Award who sparked laughter in the audience when she admitted that she didn’t know the difference between “what’s an icon and what’s an emoji,” launching into a series of different facial expressions that was, in and of itself, an abbreviate master class in acting demonstrating Close’s formidable theatrical skills even when accepting an award.

“To receive this beautiful award at the beginning of a brand new year, makes me feel like I’m 71 going on 18,” Close cooed. “Or, to be more realistic—35!”