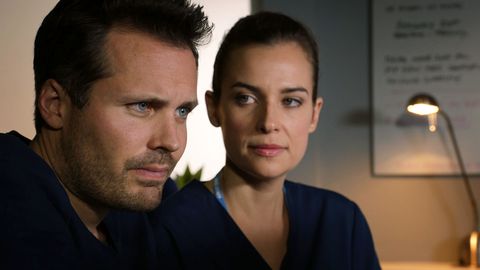 Oliver Valentine (James Anderson) is coming back to Holby City for the show’s final ever Christmas episode.

During the Group Animal episodes back in 2017, Oliver was shot in the head by Henrik’s son, Fredrik.

In the aftermath, Roxanna, Henrik and John Gaskell’s friend, cared for Oliver as the brain-damaged doctor slowly returned to full-health.

Simon Ekrelius – a designer who works behind the scenes on the medical drama – posted a picture on his Instagram of James Anderson and Guy Henry, who plays Henrik Hanssen.

‘It’s been a long journey and the last day for James’, he wrote.

It’s unconfirmed just when Ollie will return but given this Instagram post, could he be back for a while?

Ollie’s arrival to Holby City Hospital will be the third shock return since the show’s cancellation was announced.

Rosie Marcel, who plays Jac Naylor, returned a few months ago, as did Jemma Redgrave, who plays Bernie Wolfe.