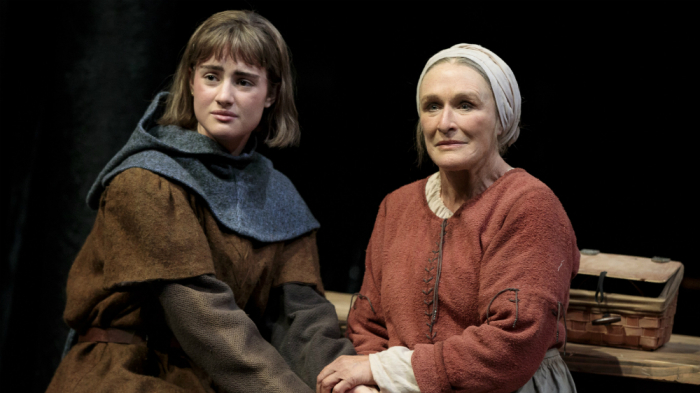 After a disastrous foray into the world of Joan of Arc with the musical “Joan of Arc: Into the Fire,” the Public Theater makes an ill-advised return to the subject with its new production of Jane Anderson’s play “Mother of the Maid” — the story of Joan’s beleaguered mom, fiercely played by the commanding Glenn Close. Focusing on the complex travails of parenting, the play still comes down to women suffering grittily. But it’s a tiresome road to that inevitable outcome.

Here, Isabelle Arc (Close) is sometimes narrating, sometimes living the remarkable discovery that her heretofore unremarkable daughter Joanie (Grace Van Patten) has had a miraculous vision of Saint Catherine and intends to lead an army into battle against the English invaders, with the blessing of the Dauphin of France. Isabelle and her husband Jacques (Dermot Crowley) are simple farmers, devout in their faith in God but struggling to believe their Joan. They’re soon thrust into a larger world of bishops, nobles, celebrity and power, which they can barely grasp and are reticent to trust.

Given the modern vernacular, some moments might feel familiar to parents who see parallels to their own lives with an angry, sullen teen who won’t say much about what she’s feeling, but explodes with outsized rage over any attempts at mothering. But when that teen is Joan of Arc, things quickly shift to the startling, as when Isabelle finds herself checking out her daughter’s new suit of armor or comforting her kid over her break-up with the saint she’s been infatuated with. Parenting never ceases, too: While Joan is locked up in prison, Isabelle finds the time to tell her daughter how to deal with her diarrhea, in one of the play’s more bizarre mothering moments.

Close is no ordinary figure herself. Last seen on stage in New York in the larger-than-life, glamorous role of Norma Desmond in Broadway’s “Sunset Boulevard,” she’s wearing nary a sequin here. In filthy, threadbare period garments, she has the sunburned, scrubbed cheeks and down-to earth look of a woman who has toiled long at the family farm.

But the play makes uncomfortable laughs from this bumpkin routine. Once Joan is ensconced with her powerful patron, the Dauphin, her parents come to court to witness his coronation. Resembling a medieval Ma and Pa Kettle, they marvel at glass stemware and royal bees, and grumble about the impracticality of heating a castle. These salt-of-the-earth folks have been over-salted in broad strokes. (However, Joan’s self-absorbed, mostly useless brother Pierre, played by Andrew Hovelson, amuses from time to time).

In another scene, the play pits the humble Isabelle against a privileged lady of the court (Kate Jennings Grant). Everything this rich woman says inadvertently wounds the provincial, sheltered Isabelle. Suddenly, it’s a class-conscious drama, but the play cannot make up its mind if these class issues are worthy of this seriousness or not.

Nevertheless, this is a play that allows Close to suffer, sacrifice, and fight for her child, and with her child. She does so stoically, dramatically, sternly and completely. She’s a charismatic performer and it’s always a privilege to see her work up close. Meanwhile, Van Patten isn’t given much to do besides be grouchy, arrogant or beatific, with some agonizing mixed in. But the play does not give us much time or space to feel for Joan. We get to know Isabelle better, and her struggles are many. Even so, there’s nothing unexpected in the story or staging. One wishes for a better vehicle for Close’s talent.

Off Broadway Review: 'Mother of the Maid' Starring Glenn Close

Production:
A Public Theater presentation of a play in two acts by Jane Anderson.