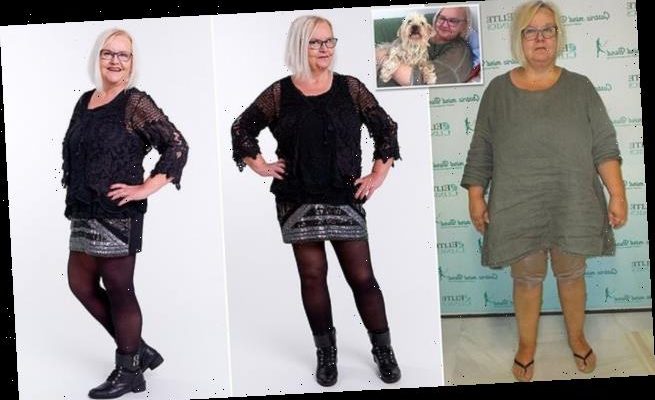 Nurse, 55, who ballooned to almost 16.5st by eating FIVE meals a day drops eight dress sizes after £2,000 ‘mind therapy’ made her believe she’d had a gastric band fitted

Mother-of-one Reija Uski, 55, who lives in Spain, had previously visited British-run Elite clinic in southern Spain for help quitting smoking, which she did after two sessions of hypnosis.

Impressed by how well the technique had worked, she signed up for its gastric mind band therapy, which involved being hypnotised into thinking she had a gastric band fitted in her stomach, in a bid to slim down. 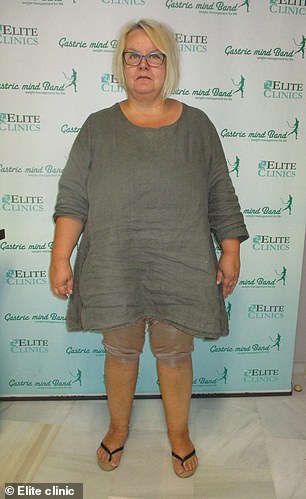 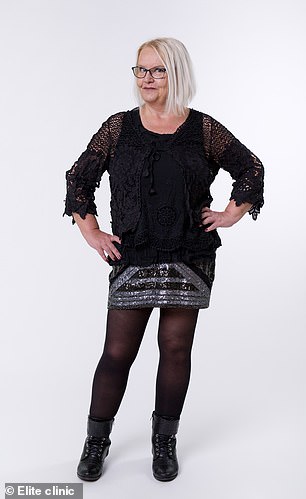 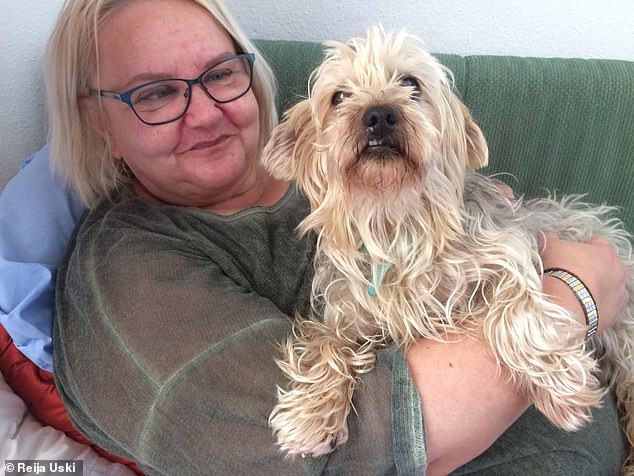 At her heaviest Reija was tucking into bread, pizzas, hamburgers and chocolate as well as chips, nachos, lasagnas, cannelloni and lashings of sauce on everything

Reija steadily put on weight throughout her childhood due to her love of sweets and chocolate, but her size became a real problem in later years when she began to comfort-eat after developing rheumatoid arthritis.

At her heaviest she was tucking into bread, pizzas, hamburgers and chocolate as well as chips, nachos, lasagnas, cannelloni and lashings of sauce on everything.

‘I was just eating and eating all the time. Whenever I was hungry, I ate something unhealthy,’ she told FEMAIL.

‘I was unhappy with my weight and when I was diagnosed with rheumatoid arthritis in 2012 I became very depressed and didn’t go out.

‘I just stayed in my house. I couldn’t bear to go out. I didn’t feel like meeting people. I was tired all the time. 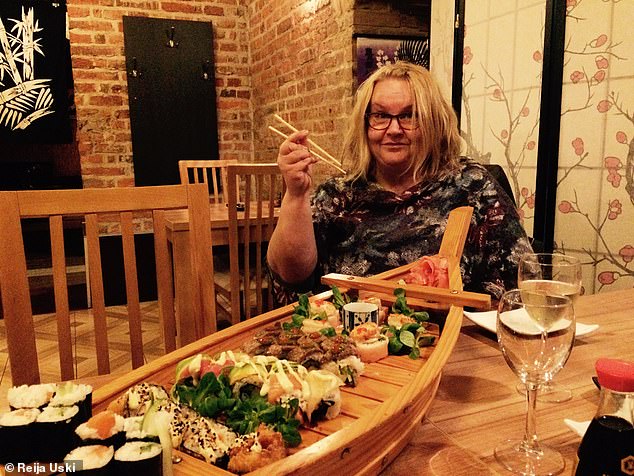 ‘When I was younger, I didn’t really take much notice of my weight, but I knew I was bigger than the other kids. As a child I was chubby. I’d always been eating lots of chocolate and sweets my whole life.

‘I was massively insecure. My parents were very busy and didn’t have lots of time to do things with me, so I did what I wanted and ate what I wanted.

‘I didn’t have the slightest idea what weight I was, but I was obviously very overweight.

‘I never cared about it really because looks are not important to me. When you’re young you don’t think about your health.’

Reija said she tried a couple of different diets but struggled to stick to them because she found them restrictive and time-consuming, having to weight out and measure her portions. 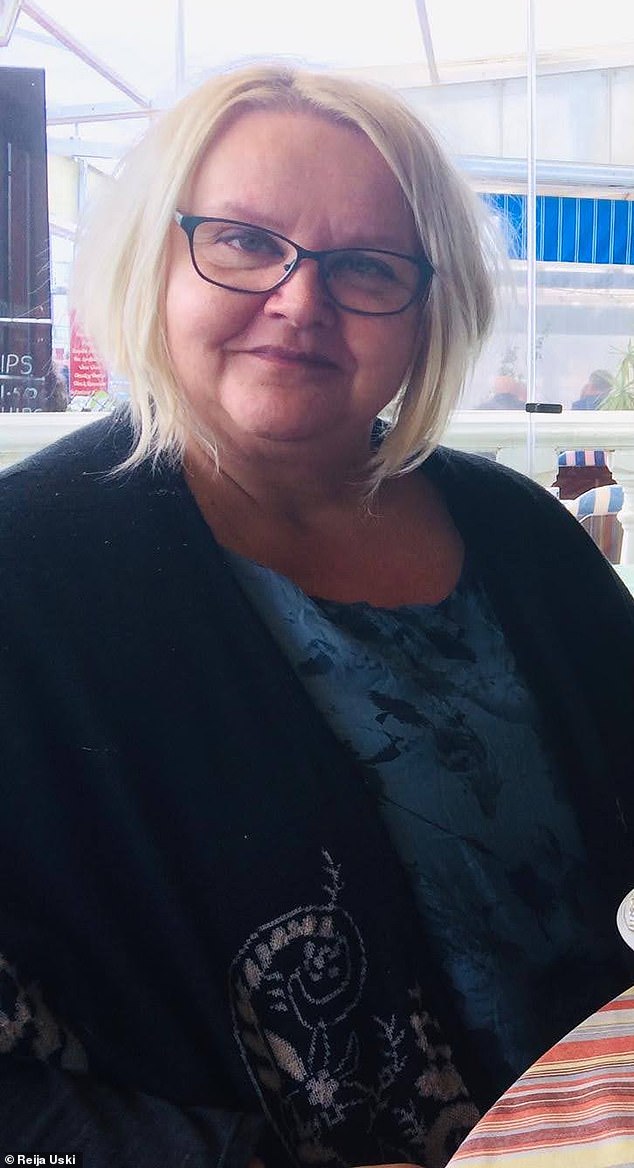 Reija said she tried a couple of different diets but struggled to stick to them because she found them restrictive and time-consuming, having to weight out and measure her portions

‘The gastric mind band therapy is the best thing I have ever done. I only went to give up smoking,’ she said.

‘Now I feel amazing. The first time I saw my daughter after I underwent the therapy she didn’t recognise me. I feel alive now.’

Originally from Kotka, Finland but now living in Fuengirola, Spain, Reija began working as a registered nurse after she left school.

Throwing herself into her job, she finished the working day and returned home to enjoy too many meals and too many unhealthy snacks, unaware she was now up to around 14.5 stones.

The arthritis began to affect her mobility and her mental health and eventually she decided to change jobs and move to southern Spain, hoping the significantly warmer climate would reduce her discomfort. 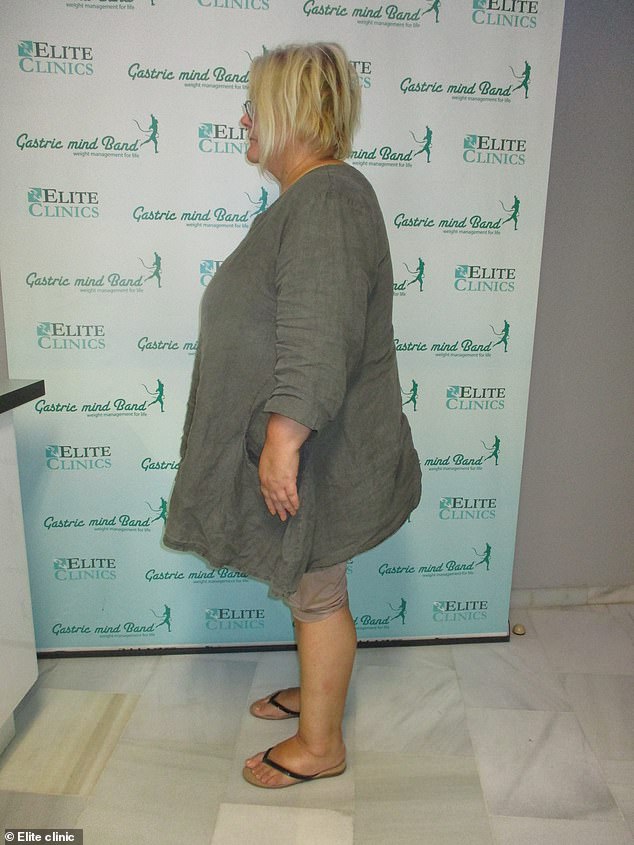 After seeing photos of Elite Clinic patients who had undergone the alternative Cognitive Behavioural Therapy-based Gastric Mind Band Treatment, Reija thought if it worked to stop smoking, she could make it work to lose weight 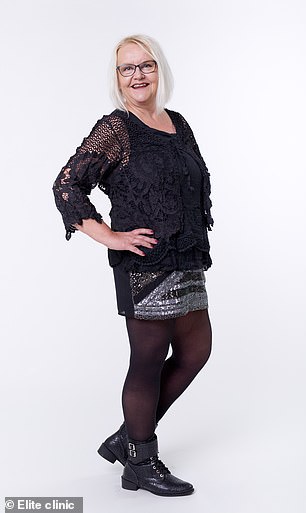 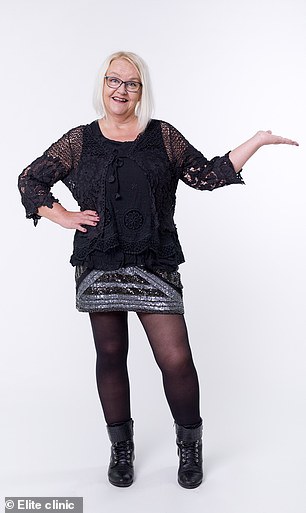 She landed a job working as a occupational nurse for a Finnish company and settled into enjoying the laid-back lifestyle and delicious local cuisine.

Reija recalled: ‘For breakfast I was having white bread with ham, cheese and tomatoes. I would often also much on snacks, chips or nachos.

‘For lunch I would have lasagne, cannelloni or some sort of pasta with sauce. For dinner I never cooked. I would go out and buy more of the same. It wasn’t unusual for me to eat five-meals a day.’

But despite her weight increasing, smoking was the first vice she opted to try to ditch.

After signing up for the hypnotherapy treatment, Reija was able to give up following just two sessions. 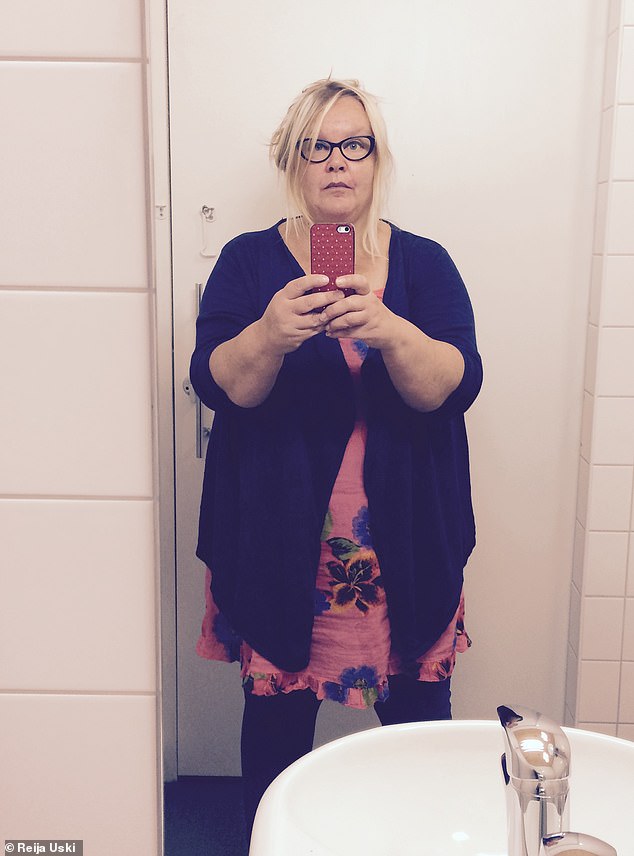 WHAT REIJA ATE BEFORE

Lunch: Lasagne, cannelloni or some sort of pasta with sauce.

Dinner: More of the same, takeaways.

Mid-morning lunch: Chicken, olives and a small portion of cheese

Dinner: Usually more of what she had for lunch, or she’ll mix it up with minced meat with tomato, Greek yoghurt, feta and cucumber.

But as she was leaving the clinic in mid-2019, she spotted photos of patients who had undergone the alternative Cognitive Behavioural Therapy-based Gastric Mind Band Treatment at the Elite Clinic.

She thought if it worked to stop smoking, she could make it work to lose weight.

After four daily intensive CBT sessions, she completed the treatment package by being hypnotised into believing she actually underwent weight loss surgery.

The course began with Reija and British co-founder Marion, a clinical hypnotherapist, running through an in-depth questionnaire covering childhood, background and past relationships to identify Rieja’s ‘triggers’ with food.

She was shown before and after photos of people who’d had Gastric Mind Bands then had deeper introductions to their own registered version of CBT, which is called Pause Button Therapy. 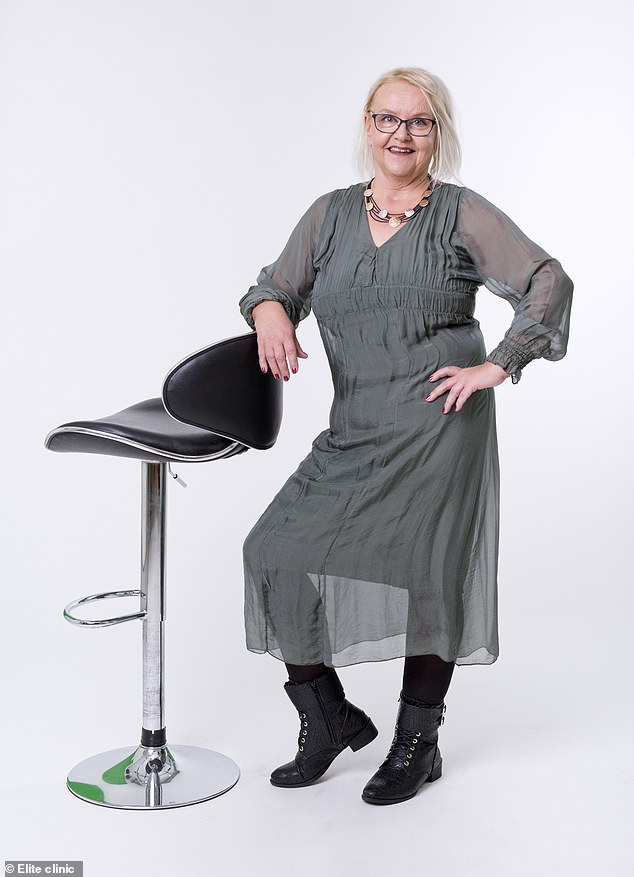 On her wrist Reija now wears a rubber wrist band with remote-control type icons of pause, fast forward and rewind, a technique developed by the Elite Clinic. It reminds her to think, or pause, before she eats something

The behavioural therapy was to help Reija change her habits around food.

The clinic uses various surgical models to explain aspects of the surgical gastric band procedure and Reija was shown a film of an actual operation. They then connected her to a type of heart monitoring machine before she was hypnotised.

Reija said: ‘The things I remember when I was given the gastric band was the smell of a hospital.

HOW THE THERAPY WORKS

CBT is a talking therapy that can help you manage your problems by changing the way you think and behave. It’s most commonly used to treat anxiety and depression but can be useful for other mental and physical health problems.

CBT as a primary method of creating change for those wishing to lose weight has gradually become the ‘core’ therapy, the one around which all the others are woven and underpinned during the gastric mind band treatment.

The Gastric Mind Band is fitted during the fourth and final session.

After an in-depth talk about gastric band surgery, and how it works, patients will see and hold a surgical gastric band, and watch a short video showing one being fitted.

During the visualisation session which follows, patients are then taken on a virtual journey from the hospital ward to the operating theatre, incorporating all the accompanying sights, smells and sounds, culminating in the gastric mind band ‘operation’.

‘I was taken to operating theatre and I also smelled the disinfectant and I heard instruments clanging. Then there was an IV in my hand, and Marion was talking me through it all.

‘She kept saying, “you’re alright, you’re going to be fine”. Then she told me to squeeze the golf ball in my hand, as that is the size of my stomach.’

On her wrist she wears a rubber wrist band with remote-control type icons of pause, fast forward and rewind, a technique developed by the Elite Clinic. It reminds her to think, or pause, before she eats something.

Reija said: ‘It’s to make you think before you eat something, to picture a fork in the road and what will happen if you eat it. For the first time I now think about the consequences of my actions.

‘Now I eat twice a day. No breakfast. I eat at around 10 or 11am. I might have chicken in the oven and maybe olives and small bit of cheese.

‘Then my second meal is at around 7pm. I have the same food I made for my morning meal or maybe a little bit of minced meat with a tomato on it and perhaps a very small bit of Greek yoghurt, feta cheese and a bit of cucumber.’

Co-founder Martin Shirran of www.EliteClinics.com, which has been running courses via Skype and Zoom during the Covid-19 lockdown, said: ‘The results achieved by Reija are amazing; we are so very pleased for her.

‘She is an incredibly determined woman and was a pleasure to have at the clinic.

‘Bearing in mind she only came in to give up the fags, she looks like a completely different woman now. She has been sticking to our plan and she is still losing weight.’