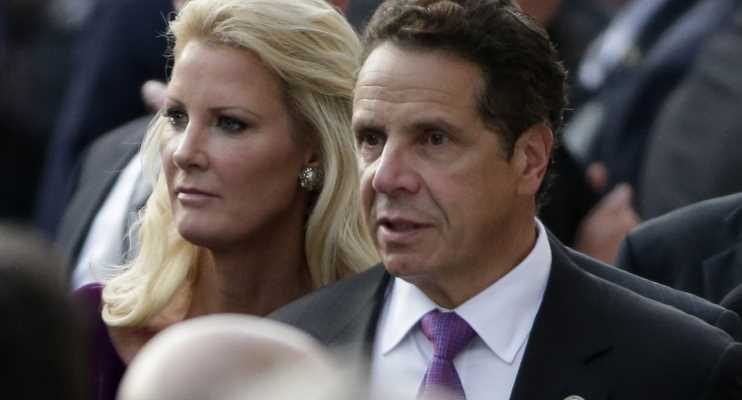 The bill, which Cuomo had been expected to OK, requires New York officials to release tax returns of public officials that have been requested by “congressional tax-related committees” that have cited “specified and legitimate legislative purpose” in seeking them.

“(T)his bill gives Congress the ability to fulfill its Constitutional responsibilities, strengthen our democratic system and ensure that no one is above the law,” Cuomo, a Democrat, said in a statement.

The tax bill, which was passed weeks ago by the Democratically controlled state Legislature, makes it easier for New York to turn over the state tax returns of certain public office-holders, along with entities those people control or have a large stake in, that are requested by the leaders of the three congressional tax-writing committees.

The bill is seen as a clear shot at the president, who has refused to release his tax returns. But it’s been met with resistance from the one Democrat who could actually utilize it.

RELATED: Andrew Cuomo through the years

New York state Governor Andrew Cuomo waves as he arrives to speak on the fourth and final night at the Democratic National Convention in Philadelphia, Pennsylvania, U.S. July 28, 2016. REUTERS/Jim Young

U.S. Vice President Joe Biden appears with New York Governor Andrew Cuomo on the stage at an event to discuss the economy at the Javitz Convention Center in New York, September 10, 2015. REUTERS/Brendan McDermid

New York Governor Andrew Cuomo speaks during a “Raise the Wage” rally in New York May 7, 2015. Governor Cuomo said on Wednesday he would create a so-called Wage Board, a move apparently designed to allow him to raise the minimum wage without the approval of state lawmakers. REUTERS/Brendan McDermid

New York Governor Andrew Cuomo (L) and Archbishop of Havana Cardinal Jaime Ortega shake hands in Havana April 20, 2015. New York Governor Andrew Cuomo met senior Cuban officials in Havana on Monday as the head of a high-powered business delegation looking to take advantage of President Barack Obama’s easing of restrictions with the Communist-led island. Cuomo, a Democrat, is the first governor to visit Cuba since a December announcement by Obama and Cuban President Raul Castro that they would restore diplomatic relations and work to normalize trade and travel ties after more than a half century of hostility and confrontation. REUTERS/Enrique de la Osa

New York Governor Andrew Cuomo stands with his mother Matilda and other members of his family as he watches the casket of his late father, former New York Governor Mario Cuomo, being carried into St. Ignatius Loyola Church for funeral service in the Manhattan borough of New York, January 6, 2015. Mario Cuomo, the three-time governor of New York and a leading voice of the Democratic Party’s liberal wing who turned down several invitations to seek the U.S. presidency, died on January 1 at his home in Manhattan. He was 82. REUTERS/Brendan McDermid (UNITED STATES – Tags: POLITICS OBITUARY)

New York Governor Andrew Cuomo and his partner Sandra Lee depart the wake for slain New York Police Department officer Wenjian Liu in the Brooklyn borough of New York January 3, 2015. Liu, 32, and Rafael Ramos, 40, were shot to death on December 20 as they sat in their squad car in Brooklyn. Their killer, Ismaaiyl Brinsley, who killed himself soon after, had said he was seeking to avenge the deaths this summer of two unarmed black men at the hands of white police officersREUTERS/Carlo Allegri (UNITED STATES – Tags: SOCIETY CIVIL UNREST CRIME LAW)Up Next

House Ways and Means chairman Richard Neal, D-Mass., said he won’t request the state returns because he feels doing so would harm his efforts at obtaining Trump’s federal returns. Just this week, Neal sued the IRS and the Treasury Department for those federal returns.

Meanwhile, Cuomo could act soon on another bill that is aimed at Trump

That legislation would allow state prosecutors to pursue charges against certain people even if they had received a presidential pardon. Trump has spoken about the possibility of pardoning those accused or convicted of crimes stemming from former special counsel Robert Mueller’s investigation.

The 10 Most Overlooked Tax Deductions

Don't overpay taxes by overlooking these tax deductions. See the 10 most common deductions taxpayers miss on their tax returns so you can keep more money in your pocket.

How to Find a Good CPA for Your Taxes

Finding a good CPA for your taxes is simple with these seven tips: 1. Ask about their specialization; 2. Verify their identification number, 3. Look up their license, 4. Consider their experience, 5. Confirm their willingness to sign, 6. Ask for advice, and 7. Determine their fees.

2018 Tax Reform Impact: What You Should Know

Congress has passed the largest piece of tax reform legislation in more than three decades. The bill went into place on January 1, 2018, which means that it will affect the taxes of most taxpayers for the 2018 tax year.