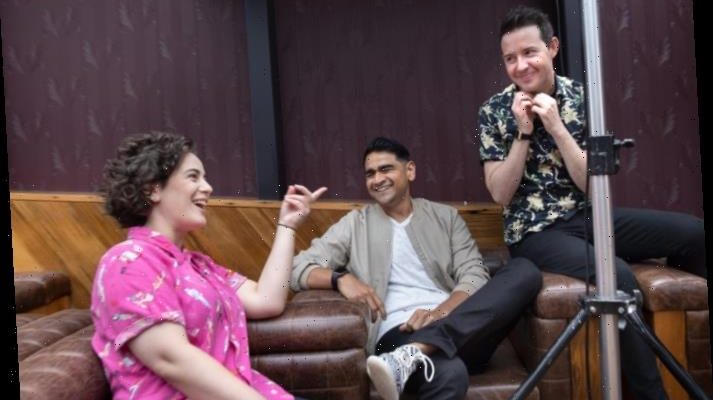 With the launch of the Melbourne International Comedy Festival, “Zoom is over for the next month, thank God”, declared stand-up Nath Valvo.

No more do comedians have to make do with online, video-conferenced corporate gigs for stony-faced accountants, an experience Valvo will not miss.

“During the Zoom this lady’s cat came and sat on her lap … and the cat fell asleep. That’s a new level of heckle.” 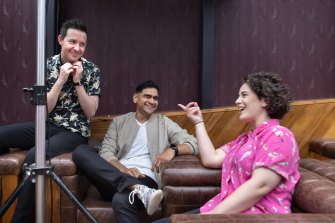 Did you hear the one about comedians actually getting a festival? Nath Valvo, Dilruk Jayasinha and Jude Perl enjoy the launch.Credit:Simon Schluter

And it will play a big role in the city’s economic recovery – just when the end of the JobKeeper subsidy puts some businesses on the precipice.

“This has so many benefits about building up COVID confidence, attracting people back into the city,” Capp said. “It’s up to all of us to make our best efforts now to turn up to every single one of those performances, have a great time and take that positivity out into the streets of Melbourne.”

Valvo said it would be a relief for audiences, too.

“The comedy festival is going to be a very exciting time for couples … you get an hour off talking to each other. And I feel after the last year, that is a community service.”

But this will be a festival with a difference.

For a start, said director Susan Provan, the “international” element will be much smaller than usual, comprising some online material from overseas plus a few acts, like Arj Barker and Ross Noble, who have been here since the pandemic began.

“It’s actually lovely to have a festival that is dominated by Australian artists,” Provan said. “Australians have always been the much-loved superstars of our festival, but I think with a slightly smaller festival and all-Australian it’s given it a particular buzz.

“Friends of mine are putting special effort into seeing people they haven’t heard of. In the community there’s strong sense that comedians and all artists have had a very hard year and they want to get out and support them.”

Provan said they were thrilled to have booked more than 300 acts – with more popping up even with the festival about to begin, as confidence continues to grow after initial uncertainty over border closures.

2020 demonstrated very clearly how vulnerable the creative sector and its workers are, Provan said.

“[They] suddenly had the rug pulled out from under them, many of them did not qualify for JobKeeper, many lives were turned upside down and it’s so amazing to see them all back.

“It showed us that there’s still a lot of work that needs to be done regarding how we grow and support our ever-evolving, hugely valuable creative industries [and] the actual humans at the heart of that work.”

She credits the state government with saving the festival, and doesn’t begrudge continuing restrictions. Some venues have won exemptions to lift their capacity above mandated “COVID normal” caps but most will be at 75 per cent, Provan said. All official festival venues will mandate face masks if people are not drinking, and there will be QR codes and hand sanitiser everywhere.

“Our focus is very much on people feeling comfortable. Some may be a little tentative about throwing themselves into a crowded situation so we would rather err on the side of caution and add extra shows if necessary rather than crowd people in.”

Comedian Zoe Coombs Marr said it was fantastic to be back with live audiences. Despite the masks, the changes to venues, and the nerves, there was a magic in the “back and forth” that she had missed in a year of online and TV work.

“But I’m nervous, everyone is so out of practice,” she said. “Audiences will be as well … We’re all just slightly slow on our cues. We’re all just sort of … working it out.”