A few years ago, Pete Townshend started walking around the extremely well-heeled riverside borough of Richmond in London, where he has lived for 30 years, taking the temperature of the times as a project began to take shape in his mind. He realised, he says, that he didn’t know much about his neighbours.

‘‘I didn’t know what they were feeling. But as I started to open up as an artist, as a writer, as a musician – as someone hoping to write music that evoked, reflected and drew on what the people in my neighbourhood were thinking and feeling, it was clear that what needed celebrating wasn’t the sunny days by the River Thames, the lovely restaurants, the good schools, the four-wheel drives. What needed celebrating was what was in people’s heads, which was abject terror.’’ 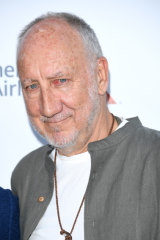 Pete Townshend decided that ‘‘if I could do it, then I should.”Credit:Getty Images

Townshend has now written a novel. As one might expect from a rock legend – for this Townshend is, indeed, the ideas man, songwriter and guitar-smasher for The Who, who memorably hoped to die before he got old – The Age of Anxiety is a story about a young musician narrated by his godfather Louis, who happens to be approximately Townshend’s age when he began work on it and an ex-junkie, although Townshend has given him someone else’s job: he is a dealer in ‘‘outsider’’ art.

His godson, Walter, is the frontman for a straight-up pub rock band who is tormented by a burgeoning sense that he is becoming the conduit for his audiences’ fears and visions; the mosh pit is literally driving him mad. In this he shares something with Louis’ most lucrative client, a former rock star called Old Nick who once saw a band of angels filling the sky in the Lake District and has been painting them ever since. Nick tells Walter to wait. His true art will come to him.

A good deal happens – Townshend muses that he may be guilty of over-plotting – most of which involves gorgeous redheaded women who compete viciously for Walter’s attention. Everyone is, becomes or acts as if they are hugely and carelessly rich; even Serena, who has visions of angels and is described as a psychic healer, can afford lunch at Le Caprice. Walter ditches one beauteous wife to marry an equally stunning, eager and considerably younger woman who likes horses at the same time as he withdraws from the rock world.

Instead, he takes up horticulture, devoting himself for 15 years to building a maze in his garden while his wife goes back and forth to horse trials. Louis does not desert him, however, helping him finally to find a way through his spectral confusion to make his magnum opus: a vast construction of apocalyptic soundscapes that is ultimately presented in Hyde Park.

In an Escher-like twist, this novel is, in turn, the companion piece – or possibly program notes – for just such a work, which Townshend has conceptualised as soundscapes like those in the book. The fiction becomes fact; the fact is the fiction. This combined work is a huge project, yet to come to full fruition, although he says the music is written and ready to go. Townshend began both book and performance piece – which seems to be a second-generation rock opera, a quantum leap from Tommy and Quadrophenia – when he was 68. He is now 74. What spurred him on?

‘‘I think mainly the feeling that probably I could do it and if I could do it, then I should,’’ he says. ‘‘It’s a bit like someone of my age deciding to run the marathon.’’

In The Age of Anxiety, Walter’s ideas are scored by his father, a classical organist; in real life, Townshend briefed composer and organist James Morgan to write the soundscapes involving tidal waves, storms and tumbling buildings. ‘‘I tried to do them myself first, with a mixture of electronic music and orchestral composing,’’ he says. ‘‘I did quite well but then I thought, ‘Hold on, what I really want is that … this piece live on.' I want it to be something that is performed as a piece of music and therefore it needs to be orchestrated. He’s made the brief happen. What he’s done is sensational, scary, frightening and wonderful.’’ 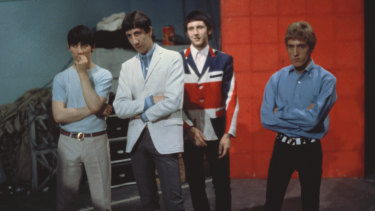 From left, Keith Moon, Pete Townshend, John Entwhistle and Roger Daltrey of The Who in 1965.Credit:Getty Images

Townshend thinks of himself primarily as a writer. Fifty years on, he says he was bullied by Roger Daltrey into starting The Who and bullied back into it in 2002. ‘‘Although I don’t regret it, it does make me feel less of a man, less of an artist, to just kind of think, ‘Oh well, I’ll go back and do the old shit because it pays well,’ ’’ he says. They are touring now with an orchestra, but he says that has actually been interesting: tricky in a good way. ‘‘But for me, the electric guitar gets in my way, you know. Yagadang, yagadang, it’s all anyone wants me to do.’’

Even in the earliest days of The Who, he recognised that their audience consisted largely of lost, uncertain boys. He felt then – and still feels – that the show belongs to the audience. ‘‘I was not their mouthpiece, but I could actually give them a way to express themselves. So the first three or four Who songs and my subsequent big projects were presented as, ‘Here it is; do what you like with it.’ But if I don’t enjoy going on stage – and I don’t – what is it I enjoy about this? I enjoy writing songs because that craft is not automatically landed in cliche.’’

The Age of Anxiety, by contrast, he wrote for himself. ‘‘In this case I thought, ‘It’s too late, I’m pushing 70, I haven’t got time to work out even who the audience is.’ ’’ The characters are all worked up from people he knows. Old Nick, for example, is based on one of John Lennon’s teachers at art college who really did claim to have seen a band of angels while he was driving home and spent the rest of his life painting them. Crow, the band’s pub rock purist, is a version of Keith Richards. Which one is he? ‘‘That’s one of the problems, isn’t it? Being a face, being a celebrity. People will be looking for you. I don’t necessarily feel that I’m in any of them. What is clear is that they all speak with my voice.’’

It was harder, he says, to find real-life templates for his female characters. His first wife is a teacher; his wife Rachel orchestrates music. They didn’t fit. ‘‘So I started to look, not at groupies, but some girlfriends I’d had in days when I was free or made myself free, women I admired or for various reasons, was perhaps intimidated by or amused by and created these female characters, to the point now where I’m kind of in love with all of them. It’s a very weird feeling.’’

His favourite is the ghost-luster Selena, who stabbed her father to death and believes she is manipulating those around her with curses and mind-controlling demands; she’s pure manic pixie dream girl, but with extra mania. ‘‘She’s the maddest,’’ Townshend says. ‘‘I love the fact that Selena makes stuff up and gets away with it. If there is anybody in there I’d like to f—, it’s definitely Selena.’’

Then there are the terrors, so many of them, making all the characters feel unsafe. What frightens Townshend most is that society is so raucously and increasingly polarised by extreme points of view. Close to home, the Iraqi man who runs his local milk bar laments that his imam has ruled that the faithful can’t listen to rock music. Out in the world, we are besieged by fake news in the guise of information, leading to a snark war. The book can’t be about all these things, of course, but he does try to shoehorn them in.

Inevitably, it is also about the world he has inhabited from Woodstock through Glastonbury, of music and extremes of another kind. ‘‘I just wanted to start this book with anything goes, you know, but also then to really look at what happens, having lived through some very dark times.’’ He gives Louis his heroin addiction, another character his brief but virulent cocaine habit; we discuss alcohol, the false friend of creativity.

‘‘One interviewer asked me what was the difference between Woodstock and Glastonbury and I thought well, when you think about Woodstock, everybody’s gone. Not dead, just gone.’’ Creativity and madness do go in lockstep, he believes. Art dances with death.

‘‘So I can only speak for myself when I say I think I’m happier now than I’ve ever been. And probably because I’m running out of time, nothing matters any more.’’ He checked his passport recently and found it will last until he’s 87. He gives a dry laugh. ‘‘And I’m looking at this little brown thing thinking: will I win, or will you?’’

The Age of Anxiety is published by Hachette Australia in bookshops and online on November 5, $32.99.