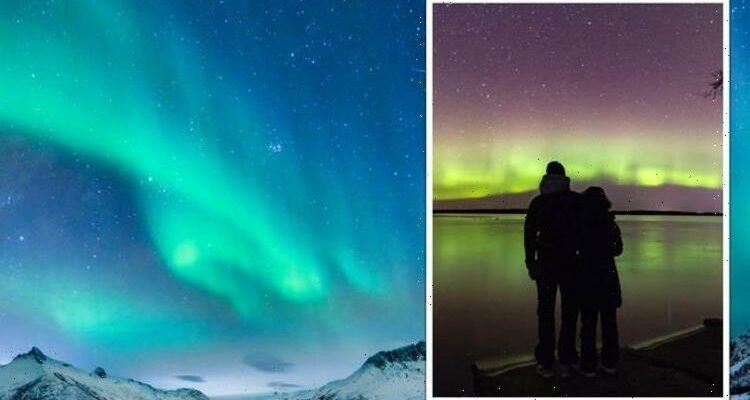 It has been predicted that tonight some lucky Britons might be able to watch the Northern Lights illuminate the night sky. AuroraWatchUK has predicted ‘minor geomagnetic activity’, meaning there’s a chance for some northern spots in the UK to glimpse the aurora borealis. Are you one of the lucky ones who might be able to spot the lights? Find out where and when in the UK you can see aurora borealis tonight.

The aurora borealis, also known as the northern lights, may be visible from some parts of the UK tonight.

Watching the beautiful green and purple lights dance across the night sky is touted as one of the natural wonders of the world, and seeing them is at the top of many people’s bucket lists.

Some people choose to go on holiday to Iceland and other countries in the Arctic Circle for the best chance of seeing aurora borealis, but tonight they may be visible from parts of the UK.

Alex Beresford, ITV weather presenter, tweeted: “There’s a chance to see the aurora tonight, more so in the north.

“Lots of solar activity and a release of plasma from the sun is set to collide with earth’s atmosphere amounting in this beautiful light display.

“Spoiler – could be cloudy but fingers crossed.”

The website AuroraWatch UK, run by scientists at Lancaster University’s Department of Physics, uses magnetometers to predict when aurora borealis might be visible from the UK.

Aurora borealis is most visible tonight between 9pm and 11pm, it revealed.

The Scottish highlands should have the best view of any aurora borealis that are strong enough to be seen from the UK.

That being said, they have been spotted from as far south as Kent in the past.

Staying away from any light pollution, like big cities and motorways, can increase your chances of being able to see the aurora borealis.

However, as Alex Beresford pointed out, it could be a little cloudy tonight for a sighting.

If you can’t see the Northern Lights with your eyes, sometimes sophisticated digital cameras can pick them up.

What causes the aurora borealis?

The aurora borealis, also known as the northern lights, is often described as one of the most beautiful sights on the planet – but what is it?

The Northern Lights cause great mists of colourful greens, pinks, purples and blues to flicker across the sky.

The aurora borealis is caused by solar storms on the surface of the Sun.

The solar storms cause a number of electrically charged particles to be released into space, and these particles are attracted to the poles of the Earth, which is why the northern lights are commonly seen in the north pole.

The same phenomenon takes place in the south pole too, but the southern hemisphere’s version is called aurora australis.

The particles from the Sun collide with gases from the Earth’s atmosphere, causing the magical-looking blue and green lights in our sky.