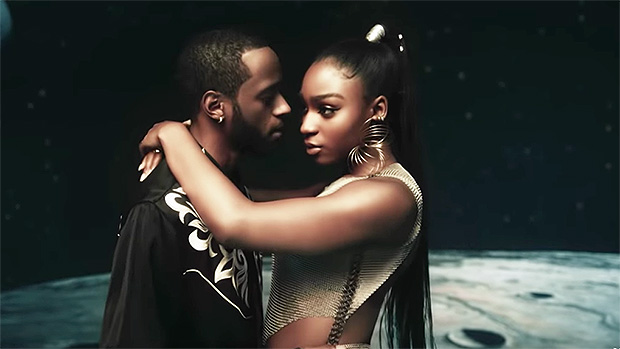 Normani & 6lack are taking us to the moon! The two musicians just dropped their sensual visual for ‘Waves’ & it’s a must-watch.

Normani, 22, & 6lack, 26, have once again proven to be one dynamic duo! Following the release of their song, “Waves,” the two filmed a video for the song as well, and it’s out of this world. In the clip, Normani stuns in a slinky, sheer dress, before then switching it up and donning a tight black coset, as she dances in a starry, galactic world. 6lack joins her, and they slay in the dreamy visual from start to finish!

“Waves” was first released on Nov 15, and fans instantly related to the powerful lyrics. The track details the universally relatable experience of an on-again, off-again relationship. “First I blame you, then I want you//Fu**ing hate you, then I love you//I can’t help myself, no//When I have you, wanna leave you//If you go, that’s when I need you//I can’t help myself, no,” Normani heartachingly sings on the track. By the end of the track, 6lack dives in with a verse of his own as well.

Normani just keeps the hits coming, and she’s also climbing the charts thanks to “Dancing With A Stranger,” her ballad with Sam Smith. The video for the joint track dropped on Jan. 29, and the former Fifth Harmony stunned in the visual. She showed off her flawless footwork in a series of dances moves, putting her toned figure on display in a tight black corset. The moody clip of course featured Sam as well. who brooded inside his house with post-breakup feels. Now, with yet another video under her belt, Normani has proven to be unstoppable. Watch her latest clip above!