Shortly before 9:00pm, Nicki Minaj tore up the stage before receiving the coveted Michael Jackson Video Vanguard Award at the 2022 MTV VMAs.

Donned in an all-pink ensemble, Minaj opened her medley with the song “Roman’s Revenge,” spitting lyrics such as “I am not Jasmine, I am Aladdin; So far ahead these bums is laggin’,” as the crowd recited her every word. She followed this with her legendary “Monster” verse from Kanye West’s My Beautiful Dark Twisted Fantasy. 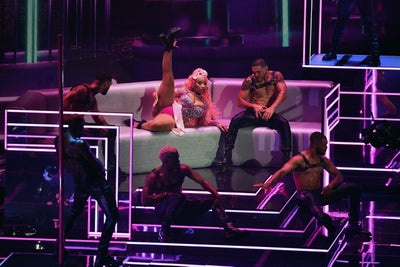 After quick snippets of “Beez in the Trap” and “Chun Li,” the Queens native strutted over to the big stage for an earth-shattering performance of “Moment 4 Life.” Accompanied by a group of talented background dancers, Minaj recited her amazing first before beautifully singing the chorus to an excited crowd.

The award-winning musician closed out her set with “Super Freaky Girl,” her brand new single that just reached No.1 on the Billboard 100, putting her in a rare group of female artists. Before being presented with the Video Vanguard Award by a group of her biggest fans, MTV aired a montage of videos from supporters all over the world, expressing gratitude and admiration for Minaj, with one person saying, “You’re the reason I’m alive,” in regard to Nicki’s impact. 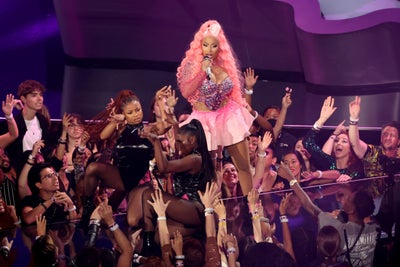 Upon receiving her award, Minaj thanked the people that inspired her, which included Lil Wayne, Foxy Brown, and Slick Rick, then shouted out Kanye West, Madonna, Mariah Carey, Britney Spears, Rihanna and Beanie Man for giving her opportunities in music. She ended her speech by giving love to her label, and fallen musicians such as Michael Jackson, Whitney Houston, Nipsey Hussle, and Pop Smoke. The critically-acclaimed lyricist spoke emotionally about her child, before thanking MTV, the crowd, and last but not least – the Barbs. 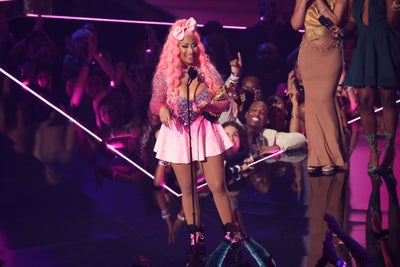