One September evening in 1994, Nicholas Heyward Jr., 13, was playing cops and robbers with friends on a rooftop at the Gowanus Houses, the Brooklyn housing project where he lived. The boys, carrying toy guns, decided to go back inside and rushed down the stairs, jostling one another.

At the same time, Brian George, a 23-year-old police officer on patrol, was responding to a report of a man with a gun and possibly shots having been fired at the project. Housing police said that people had sometimes fired actual firearms for “target practice” on the roofs.

Officer George went to the building where the boys were and was heading to the staircase when he encountered the boys. Nicholas was holding an 18-inch toy rifle.

“We’re playing,” Nicholas told the officer, according to his friends.

But in seconds Officer George shot him in the stomach with his .38-caliber service revolver.

Nicholas was taken to a Manhattan hospital, where he died hours later. One of Nicholas’s friends said that Officer George, who, like Nicholas, was African-American, left the scene in tears.

And it set Nicholas’s father, Nicholas Heyward Sr., on a quest for justice for his son. Long before Akai Gurley, Tamir Rice, Eric Garner and many other young black men would be killed in encounters with police officers, sparking protests and leading to the creation of the Black Lives Matter movement, Mr. Heyward had been an activist against police brutality and a comfort to the loved ones of people killed by police officers.

He died on Dec. 31 at 61. His family members and a foundation named after his son announced his death without providing further details. 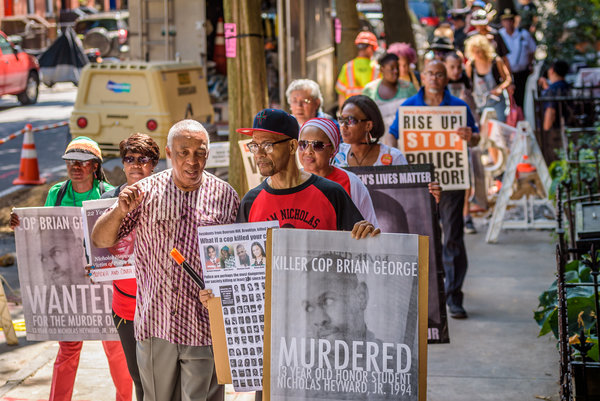 Mr. Heyward argued publicly for toy stores to stop carrying authentic-looking toy guns, or toy guns that could be made to appear realistic.

“I speak in schools, churches, wherever they’ll have me,” Mr. Heyward told The Daily News in New York in 1998. “Kids shouldn’t be playing with those things, but cops also have to realize that if they come out pointing real guns, a kid will go into a kind of shock and maybe not drop the toy gun.”

In December 1994, the Brooklyn district attorney, Charles J. Hynes, cited Nicholas’s realistic-looking toy rifle as his rationale for declining to press charges against Officer George. Mr. Hynes said an investigation had made it “abundantly clear that the circumstances leading to the tragic death of this 13-year-old were not the fault of Police Officer Brian George, but rather the result of a proliferation of imitation toy guns.”

Mr. Heyward expressed what has become a refrain by the families of people killed by police officers when those officers are not subsequently tried or convicted of a crime.

“It’s amazing the way things operate in this city, the way they allow the officers to come into the project, do what they want, even kill a child and then protect the officer,” he told Newsday after Mr. Hynes’s decision.

Mr. Heyward helped convene an annual march against police brutality in New York as one of the first members of the October 22 Coalition, a group that has documented and protested police killings nationally. He held training sessions to teach young black people their legal rights. He also supported the grieving relatives of people who were killed by the police.

In 1997, Mr. Heyward testified before several congressional representatives at Medgar Evers College in the Crown Heights section of Brooklyn after Abner Louima, a Haitian immigrant, was brutalized in a precinct house in one of the most notorious incidents of police abuse in New York in recent memory.

Mr. Heyward and Nicholas’s mother, Angela Heyward, refused to let his memory fade away. They helped establish the Nicholas Naquan Heyward Jr. Memorial Foundation to help youths in Brooklyn, and arranged an annual day of remembrance for Nicholas at the Gowanus Houses playground. The Parks Department renamed the playground the Nicholas Naquan Heyward Jr. Park in 2001, after Mr. Heyward spent years lobbying for the change.

A memorial to those who lost their lives in 2018

The next year, Mr. Heyward told The Daily News that he thought police officers had to be held accountable for their actions, and had to change their mind-set, before episodes like his son’s death would stop.

“It’s too simplistic to say it’s just a race thing,” he said. “My son was shot by an African-American officer born and reared inside Brooklyn. It’s more of the police mentality thing. They need to face some sort of consequences.”

Mr. Heyward repeatedly sought prosecution in his son’s killing and eventually settled a civil charge with the city, but he expressed dismay that Officer George had never faced any consequences.

Officer George, who has retired, could not be reached for comment. He told The New York Post in 2004 that he “could understand the loss of the family — that’s the biggest struggle.” He said he was haunted by the shooting.

“You ask yourself, ‘Why, why, why?,’ ” Officer George was quoted as saying. “You say to yourself: ‘I was just doing the right thing, I was doing my job’ . . . then politics gets involved, and all of a sudden you’re demonized.”

Mr. Heyward told Newsday that he ran into Officer George on the street in Brooklyn in 1995, not even a year after Nicholas’s death.

“I said: ‘You killed my son and you’re back down in the projects? How could you want to be here? Never once did you openly apologize or show any remorse to me, my wife or my family.’ ”

Officer George did not respond, he said, and Mr. Heyward walked away.

Mr. Heyward was born on June 24, 1957. His marriage to Angela ended in divorce. His survivors include his wife, Donna Heyward, and a son, Quentin.

In 2015, he told Story Corps, a nonprofit organization that records and shares stories by Americans of diverse backgrounds, that time had not assuaged the pain of losing his son.

“It’s been 20 long years, and the pain has actually gotten deeper for me,” he said. “I wonder what it’d be like to have a son 33 years old. I would give my life today if I could just have him back.”