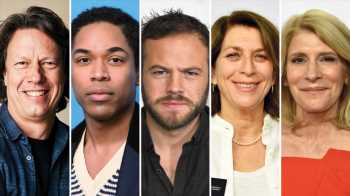 The Newport Beach Film Festival, which kicks off April 24 and continues through April 27, will honor five talented artists who will be on hand to accept their awards. The event kicks off opening night with the West Coast premiere of Sundance indie hit “Luce,” a provocative racial drama from director Julius Onah starring Naomi Watts, Octavia Spencer, Tim Roth and rising star Kelvin Harrison Jr. The fest closes with the world premiere of “Part of Water,” a documentary about local lifeguard hero Ben Carlson who lost his life saving a drowning swimmer in 2014.

The fest and Vans will host a Saturday night Spotlight Celebration at Via Lido Plaza alongside culinary tastings from local restaurants. This event complements culinary-themed films, which include “Funke,” about chef Evan Funke; “The Biggest Little Farm”; “Chef’s Diaries: Scotland”; and “Virgin & Extra: The Land of Olive Oil.”

The Irish Showcase premieres three highly anticipated Irish films — “Metal Heart,” “The Belly of the Whale” and “Rosie” — followed by a reception. The world premiere of “Pick It Up! — Ska in the ’90s,” featuring members of bands like No Doubt, Reel Big Fish, the Mighty Mighty Bosstones, Fishbone and the Specials, takes place on April 26, the evening before the popular Back to the Beach music festival in Huntington Beach, creating a weekend celebration of cinema and music in Orange County.

The five NBFF honorees are:

Gavin Hood – Artist of Distinction
The South African filmmaker is a director, screenwriter, producer and actor probably best known for writing and helming 2005’s “Tsotsi,” which won the Academy Award for foreign-language film. Based on the novel of the same name by Athol Fugard, it tells the story of a young street hoodlum in a Johannesburg slum. Hood began his career making educational shorts, and then wrote, produced and directed 1998 short “The Storekeeper,” before making his feature film debut in 1999 with “A Reasonable Man.” Since then, Hood’s oeuvre includes such films as political thriller “Rendition,” “X-Men Origins: Wolverine,” “Ender’s Game,” “Eye in the Sky” and his latest film, “Official Secrets,” another thriller.

Kelvin Harrison Jr. – Rising Star Award
The New Orleans native has already amassed an impressive resume in the few short years since he began acting. He made his feature debut in 2013, playing bit parts in “12 Years a Slave” and “Ender’s Game,” then appeared in such films as Sundance winner “The Birth of a Nation,” “Mudbound,” “It Comes at Night,” “Jinn” and “Monster.” Harrison stars in the new racial drama “Luce,” and his next role will be on Epix series “The Godfather of Harlem,” a prequel to the 2007 Ridley Scott movie “American Gangster.” Other TV work includes the 2016 reboot of “Roots” and “Underground.” Harrison is also a musician on piano and trumpet, and recorded with the Marsalis family.

Moe Dunford – Breakthrough Award
The Irish actor has emerged as one of his country’s busiest talents, with three new films premiering at Newport Beach: “Rosie,” directed by Paddy Breathnach and written by award-winning Irish novelist Roddy Doyle; “Metal Heart,” directed by Hugh O’Conor; and “The Belly of the Whale,” directed by Morgan Bushe. Dunford began his career in 2010 with a small role in “The Tudors,” then appeared in “Game of Thrones” and other series before landing a lead role in “Vikings.” He made his film debut in 2014’s “Patrick’s Day,” which got him a Shooting Stars Award at the Berlin Film Festival and lead actor prize at IFTA. Other films include “Black ’47,” “Michael Inside” and “The Dig.”

Maryann Brandon – Icon Award
The editor began her career in New York and worked on such films as “The Cotton Club” and “A Chorus Line” before relocating to L.A. and teaming with writer-producer J.J. Abrams for his TV series “Alias.” Thus began a collaboration that has spanned almost 20 years. Brandon has since edited all of Abrams’ features: “Mission: Impossible III,” “Super 8,” “Star Trek,” “Star Trek Into Darkness,” and “Star Wars: The Force Awakens,” for which she earned an Oscar nomination. Other credits include “The Jane Austen Book Club,” “How to Train Your Dragon,” “Endless Love” and “The Darkest Minds.” She is at work on “Star Wars: The Rise of Skywalker” with Abrams, due in theaters this Christmas.

Mary Jo Markey – Icon Award
Editor Markey began her career as an apprentice to Dede Allen on Robert Redford’s “The Milagro Beanfield War.” After cutting indies and TV movies, she started with J.J. Abrams on TV series “Felicity,” then edited two seasons of “Alias,” receiving her first Emmy nom, and won the Emmy for the “Lost” pilot. She teamed with fellow Icon Award honoree Maryann Brandon to cut Abrams’ “Mission: Impossible III,” and together they’ve since edited all his films. Her work with Abrams continued with HBO pilot “Anatomy of Hope,” “Star Trek,” the “Undercovers” pilot, “Super 8,” and “Star Trek into Darkness.” For “Star Wars: The Force Awakens” she received an Oscar nom and another ACE Eddie nod.