Engaged couples are forced to postpone their weddings due to social distancing measures.

A newly married couple found a way to convey this fact with a gag invoice they shared with family and friends on social media, but they didn’t realize their post would go viral and highlight a larger RSVP issue.

Douglas and Dedra Simmons of Chicago, Illinois, got married at the Royalton Negril Resort & Spa in Jamaica earlier this month.

They began planning their big day in Nov. 2020 and reached out to their guests on four separate occasions to confirm the final headcount, Douglas Simmons told FOX News. 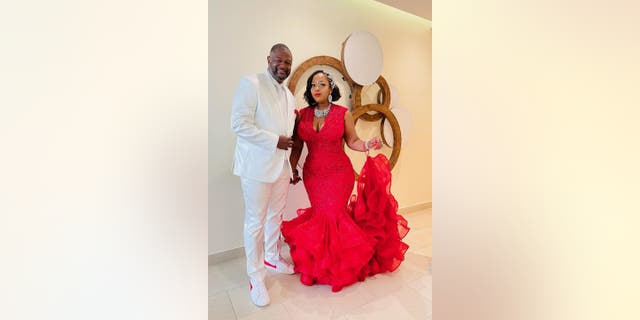 Douglas and Dedra Simmons got married at the Royalton Negril Resort &amp; Spa in Jamaica on Aug. 18, 2021.
(Nicky Watkins)

Simmons said four guests and their plus-ones were no-call, no-shows although they agreed they would be in attendance each time.

The Simmons saw an opportunity where they could vent out their frustrations and teach a lesson about RSVP etiquette with a mock invoice.

Simmons said he and Dedra shared the invoice on Facebook five days after their wedding, which was held on Aug. 18, 2021.

“Don’t be offended when I send this #invoice to you,” he captioned the post. “I’m sending it via email and regular mail.” 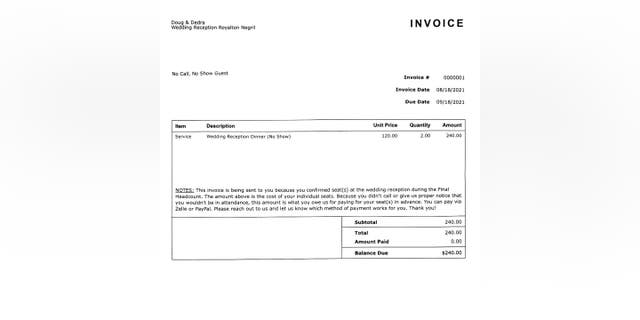 According to Douglas Simmons, eight guests who confirmed their attendance skipped out on the destination wedding without notice. This inspired him and his wife to create a "no-call, no-show" invoice that demonstrates the cost of two reception dinners.
(Douglas Simmons)

A reception meal for two cost Simmons and his wife $240, which included appetizers, entrees and a premium bar.

“Everyone tells the bride and groom to just eat the cost and don’t worry about it. Why is that OK?” Simmons said in an interview with FOX News.

He also questioned why potential critics might find it “tacky or classless” to share a joke invoice rather than a no-call, no-show.

“It’s about integrity and being considerate,” Simmons explained. “In my opinion, it’s time for people to hold others accountable”

While the invoice included a due date and payment methods, Simmons clarified that he and his wife aren’t actually seeking money from the guests who failed to show up.

Some of their guests have apologized for not notifying the couple ahead of time and have even offered to pay, but Simmons said he and Dedra haven’t taken them up on those offers. 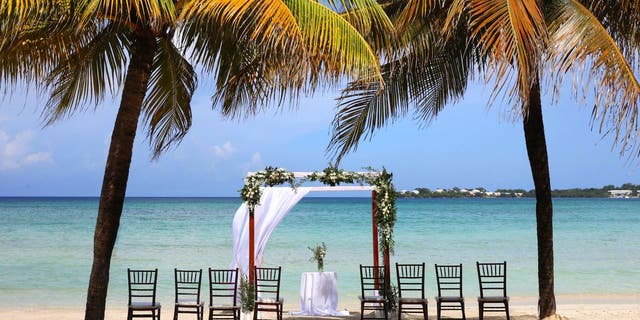 “It wasn’t about the money. It was about teaching a lesson,” he said. “Now they see it doesn’t feel good when someone sends you a bill or you see a bill for something that you said you were going to do.”

In a follow-up post that Simmons shared Thursday, he said he received more than 200 messages from people who have appreciated the invoice. Others shared their own RSVP “horror stories,” Simmons said. 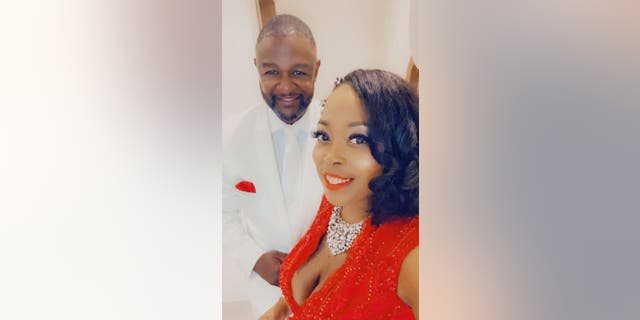 Douglas and Dedra Simmons had a total guest list of 109. Four of their no-show guests had been allowed to bring plus ones.
(Douglas Simmons)

SImmons said he and Dedra had 101 guests show up on their special day and appreciated each person who attended. They also appreciate the guests who let them know in advance that they couldn’t make it.

“We had a fantastic time,” Simmons said. “It was a beautiful day.”

The Simmons’ viral invoice post is still causing a stir on social media and has been shared by comedian DL Hughley and many others. Thousands have since chimed in on where they stand on RSVP etiquette.