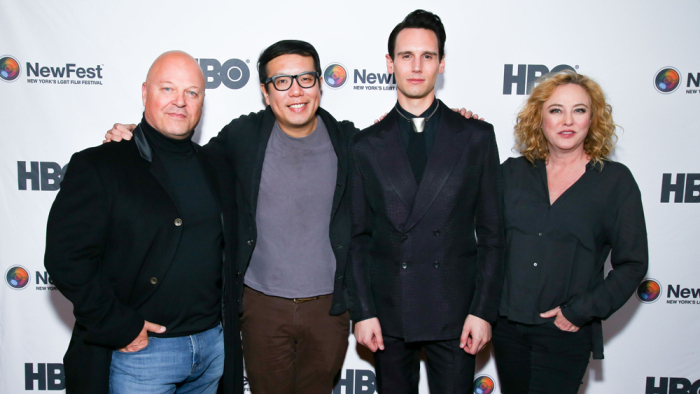 With this week’s news that the Trump administration is moving to define transgender people out of existence and roll back civil rights protections, Wednesdays’s opening of the 30th annual New York LGBT Film Festival, Newfest, couldn’t be timelier or more important. That was on the minds of Cory Michael Smith, Virginia Madsen, and Michael Chiklis, who star in the fest’s award-winning opening night film, “1985.”

On the rooftop of the Gansevoort Meatpacking NYC Hotel, the stars opened up about writer-director Yen Tan’s personal film, which subtly explores divisions in America’s heartland as a closeted young man (Smith) heads home to Texas to face his religious parents (Chiklis and Madsen) near the start of the AIDS crisis.

“I moved to NYC in the spring of 1985 and I was a member of the theater community. It was a terrifying time and we all knew many people who got sick,” Chiklis told Variety. “My first cousin passed away from HIV and his father was very much like my character — a military man, very Christian, didn’t have the tools to understand it. What I love about this film is that it’s nuanced and doesn’t proselytize. It’s just real. This film is vitally important, because we are so polarized and so divided right now.”

It’s something Madsen has dealt with in the starkest terms. “I always wished that I would have the kind of job where what I do artistically illustrates how I feel,” she said. “People realize that I’m probably a liberal democrat, since I’m an artist and I care about the environment, but I feel doing something like this film is more effective than any march. I participate in those, but sometimes I feel it’s dangerous for me, physically, because I get threats — a lot of us do. It’s a very scary time, and so I choose to use my voice through my work rather than on a microphone at a rally, and God bless those who do… I feel we’re not going to get anything done until we meet in the middle and cooperate. ”

Smith believed in the project enough to recruit his “Gotham” co-stars Chiklis and Jamie Chung. “It’s why I have an executive producer credit,” he explained. “I think the film is relevant in that there’s still a stigma about HIV both universally and within the queer community, and to recognize that there’s a deep pain we cause people when we disenfranchise people is a positive thing.”

But an equally important message he wants to get out is about “1985” itself. “There can easily be a trap when you hear it’s a black-and-white AIDS drama set in the ’80s, where it sounds like it’s overwrought or there are histrionics,” Smith said. “It’s a quiet film – an elegy to these men who didn’t necessarily fight, and the power of love and family.”

“When NewFest began in 1988 during the height of the AIDS crisis, our community was being defined primarily through a lens of illness and fear. Empowering images for and of LGBTQ individuals were few and far between,” Kushner says. “It’s just as important in today’s political climate, when our government is proposing erasing not just transgender rights but full recognition of transgender individuals, that we must make sure we’re defining ourselves. LGBTQ filmmakers are leading that charge, and NewFest remains a platform for promoting equality and empowerment.”