In the climate-controlled outbuildings of a restored Georgian villa in western Sydney, the private collection of Peter Collins is on display.

The former Liberal minister's interests run from militaria and Bobby Kennedy to Ian Fleming, sleek cars and aviation. An armoured personnel carrier and its smaller brother, both ex-Australian army, sit in the garden – "great conversation pieces for the past ten years," Collins said. 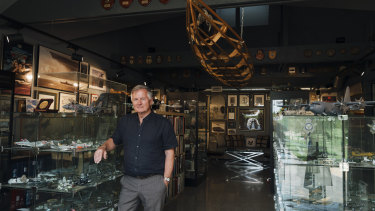 Peter Collins, the new president of the Museum of Applied Arts and Science, amid his private collection. Credit:James Brickwood

What is clear is Collins, the new president of the Museum of Applied Arts and Sciences, is going to be more hands-on than his predecessor, Western Sydney University vice-chancellor Barney Glover. "We've barely scratched the surface of the Powerhouse collection," Collins said. "I want to go through the backlots and see what we've got."

He is brimming with ideas for acquisitions and loans. Charles Kingsford Smith's original hangar sits in a pile at Bankstown Airport – if it was reassembled at Parramatta it could house a replica of the Lady Southern Cross, the plane that took the aviator to his watery grave.

In the US, the Smithsonian's air and space museum has the history of US aircraft hanging from its roof. "Would I like to see a space like that with appropriate aircraft in Parramatta?" he said. "Yep, you bet. We want to achieve a wow effect."

Collins was appointed to the museum board at the same time as billionaire property developer Lang Walker – whom Infrastructure NSW confirms is not bidding to build the Parramatta Powerhouse – and says Walker is the type of business leader he wants to see investing in the institution. MAAS needs to raise $75 million in private donations.

"As a kid when my parents divorced I was sent to live in Bathurst with my grandparents and one of my sole forms of entertainment was to go to the regional museum in William St," he said.

"It was a mini Museum of Applied Arts and Sciences. As a kid in regional NSW, that experience left a lasting impression and I could find my way around the museum even today. My priority is to enliven the imagination of the children of the 2.5 million people who live in western Sydney."

Collins is regarded by the government as a safe pair of hands to transform the Powerhouse museums. Formerly the NSW arts and health minister, he sent the Sydney Children's Hospital to Westmead and it was he who first saw the potential in a young university student by the name of Gladys Berejiklian. Current Arts Minister Don Harwin and police minister David Elliott are former staffers.

He takes up his post as Tuesday’s state budget provided no money for Ultimo's rejuvenation. The most recent of three business cases attempted for the museum and arts precinct is still in draft, an unhappy omen for its project planners. Collins insists the business case "stacks up".

In 2014, regeneration of Ultimo Powerhouse was costed at $350 million. In today's dollars, a minimum of $500 million is likely needed to renew the museum's exhibition spaces and anchor it in the government's desired arts precinct.

Industry insiders say even a budget of that size would not finance a new lyric theatre.

Collins says he is aiming to make the case for "much more" than a $100 million coat of paint, new climate controls, and some changes to the forecourt. He wants the "same quality exhibition spaces" as Parramatta's.

Museum consultant Kylie Winkworth said Collins brings a lot of experience to the MAAS presidency, and an interest in collections was a plus.

"Museum colleagues tell me he was a very good board member at the Australian National Maritime Museum," she said. "We hope Peter Collins will have the authority to stop the rip-off of the Powerhouse Museum's Harwood building and fix the planning mess at Parramatta which is inflicting the wrong museum on the wrong site, without community consent, built on the rubble of Willow Grove."

Only this week a Parramatta street march protested the government's decision to relocate the 1890s Italianate villa Willow Grove to make way for the Powerhouse Museum. The NSW Construction Forestry Maritime Mining and Energy Union (CFMEU) and the NSW Nurses and Midwives' Association have slapped on a green ban to block demolition.

NSW budget shows there is no money for full-scale construction at Parramatta until the 2021-22 financial year. A tender call for early site demolition works has raised fears of a rushed and rough relocation of Willow Grove.

Collins assures the relocated villa would be no replica. "I have a deep commitment to built heritage," he says, likening criticism around the Parramatta Powerhouse to that which dogged the Sydney Opera House.

As to the fate of the Harwood Building, the central storage facility next door to the Ultimo museum, he'd like it to stay in government hands but can see its purpose changing.

"If you were Kennards would you keep a big orange building in the middle of the CBD? The answer is 'no', you'd keep it somewhere else."

"My understanding is the government wants to retain Harwood Building as part of the arts precinct in Ultimo. Whether or not it is the Harwood Building doing exactly what it does now or Harwood transformed to perform a different function for the Powerhouse itself … I would think those things remain open."