NBN Co's revenue climbed 36 per cent last financial year despite an $80 million hit caused by a free six-month bandwidth boost for telco providers and a backflip on its decision to sign on business customers directly.

The national broadband network provided 40 per cent more bandwidth to telcos free of charge in early March as social distancing restrictions put in place due to the coronavirus pandemic caused a spike in network usage. The national broadband network's annual revenue climbed to $3.8 billion despite the offer, which has been in place for six months and expires on September 19. 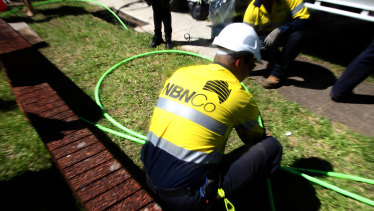 The connectivity virtual circuit (CVC) charge, which covers the amount of bandwidth telcos can make available to customers, is part of the wholesale prices telcos pay to the NBN. The amount of CVC a telco buys affects the internet speed, particularly at peak usage times from 7pm to 11pm.

NBN Co chief executive Stephen Rue said the offer was only ever intended to be short term, but telco providers are putting pressure on the national broadband network to review the fees they pay. Pricing has been a consistent source of tension between NBN Co and telcos, which view the charge as too expensive and a barrier to buying adequate bandwidth.

"Since the introduction of the offer, we have forgone revenue of more than $80 million in CVC capacity charges from internet retailers as part of our efforts to help support increased data use during COVID-19," Mr Rue said.

A large portion of NBN Co's revenue growth was from business, up 40 per cent to $666 million. The figure comes despite the national broadband network announcing in January it would stop signing on business customers directly. NBN Co was originally hoping to generate $1.2 billion in revenue by 2023 from its enterprise arm.

Residential revenue climbed 37 per cent to $3 billion. Average revenue per user in its residential division increased by $1 to $45 and more than 11.73 premises were ready to connect by June 30.

Mr Rue said the network had performed well in the circumstances. "We have stayed the course that we set in 2014 to build the network as quickly as possible and at least cost to taxpayers to provide customers with access to secure, high-speed broadband services.

"Following the completion of the initial network build, we are focused on our future as a customer-led service delivery organisation. This will require us to sharpen our efforts in areas such as customer experience and innovation."

Start the day with major stories, exclusive coverage and expert opinion from our leading business journalists delivered to your inbox. Sign up for the Herald‘s here and The Age‘s here.