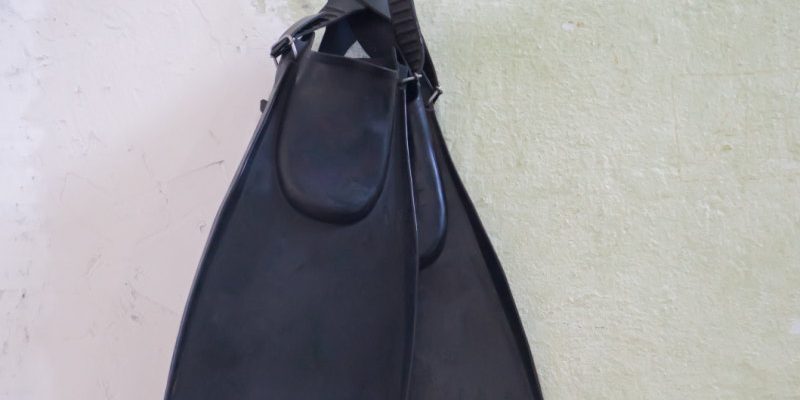 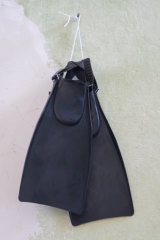 “It was wedged in the sand, protruding like a shark’s fin.” His eyes grew wide. “It was a sign.”Credit:Stocksy

This is a love story. But it is not your average boy-meets-girl scenario. Firstly, there is no boy. Secondly, there is no girl. But there are two rubber flippers …

Back when my husband and I lived a stone's throw from Sydney's Coogee Beach, he ran daily laps of the sand. This exercise had the dual benefits of making him fit and the owner of a variety of mostly useless trinkets. Like a human metal detector, he'd often return from his workouts as the proud new owner of cheap servo-sunnies or tinny junk jewellery.

On one particularly hot, windy day, he stumbled in from his run red in the face, but elated by his most recent find. He stood there puffing, holding up one black swimming flipper.

"Look what I found," he gasped.

"Just the one?" I tentatively asked.

I waited for him to laugh. He looked at me as though I was missing the whole point. "If I find another one, then I'll have a pair," he explained.

I couldn't knock his optimism, but it seemed unlikely he would find the perfect match to this random flipper.

"It was wedged in the sand, protruding like a shark's fin." His eyes grew wide. "It was a sign. It wanted to be found."

Over the following weeks, he scoured the beach during his run looking for a fellow fin friend. Mostly he returned empty-handed. Occasionally he came home with one – but it was too small or too big, the wrong shape or the wrong colour. While he was open to a mixed marriage of flippers, it never felt quite right.

Eventually, he gave up on his quest to find the perfect partner. Then came his next brilliant idea.

"I'm going to sell it," he announced.

"Just the one?" I tentatively asked.

I waited for him to laugh. He looked at me as though I was missing the whole point.

"Someone might have another one and then they'll have a pair," he explained.

He set about preparing his online listing for his solo swim fin. He took a number of photos and then, like a single man choosing his most shaggable shot for Tinder, he picked the best one.

Next he had to write the all important description. He wanted to avoid saying he'd found the flipper. It seemed to devalue this piece of crafted rubber – more so, it would be confessing that he was selling something that didn't belong to him.

He went with an ambiguous post: "This flipper has lost his mate. Maybe you've got one for him?"

Within a few hours, he received a message: "I have a flipper just like the one you're selling. I've just bought myself a new pair. Would you like to buy my old one?"

Was this a joke? How could it be possible that an owner of a matching, single flipper would stumble across this listing in such a short period of time?

Over the phone, the matchmakers discussed the brand, shape, colour, size and dimensions of their partnerless fins. It seemed they'd make an ideal couple. It was arranged that I would meet the flipper-flipper in the city the next day.

It was easy to pick the man I was looking for standing on the street corner. He stood there awkwardly, clasping tightly in his hand one black swimming flipper.

"Hi, I'm here to collect that," I beamed, pointing to his hand. I handed him the money. The transaction was complete. Almost. "I know you found my lost flipper," he blurted out.

I gulped. My husband had never admitted he'd found someone else's missing fin, but he'd never claimed he'd lost one of his own either.

"Do you want to hear what happened?" he asked.

I quietly nodded. I had the right to remain silent.

"I was bodysurfing at Cronulla when I got hit by a huge wave," he said. "When I came up, my flipper was gone."

"But we live in Coogee," I argued. "Surely it couldn't resurface 30 kilometres away?"

"It must have washed up there." He was convinced.

I waited for him to laugh. He looked at me as though I was missing the whole point.

That evening I went home with the flipper safely tucked in my bag.

As I entered the front door, I called out to my husband, "I've got it!" He came bolting down the corridor with his lonely flipper in hand. I pulled out the other one from my bag. It was as though I'd produced a mirror. They were a perfect match. Destiny had finally reunited these two lost soles.

This article appears in Sunday Life magazine within the Sun-Herald and the Sunday Age on sale March 17.