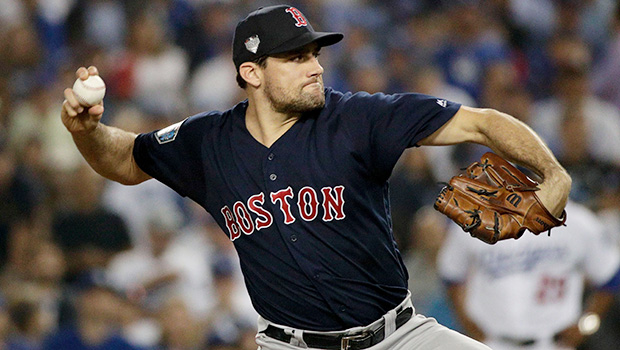 Boston Red Sox pitcher Nathan Eovaldi gave one of the most impressive performances of his career in Game 3 of the World Series on Oct. 26, which went on for a history-making 18 innings. Here are five things about him.

Nathan Eovaldi, 28, proved he’s one of the greatest pitchers in baseball history when he gave it his all in the shocking third game of the 2018 World Series on Oct. 26, which became the longest one in history after it lasted for 7 hours, 20 minutes with 18 innings. Coming off of a 2-0 lead, the Boston Red Sox player seemed to have a rubber arm as he pitched 97 times throughout the night to try and win for the third straight time against the Los Angeles Dodgers. Although the Dodgers ended up taking the game, making the current World Series game score 2-1 with the Red Sox leading, Nathan impressed many fans with his incredible endurance and sportsmanship. Here are five things you should know about the amazing athlete.

1.) He grew up in Texas and started playing baseball at a young age. Nathan started showing his strength as a baseball player when he played for his high school’s baseball team in Alvin, TX. By his senior year, he became an honorable mention on Texas’ all-state team and eventually committed to attending Texas A&M University on a college baseball scholarship.

2.) Before he played for the Boston Red Sox, he played for many other teams, including the Los Angeles Dodgers in 2008. He was selected for the Dodgers in the 11th round of the 2008 MLB Draft preceding his commitment to Texas A&M and he received a $250,000 signing bonus. After going through the Dodgers’ farm system, he eventually started playing for the majors in 2011. He then went on to play for the Miami Marlins from 2012-2014, the New York Yankees from 2015-2016, and the Tampa Bay Rays for part of 2018 before joining the Red Sox.

3.) He had two Tommy John surgeries in his career which makes his “rubber arm” in the latest World Series game even more impressive. His first surgery took place when he was a junior in high school in 2007 and it was meant to repair the ulnar collateral ligament in his right elbow. His second surgery happened in Aug. 2016 after he got hurt when he was playing for the Yankees. He was diagnosed with a torn flexor tendon and a partially-torn ulnar collateral ligament in his right elbow and the surgery caused him to miss the rest of the season that year before he was eventually released by the Yankees a few months later on Nov. 23.

4.) Before the 2018 World Series, Nathan had never pitched on consecutive days in his major league career. After being sent to the mound for the third time in four days and throwing 98 mph in his seventh inning of relief, he definitely made his mark in the sport. “I felt good the whole time,” he said after the iconic game on Oct. 26. “I told AC, ‘I’m good. I want to stay in.’” He became Boston’s record-tying ninth pitcher at the start of the 12th inning in the game.

5.) His incredible performance on Oct. 26 left a lasting impression on fellow Red Sox players and players from the opposing team. After some people in the sport doubted Nathan’s pitching abilities due to his surgeries, he definitely proved he has what it takes to earn his way to the top. “I felt privileged to be able to watch what Nathan Eovaldi did,” Red Sox starter Rick Porcello said after Game 3. “That was the most incredible pitching performance I’ve even seen.”