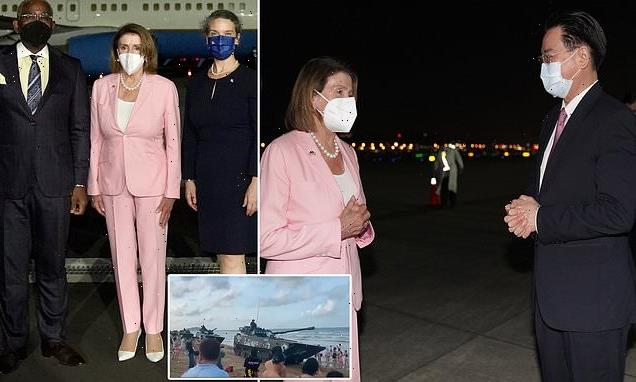 Nancy Pelosi is taking a noble stance, but she’s dousing the fiery breath of the Chinese dragon with petrol, writes MARK ALMOND

Nancy Pelosi, the Speaker of the US House of Representatives, is a principled woman.

Her visit to Taiwan is entirely consistent with the admirable stance she’s displayed against the Chinese government since it massacred thousands of its own protesting citizens in Tiananmen Square in 1989.

Pelosi has been a Cassandra figure on Capitol Hill for decades, warning of Beijing’s menace but ignored by the Washington establishment – much as Winston Churchill’s warning about the danger of Hitler’s Germany in the 1930s was only heeded too late.

Pelosi doubted the consensus which held that as its economy grew, China would fold into Western institutions and begin to behave like us. It hasn’t. It won’t. And she was right. 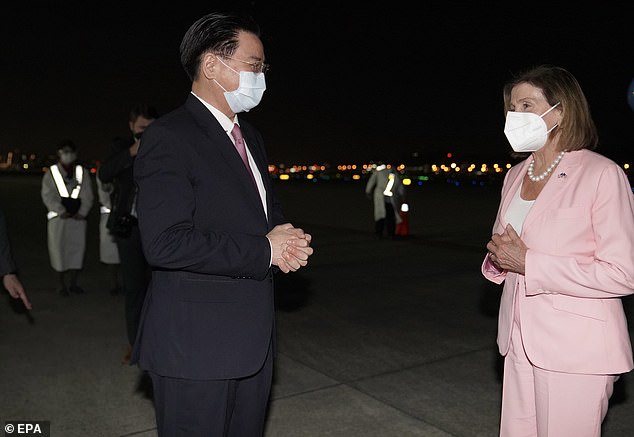 Nancy Pelosi, the Speaker of the US House of Representatives, is a principled woman, writes Mark Almond. Pictured: US House Speaker Nancy Pelosi being greeted by Taiwan Foreign Minister Joseph Wu 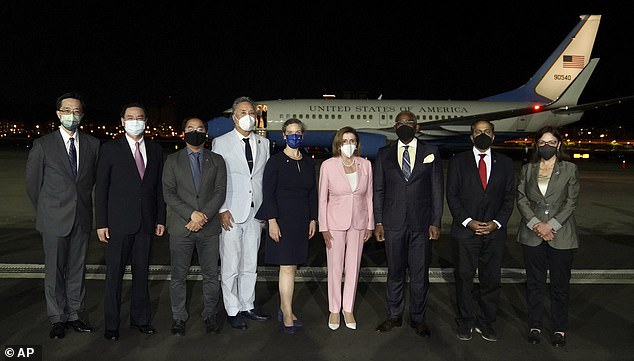 U.S. House Speaker Nancy Pelosi posed for photos after she arrived in Taipei, Taiwan. She became the highest-ranking American official to visit in 25 years

But by visiting Taiwan – officially part of the People’s Republic of China but in reality an independent democracy for more than 30 years – Pelosi is dousing the fiery breath of the Chinese dragon with petrol.

I wonder how thankful for her principles the denizens of the Taiwanese capital Taipei would be when their city resembles downtown Kharkiv?

For her visit is dangerously provocative to the Chinese for whom having a Chinese-speaking democracy just 100 miles away from the mainland is unacceptable.

And with so much military hardware in the South China Sea region, the potential for one spark to light the tinderbox of war is alarming to say the least.

There are moments in history when one event defines an era. The shooting of Archduke Franz Ferdinand in 1914 ignited the First World War, while the torpedoing of the USS Maddox in the Gulf of Tonkin, a few hundred miles south of Taiwan, in 1964 raised the curtain to the horrors of the Vietnam War.

Could history judge a wholly unnecessary visit to Taiwan of a US House Speaker, now in her 80s, in a similar vein? History is important here.

There are those who see Pelosi’s pitstop to the disputed island (part of her tour of East Asian countries) as a show of strength, a sabre to rattle across the Strait of Taiwan at the swelling number of naval ships ranged against the island in China’s southern ports.

The exact same show of solidarity was lacking in the build-up to the Ukraine war. So, goes the thinking, if the West had only stood up more to Moscow, wrapping its arm more protectively around Kyiv early on, then Russia would never have felt emboldened enough to invade. I, however, am with the late historian AJP Taylor when he warned that we like to avoid history’s past mistakes by making new ones.

Beijing has certainly taken the bait. The Chinese government warned of repercussions if Pelosi pushed ahead with her trip, saying its military would ‘never sit idly by’.

The distinction that she is acting independently of President Joe Biden – who must be squinting at events through his fingers – will be lost on most Communist apparatchiks. On a visit to Japan in May, Biden made it clear that the US would be prepared to defend Taiwan if it were attacked. 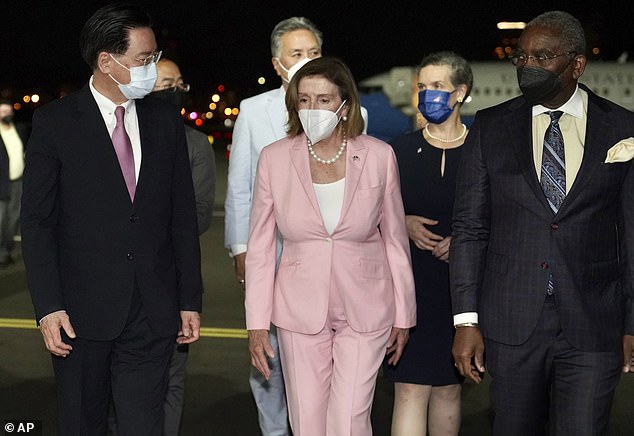 In the last couple of days, Chinese warplanes have buzzed around the median line that divides the two countries in the Strait of Taiwan.

Several of its warships have sailed provocatively close to the unofficial line too. Yesterday video emerged purportedly showing amphibious tanks lined up on beaches on the Fujian coast opposite the island.

But it is difficult to gauge just how serious the Beijing rhetoric is. President Xi Jinping is buffeted by domestic headwinds, not least by the state of the economy, hobbled as it has been by his zero-Covid policy.

From April to July, the country’s epicentre of world trade, Shanghai, a port city of 24million people, has been under lockdown.

Workers haven’t been able to get into factories, which, in an economy built around manufacturing, has crippled exports. So anything that distracts attention from his failing Covid strictures will be warmly embraced by Xi. Yes, he might be playing to the public gallery, but make no mistake, the gallery is fervently nationalistic and will lap up any show of might against the West. 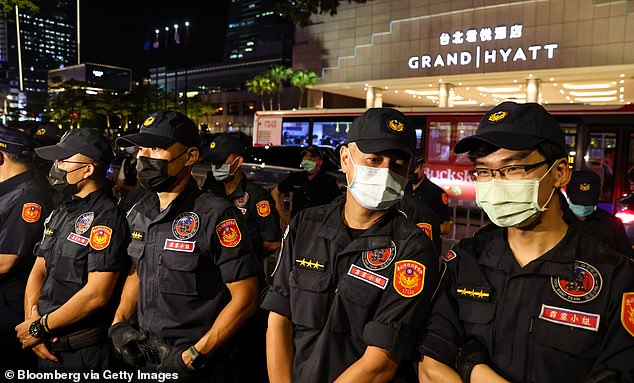 And Nancy Pelosi is a particularly incendiary figure in China. She was kicked out of the country in 1991 for unfurling a banner in Tiananmen Square commemorating those shot dead there two years before.

Now she is third in line to the US presidency. As Speaker, if anything were to happen to Biden or Vice President Kamala Harris, she would be given the keys to the Oval Office. A figure of her seniority hasn’t visited Taiwan since Republican Speaker Newt Gingrich did in 1997.

Back then, all China could do was blow hot air. It was seeking to join the World Trade Organisation and needed then president Bill Clinton’s agreement.

A member since 2001, China is in a much stronger position now. Today it also has a forceful ally in Moscow which, 25 years ago when Gringrich was in Taipei, was mired in the economic chaos of Boris Yeltsin.

The war in Ukraine is also a telling difference. President Vladimir Putin is slowly degrading the West’s military arsenal. The sophisticated, American-made HIMARS rocket systems, for example, have been pouring into the Donbas of late. The Pentagon hoped each set of warheads would last the Ukrainians a month, but they are burning through them in two to three days. 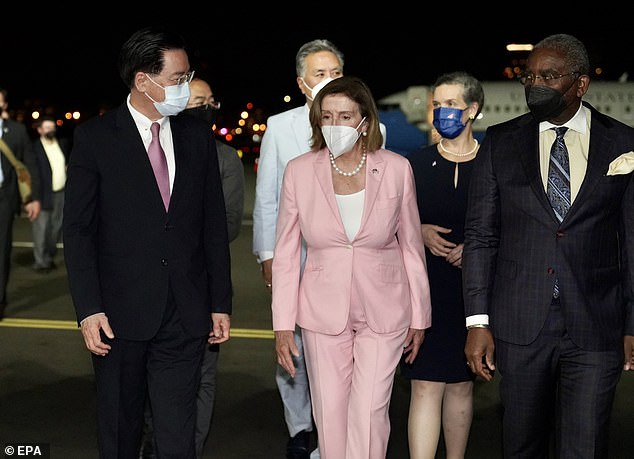 Let’s pray that those sirens are never sounded for real, for then the nuclear fuse will be well and truly lit – and I’m afraid Nancy Pelosi will have held the lighter, writes Mark Almond. Pictured: US House Speaker Nancy Pelosi being greeted by Taiwan Foreign Minister Joseph Wu

Could the West really put up a fight in the South China Sea? Britain would certainly deploy one of its aircraft carriers to support the US and Japanese navies as a deterrent. But would they open fire on a nuclear-armed country? We haven’t yet. Would the West want the Taiwanese to do that with weapons donated by us? America’s condition for supplying Ukraine with rocket systems was that they were not fired into Russia, after all.

Xi could use the Pelosi visit as a pretext to a blockade of Taiwan. And while much has been made of the impact on global hunger of Ukrainian grain holed up in Black Sea ports, a sudden drop in Taiwanese-made electrical semi-conductors, used in everything from phones to computers, would hurt the West far more.

Xi may feel bold enough to even attack Taiwan’s smaller islands close to China’s coast, last done under Mao. Or, short of a very tricky amphibious invasion, its missiles could bombard the main island, turning high rises and shopping centres to rubble, much as Russia has done in Ukraine.

I wrote on these pages last week about the mournful wail of air-raid sirens clearing the streets in Northern Taiwanese towns as part of the Taipei government’s mass defence drill then.

Let’s pray that those sirens are never sounded for real, for then the nuclear fuse will be well and truly lit – and I’m afraid Nancy Pelosi will have held the lighter.

Mark Almond is the Director of the Crisis Research Institute, Oxford