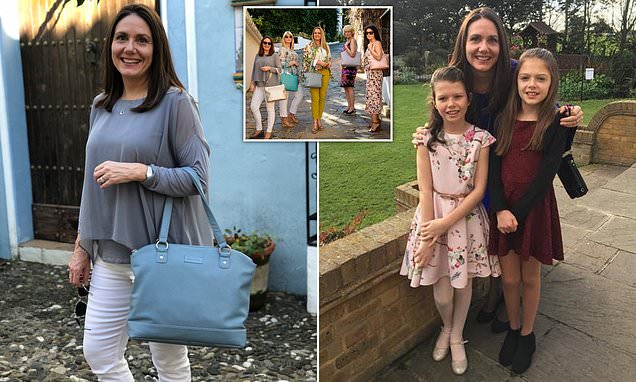 A mother-of-two who launched her own bag range despite having no previous design experience has generated  a turnover of £4 million since launching her business in 2011.

Charlotte Jamme, 47, from Milton Keynes, who lives with her children Amelia, 13, Mia, 12, and her husband Philippe, 54, was living in Vietnam when she came up with the idea of designing a handbag.

After struggling to find one that suited her needs, the mumtrepreneur set about creating a product which would work for her while regularly on the go with her daughters – and Mia Tui was born.

Growing the brand with no investment, Charlotte has since gone on to sell her award-winning bag range, which start at £5, on QVC shopping and her own website – and it has also been stocked in the likes of John Lewis and Jo-Jo Maman Bebe. 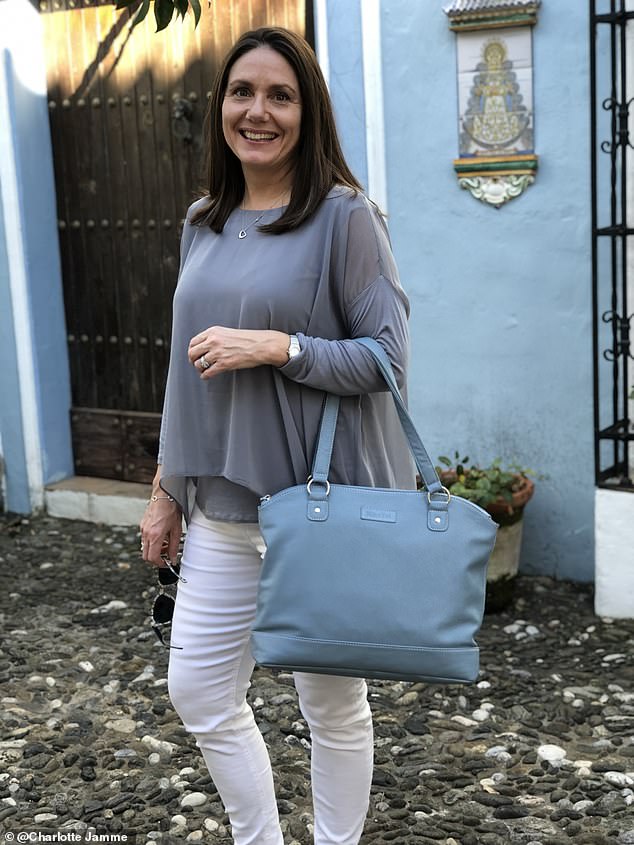 Charlotte Jamme (pictured)  47, from Milton Keynes, had no design experience before launching her successful bag range. She now sells the products on her website and QVC and has since generated a turnover of over £4 million. Above, with the ‘Charlotte’ bag

The mother-of-two, who lives with her children Amelia, 13, Mia, 12 (above) and her husband Philippe, 54, has formerly had her products stocked in John Lewis and Jo-Jo Maman Bebe

It was her husband Philippe’s job in the wine and spirits industry that took the couple to the Far East back in 2004.

‘I was living in Vietnam when I came up with the idea of making a travel bag – my two girls were three and four,’ said Charlotte. ‘I would travel alone with the two girls and could never find anything in my bag. Everything would sink to the bottom, and as the lining was generally black you could never find or see anything.’

She continued: ‘On a girl’s weekend away with all the kids we got talking on what would make the perfect travel bag – it had to have pockets and be large enough to find things. This then got my imagination running and I started to draw up some ideas.’

It was around April of 2010, that Charlotte designed her very first bag, which she named after her eldest daughter. 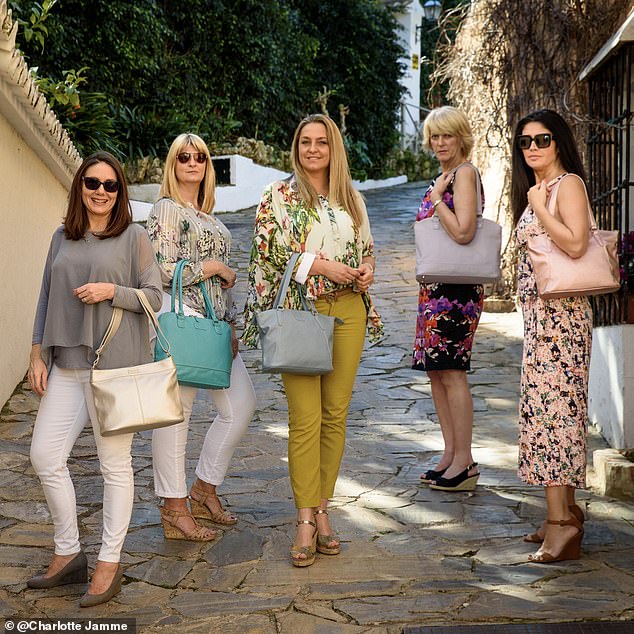 While the mumtrepreneur extended her range, each bag was designed specifically to help busy mothers stay organised when on the go 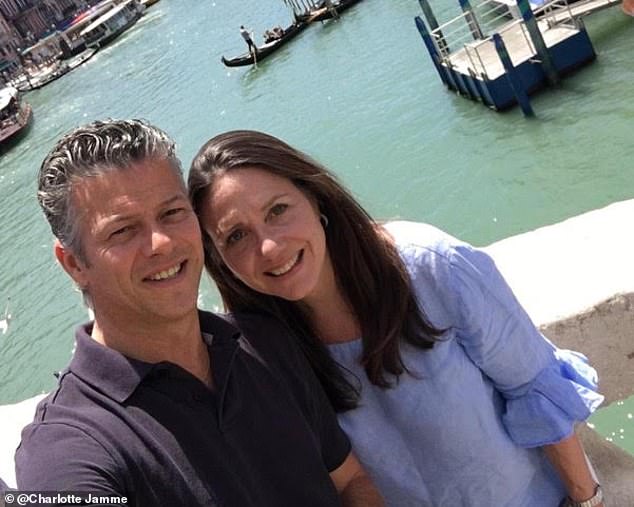 ‘Charlotte was living in Vietnam with her husband Philipe, 54, (left) when she came up with the idea of making a travel bag 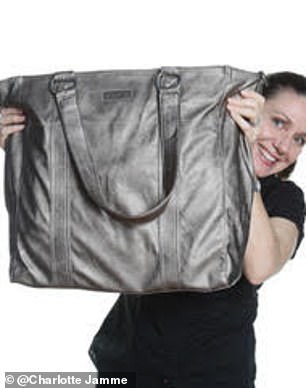 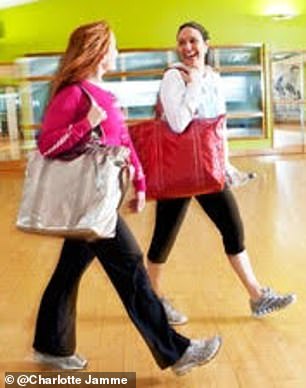 The first bag that Charlotte designed was the Amelie (above), which she named after her eldest daughter. It is a large travel bag that allows you to actually find things inside

‘The Amelie is a large travel bag that actually allows you to find things inside,’ explained Charlotte. ‘I had a rough sketch on how I wanted the bag to look, and more importantly how the inside should look, and found a company that said they could make a prototype.’

‘But when the bag came back it was the ugliest thing I had ever seen. So I went to the local markets in Vietnam, looked at fabric, and bought a small quantity to make my sample.’

She continued: ‘My husband was making some promotional items for his company and put me in contact with a lady who could help me make my design. She took away my drawings and actually came back with a bag that looked like it could work.’

The family travelled back to the UK in the June 2010 and Charlotte found her bag made travelling easier. But the next challenge the mother-of-two faced was finding someone who could actually take the bag and make more than one.

‘I met someone called Van,’ said Charlotte. ‘She spoke English and understood what I wanted to achieve and said she would help me. So together we made our first 200 bags in a small room above a house, which I sold at expat fairs.’

But it wasn’t all plain sailing as Charlotte had the task of juggling her new business with looking after her children. 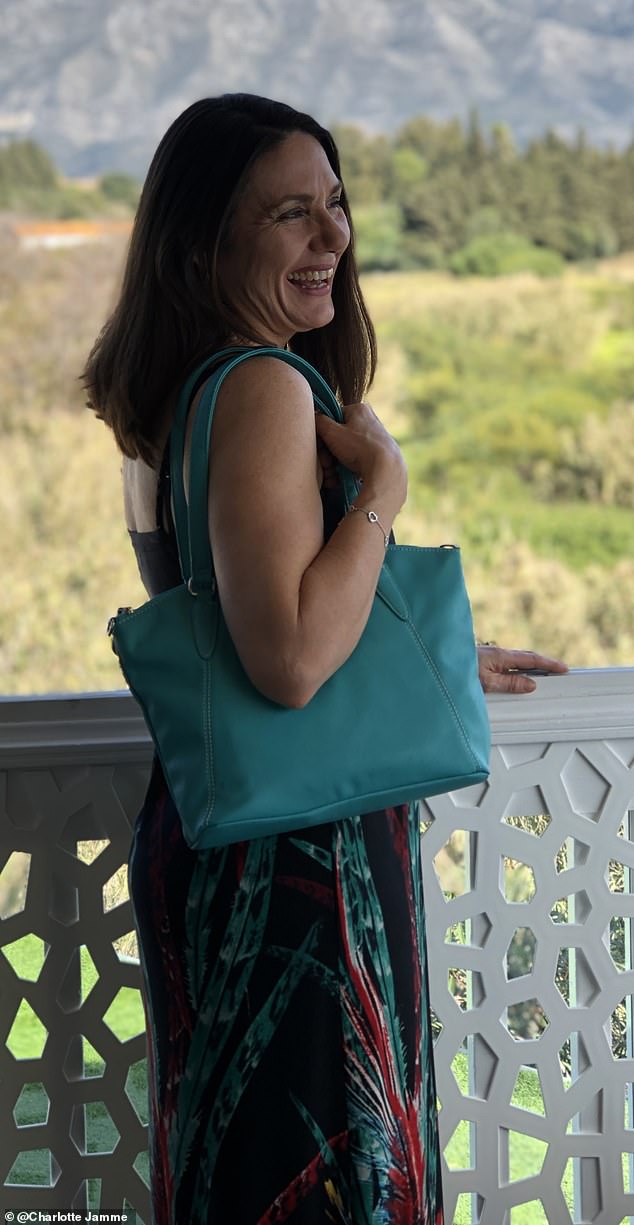 Charlotte specifically designed her bags from the inside out to meet the needs of busy women needing organisation in their bags. Above, with a popular choice from her range 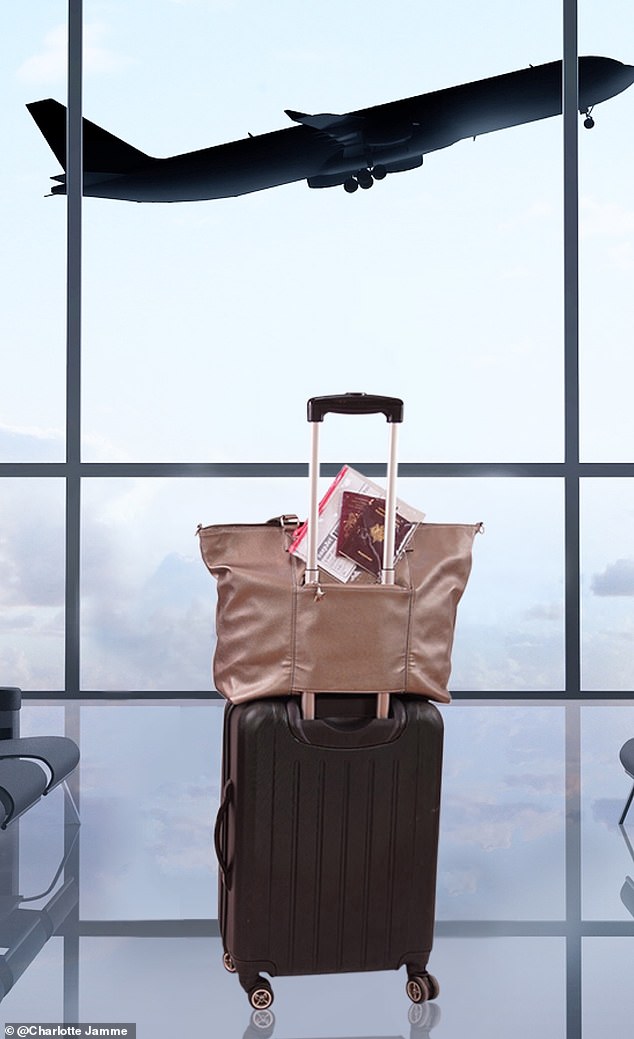 Pictured, the Jennie bag from Charlotte’s range, which can be bought on her website or QVC for £55

‘It was a bit crazy,’ she explained. ‘I was going to the markets looking for fabric, and having bags made then trying to sell them. I flew to Hong Kong and Singapore to sell the bags at Christmas and expat fairs.’

She continued: ‘Even though I was so busy juggling kids, I felt like I was starting something big. Everyone loved the travel bags.’

And Charlotte had to overcome many obstacles, including a whole batch of products which were deemed unsellable.

‘I received a whole container of bags that were due to be to be sent to John Lewis and Jo-Jo Maman Bebe,’ she explained. ‘But it was by facing them head-on and working tirelessly to find a solution that I could move things forward.’

While the teething issue affected Charlotte’s cash-flow, the turning point came on the 1st April 2015.

‘I had always wanted to get my bags on to QVC as I thought that selling on TV would really allow me to showcase the bags and the unique interiors,’ explained Charlotte. ‘I had applied many times and got rejected.’ 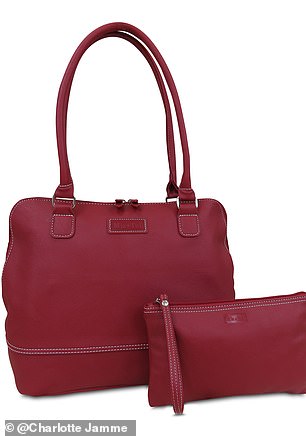 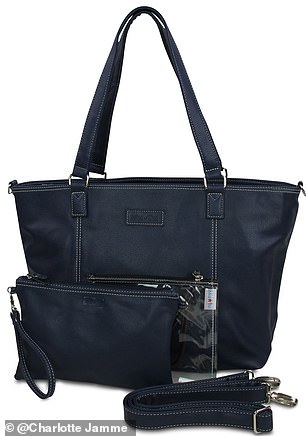 Charlotte has always sold her bags on the Mia Tui website, but the first retailers who stocked the range were John Lewis and Jo-Jo Maman Bebe 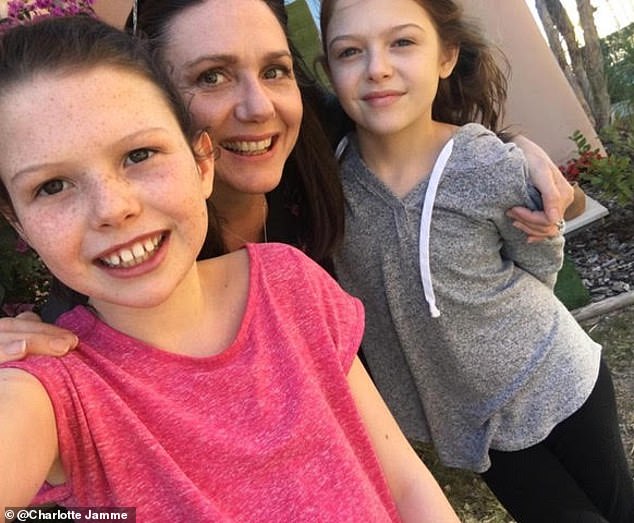 Charlotte revealed that her daughters Amelia, 13, Mia, 12 didn’t like Mia Tui for many years. She said ‘they saw it take their mum away at weekend to work shows, or being upset when things don’t go to plan’

She continued: ‘I managed to get some samples to a buying team, and then I got the call from my then PR agent who said to me “sorry they didn’t like the bags.” My heart sank, then came “April fools!”. They loved the bag and wanted me to go and meet the buyer in May.’

After Charlotte had the successful meeting, she called Van in Vietnam and told her the good news.

‘We then had to work out how we would get the bags made and shipped in time,’ she explained. ‘In the end I had to fly in the bags which is so expensive, but I believed this was the turning point and worth the cost.’

‘I had already designed two new bags by the time we arrived back into the UK and had created two-three bags a year since,’ she added. ‘Our range of travel handbags are unique as they have a hidden pocket to slip over standard suitcase handles making travel easy.’

And on 5th August, two years to the day when she had received the unsellable bags, Charlotte found herself standing in front of the TV cameras selling three from her Mia Tui collection.

‘I have always sold my bags on the Mia Tui website, but our first retailer was John Lewis and Jo-Jo Maman Bebe,’ she explained. ‘Two styles were baby changing bags, and we’ve won the “best changing bag” with The Mother and Baby Awards four times.’ 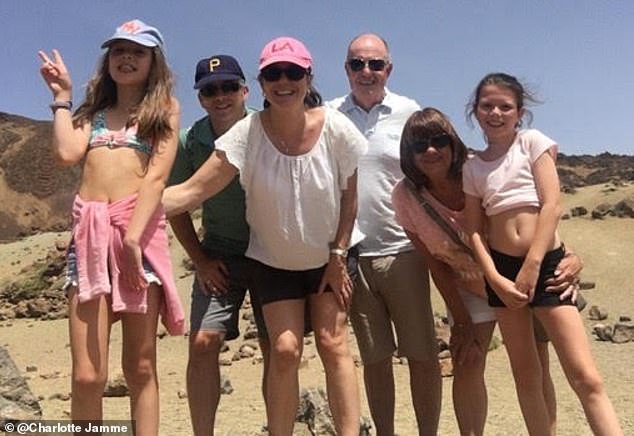 The family moved back to England in June 2010 and five years later, Charlotte found herself standing in front of the TV cameras selling three of her Mia Tui bags. Pictured, the Jamme family 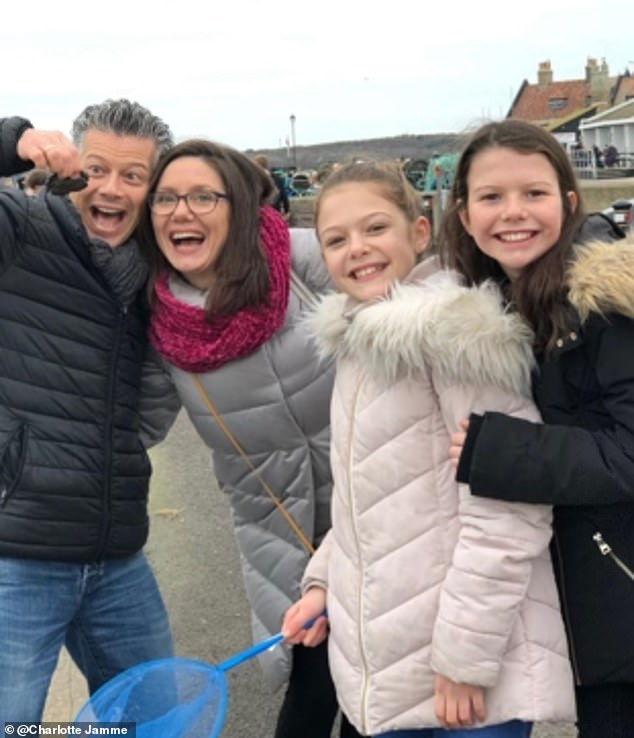 The family are delighted with the success of the company which launched in the UK in 2011. Pictured, Philippe, Charlotte, Amelie and Mia

‘It’s all consuming, you play “chicken” with school pick up time, running late as you need to send that last email,’ Charlotte said, explaining what life is like with a successful business and two children.

‘You give up a piece of yourself. You try to be the perfect mum, wife and business woman, and for that you always feel a slight failure in all aspects.’

She added: ‘The girls didn’t like Mia Tui for many years. They saw it take their mum away at weekend to work shows, or being upset when things don’t go to plan.

‘They were super proud when our Instagram account got the blue tick – somehow, I was famous, all their friends had noticed.’

Charlotte’s bags are all designed from the inside out to meet the needs of busy women needing organisation in their bags – and even Jane McDonald used the brand throughout her Channel 5 series.

And the successful mumtrepreneur has words of advice for anyone else who may be eager to go down the business route.

‘It takes time,’ she explained. ‘I remember hearing someone say “you’re a ten year overnight success” and it’s so true. You don’t know how long or the path someone has travelled to become successful.’ 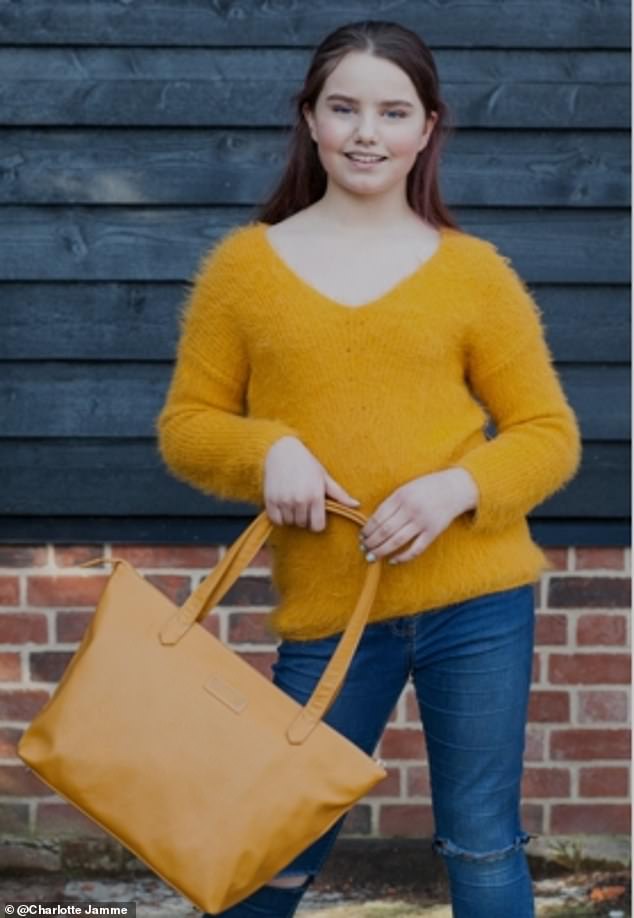 She added: ‘Also go with your gut, all my mistakes have been because I have not listened to my gut feeling, don’t doubt yourself.

‘Being an entrepreneur is lonely. Try and find a networking group that can give you some support. Don’t be afraid of making mistakes, as long as you learn from them they are not all bad.’

Now, Charlotte’s business has generated a total of £4 million since it launched in the UK in July 2011 – something which she said she ‘can’t believe.’

‘I actually think we will finish this year 31st March at around £2 million alone,’ said Charlotte. ‘It’s been a rollercoaster of a ride, and one that I have just hung on to and tried to enjoy. I am very proud of what I have achieved.’

She now employs a team of six and has moved from working in her own kitchen to warehouses and two units in Newport Pagnell and a factory in Vietnam – where she was living when she came up with the idea.

‘I have an amazing team, who are all instrumental to the growth,’ said Charlotte. ‘We have a solid foundation of customer service which I hope sets us apart from other companies.’