Multinational food companies are investing millions in Australia to measure agricultural greenhouse gas emissions, which analysts say is a move to avoid being stung with trade tariffs or charges by countries that have set global warming goals. 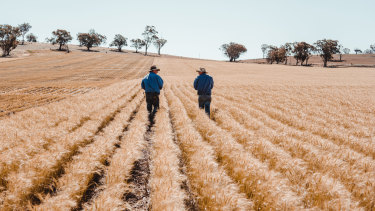 Companies that rely on the agriculture supply chain are investing $2 million in the Mars Cool Soil initiative to help 200 grain farmers reduce and measure their carbon emissions.

Private companies that supply those markets "are making sure they have measurements in place" so they can prove compliance with reduction targets, Mr Heath said.

At the UN General Assembly in September, China pledged to go carbon neutral by 2060. The agriculture sector in the UK is lobbying its government over post-Brexit trade deals to ensure importers without climate targets that match their own face higher barriers. Australia is negotiating a trade deal with the European Union – which is pushing for a carbon border tax for high-emissions products.

It remains to be seen if any country will meet their long-term emissions reduction goal, but the fact that they are in place has spurred industry into action. In Australia industry is moving ahead of the federal government, which has said it will achieve net-zero emissions by some time in the second half of the century.

"We are already seeing large global food producers set emissions reduction targets and (farmers) could be locked out of those supply chains unless they have the evidence to demonstrate they comply with those targets," Mr Heath said.

Australia's farm sector is moving to align itself with the international industry trend to emissions targets. The National Farmers' Federation has set a target for net zero emissions by 2050. Industry peak lobby group GrainGrowers has endorsed the NFF's plans and committed to develop a grain-specific target for 2030 within the next 18 months. The red meat sector set a goal in 2017 to reach net-zero by 2030.

Charles Sturt University is contributing expertise for the Cool Soil initiative. Professor of Food Sustainability Niall Blair said it would provide a baseline measurement of the level of carbon already stored in farmers' soils, help them to implement practices to capture more and then deliver an accurate reduction measurement.

"We're working with them to look at practice change like rotating crops or using more organic fertilisers and following through with the data and the science behind it to show the actual uplift in production, hopefully a reduction in costs, and importantly tracking that reduction of greenhouse gas emissions on the way through," Professor Blair said.

Kellogg agribusiness director Chris Stevens said more sustainable farms would "future proof" the supply chain. "We want to ensure that there is a long term sustainable production from our farmers," he said.

"It's a win for everybody but in particular for the farmers who can ultimately get better yields, making a more resilient crop," Mr O'Sullivan said.