It’s a tricky book to describe, simple and yet complex, addressing many of life’s big issues. At first glance, it seems like a kids’ book but it’s engrossing for adults. I read it in one sitting and was moved to tears on several occasions.

Called The Boy, the Mole, the Fox and the Horse, it was created by English artist Charlie Mackesy; since its release in October 2019 it has sold seven million copies worldwide including 220,000 in Australia. Clearly, it’s struck a chord. 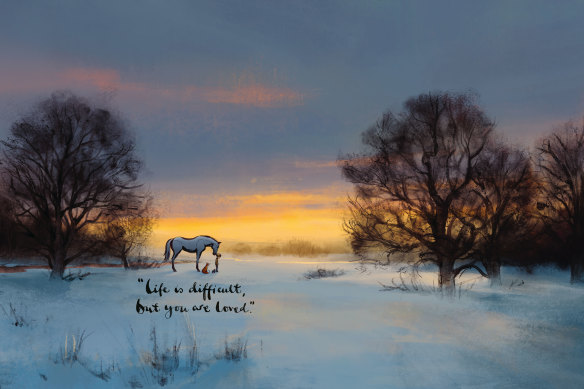 “Life is difficult” from The Boy, the Mole, the Fox and the Horse by Charlie Mackesy,

There’s a touch of the AA Milne about it, something reminiscent of the simple beauty of his Winnie the Pooh books, with similar wisdom and philosophy to that apparent in those stories.

Here’s a moment that illustrates something of its appeal. “What’s the bravest thing you’ve ever said?” asked the boy. “Help,” said the horse.

On Christmas Day, a film version will be released on Apple TV+, with each of the creatures voiced by much-loved actors. Gabriel Byrne is the horse, Idris Elba the fox and Tom Hollander the mole; the boy is played by newcomer Jude Coward Nicoll.

Speaking from the UK ahead of the animated version’s release, Mackesy remembers the moment he came up with that image. “I remember drawing that and having a conversation about what courage looks like. One of the bravest things is to say where you really are, that’s courageous,” he says. “There’s something incredible about having the courage to say help: to reveal yourself and show your weaknesses, it’s a strong move.”

The book began as a series of one-off, individual drawings that Mackesy – a book illustrator and once a cartoonist at The Spectator – would send to friends if they were having a tough time, or if he was thinking about someone. When he started posting them on Instagram, he was always surprised at the reactions.

“I didn’t know if they were good enough for a book. A lot of them were conversations I’d had,” he says. “What’s strange is I didn’t have to do more to create a book, I just had to reorder things. I realised that subconsciously, I had written a story. If you saw my studio you would laugh, it’s tens of thousands of drawings, it’s a whole house of drawings really, so it was a process of elimination.

“The narrative is in the conversation more than the events, I didn’t feel burdened by having to say ‘this happened and this happened’. If you have a cup of tea or a pint with friends, not much happens, it’s a conversation. Things do happen [in the book] but that wasn’t really the main thing, the main thing was what they were chatting about.” 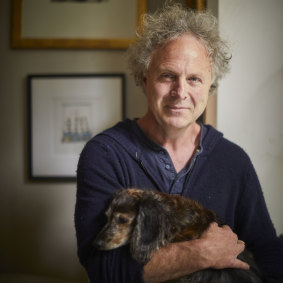 The Boy, the Mole, the Fox and the Horse reads almost like a guide to living a good life. Does Mackesy see himself as a philosopher?

“I would never call myself a philosopher. But you reach a stage in life where you know what’s important. The roads you took that were dead ends and what does really matter and what doesn’t. It surprises me what does matter. I’m not saying anything new, it’s just a lifetime of conversations with other people and lived experiences. I remember thinking if I get hit by a bus tomorrow, what would I regret not saying? And I also think the simpler we can be, the more direct, the better.

“One of the things we can do as humans, as people, is help each other understand by not going down rabbit holes of complexity that baffle us.”

The book was released six months before the pandemic hit. Like Julia Baird’s Phosphorescence, it seems like a prescient offering.

“There’s some kind of synchronicity going on. When I made this I had a strong feeling that we had to get it done, we have to finish this somehow,” Mackesy says. “There was an urgency and I wasn’t sure why.” 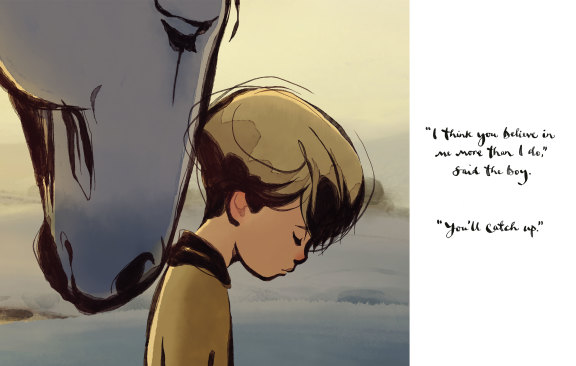 “You believe in me”, from The Boy, the Mole, the Fox and the Horse.

Much to his delight, the National Health Service in the United Kingdom started using images from the book on screens throughout the hospitals. When they asked could they use them elsewhere, he said yes, of course.

“So they were used in psychotherapy units, cancer wards, kids wards, wherever they could – I was staggered by that. A lot of the drawings were related to the storms – that they end, and that storms get tired too, that kind of thing.

“That was one of the greatest moments of my life … and then seeing them in schools and on lampposts in California. I don’t know, if you can find a way of helping other people, it’s so satisfying, I never imagined that it would ever bring comfort to people I’d never meet. Seriously, it’s a strange thing.”

During lockdown, there were several approaches from filmmakers to adapt the book but Mackesy decided to do it himself, co-directed with Peter Baynton (of The Tiger Who Came To Tea), and adapted from the original book in collaboration with Jon Croker.

Mackesy is still processing the success of his creation and how it has resonated. “For me, the book is about being a human being … it’s about the journey of existence and being as honest and as loving as you can.”