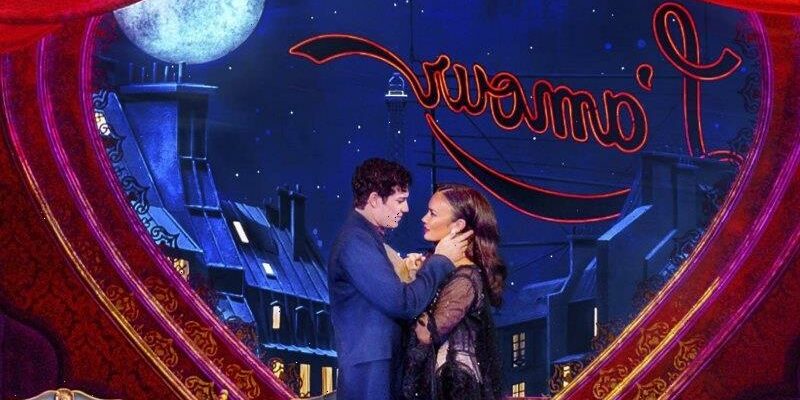 Big-budget musical theatre has returned to Melbourne with the hotly anticipated premiere of Moulin Rouge! The Musical. It’s a chance to see Baz Luhrmann’s pop-powered romantic fantasy transformed into a glamorous stage spectacular with strong performances and sky-high production values, and anyone who enjoyed the movie should make a beeline for it.

In fact, whatever you thought of the film is likely to be what you think of the stage show. Where the Strictly Ballroom musical departed from the charming spirit of the original, the Moulin Rouge adaptation doubles down on the glossy confection that inspired it, so those with reservations might do well to abandon their critical faculties and surrender to the occasion.

I’m one of those disturbed by Luhrmann’s cartoonish reworking of cap-R Romanticism. The film always seemed to me as much a betrayal as a celebration of bohemian life.

The Hollywood blockbuster is an uncomfortably mainstream frame for artists, courtesans, and misfits from an iconic Parisian cabaret, and the postmodern soundtrack often seemed to work against rather than for the underdogs: songs from a barrage of popstars flew in the face of cabaret’s subversive essence, and left no emotion unmolested by a vaguely adolescent sense of nostalgia.

The last difficulty afflicts the score of Moulin Rouge! The Musical in spades. It’s a production so jam-packed with manic medleys and mashups that it resembles less a jukebox musical, or even a mixtape musical, than it does a merry war between teenagers vying for control of the playlist on their smartphones. 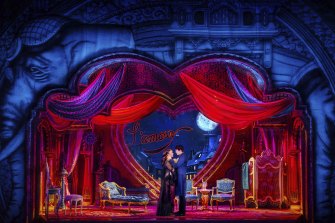 When the music is tethered to dramatic action and feeling, the playful soundtrack can work wonders. When it isn’t, decadent and theatrically incoherent stage business ensues.

Highlights and lowlights abound, though no one can fault the performers, whose unfailing talent and energy are the mainstays of the show.

Among the successes are a terrific sing-off between Satine (Alinta Chidzey) and Christian (Des Flanagan) as they fall in love. Their megamix quotes around 20 famous love songs, from The Beatles to Natalie Imbruglia, and the sheer profusion of bangers propels delightfully silly romantic comedy.

Chidzey sings like the star she is, making an unforgettable entrance on trapeze with a seductive number that shifts from a towering rendition of Diamonds Are Forever to the feistiness of Beyonce’s Single Ladies. (That she can evoke emotional fragility from a Katy Perry song is a marvel, too.)

Opposite her, Flanagan faces less inspired musical arrangements – some shmaltzy, some just plain weird – but makes a winning leading man. His best moments tend to come alongside fellow bohemians and comrades in arms, Ryan Gonzalez’s Argentine lothario and, notably, with Tim Omaji as Toulouse-Lautrec in a delicate and soulful duet of Nature Boy. 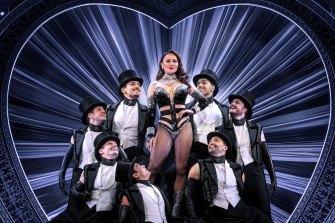 One key scene from the film – Kylie Minogue’s cameo as the absinthe fairy – gets brilliantly transformed. Simon Burke rises from an otherwise strained comic performance as a broke impresario to lead the company in a wormwood-inspired fantasia that soars into a choral version Sia’s Chandelier.

If the pop medleys sometimes gun down genuine emotion by spraying bullets of mere recognition everywhere – so much so that the rapid-fire changes of musical phrase can feel like an unpleasant neurological test – some bizarre musical choices work despite themselves: Andrew Cook’s Duke has a pantomime villain quality made more grotesque when he sings, of all things, Rihanna’s Only Girl (In The World).

With dazzling set and costumes, dynamic choreography, vocal power and as much glitz and sparkle as anyone could ask for, it’s hard to imagine anyone leaving unentertained, and seeing the cream of our musical theatre talent on stage after such a long absence is something any theatre lover will welcome.