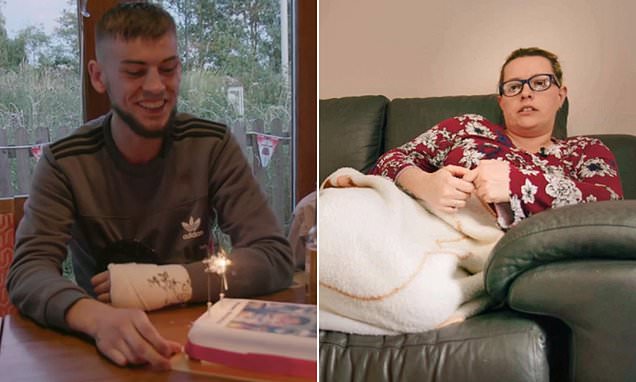 A mother who sold her car and used money she’d been saving for a holiday to pay off her son’s debts revealed she ‘hopes he goes back inside’ in last night’s episode of Channel 4’s Life After Lock-Up documentary.

Rhys, 20, from Portland, was released from prison having spent 34 of the past 38 months behind bars for drug offences, assaults and other crimes.

But it wasn’t long before his mum Joy kicked him out of the family home after being threatened by drug dealers, who warned they’d set her family’s home on fire if she didn’t find the cash to pay off his debts.

‘It broke my heart all over again…is it wrong for me to say I hope he goes back inside?’ she said in the eye-opening episode, after being given just five hours to get all of the money together.

Despite feeling guilty about her comment and actions, viewers were fully behind her tough decision and insisted Rhys needs to ‘grow up.’

‘Desperation. When a mum kicks out her own son. Drugs and their devastating effect,’ wrote one, while another penned: ‘Rhys’ mum is only doing what any mum does – protect your kids. You can dislike them, but you never stop loving them.’ 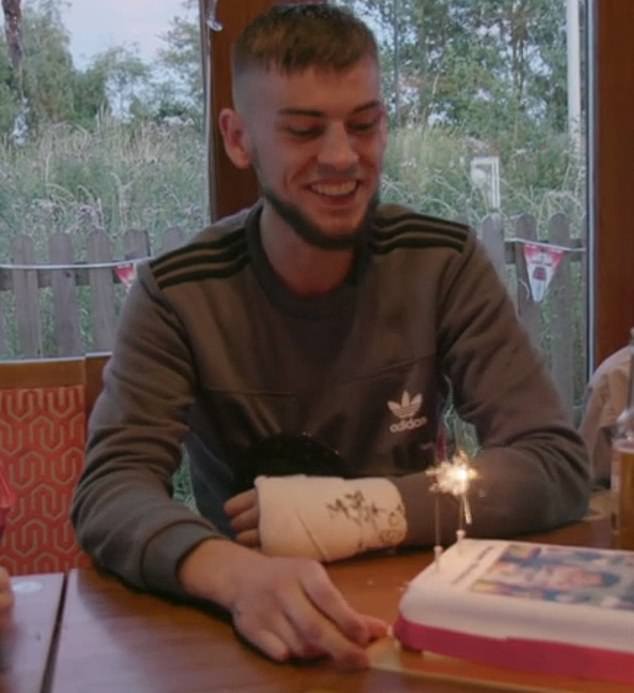 Rhys (pictured) from Portland who spent time in a Young Offenders Institution, was made to return to prison for dealing drugs just 18 days after his 21st birthday 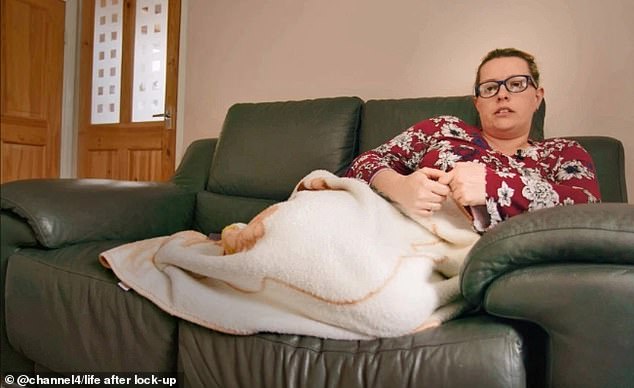 In the show, Tracey admitted: ‘It broke my heart all over again…is it wrong for me to say I hope he goes back inside?’

Despite feeling guilty about her comment and actions, viewers were fully behind her tough decision and insisted Rhys needs to ‘grow up’

Another wrote: ‘Rhys couldn’t do it. Feel for his mother,’ while a further commented: ‘Rhys was doing well. Don’t feel guilty, sometimes it’s either you take drastic actions or you will go down.’

Joy, who also has a young daughter, explained on the show: ‘It got to the stage where we were threatened by the drug dealers that they were going to set our house on fire, shoot us, hurt us. And they gave me five hours to get the money up together and pay them off.’

During the episode, Rhys moved in with a woman named Shanley and her two children. ‘He’s gone from being this criminal to basically being a step dad,’ she said.

He also narrowly avoided prison and was able to spend his 21st birthday with his family – the first in four years he’s spent out of prison.

‘Now I’m 21, I’m an adult now,’ he explained. ‘I’ve got a family, my new little family, with two little ones. Love keeps a person going. It keeps me going.’ 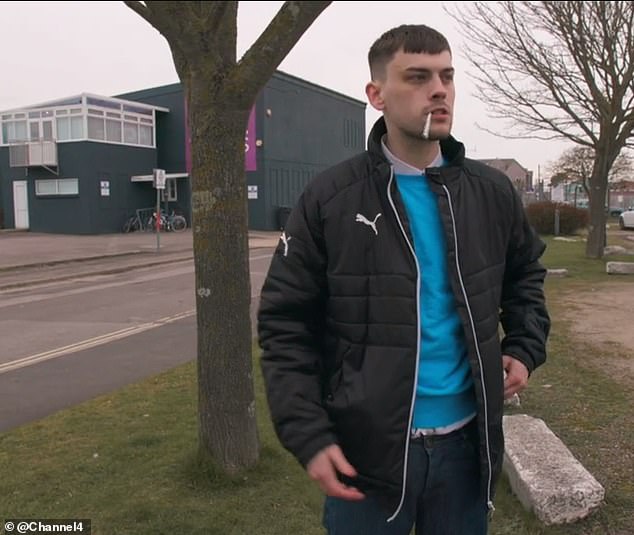 Rhys (above) caused a mixed reaction on social media lats night. With some feeling sorry for him and others blaming him for being selfish 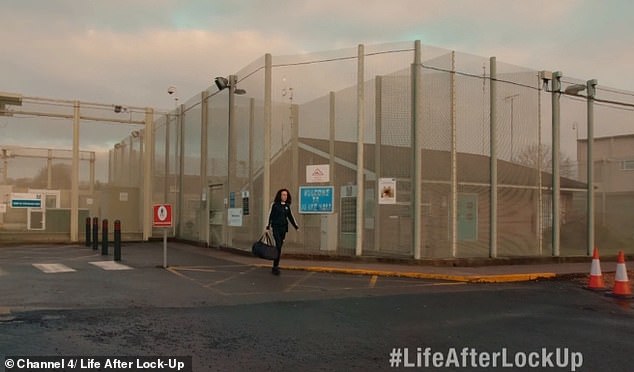 Tracey, 38, (pictured) who was jailed for stealing handbags to support her drug habit was introduced in Monday night’s episode of Life after lock-up

But just 18 days later, it’s revealed that Rhys was sent back for dealing drugs and although upset, his mum said: ‘It just goes to show you can’t change people.’

Rhys was sentenced to eight months and returned to prison after 240 days of freedom. But while many slammed the criminal’s behaviour, others expressed sympathy for him.

‘Rhys has found someone else to manipulate instead of mummy,’ wrote one, while a second said: ‘Seen this all far too many times. Hope Rhys does some thinking and gets his head sorted.’

A third commented: ‘Rhys, be a man and stop letting your mummy ruin you. Forgive her and live your life.’

While many slammed the criminal’s behaviour others expressed sympathy for him. ‘Seen this all far too many times,’ wrote one. ‘Hope Rhys does some thinking and gets his head sorted’

The episode focused on the lives of five out of eight convicted criminals after they were released from prison.

Tracey, 38, was jailed for eight months after stealing handbags to support her drug habit.

She admitted that she struggles with a drug addiction and is eventually kicked out of her friend’s house after she’s caught using. After getting through to a charity, she’s given a room for the night.

‘When I was a kid I heard of addicts, and I was like, I’ll never be like that. That won’t be me and it’s become me. It’s become who I am. Defined who I am. My life is one big regret.’

A few weeks later, Tracey is arrested for breaching the terms of her probation licence. She returned to prison for another 10 months. 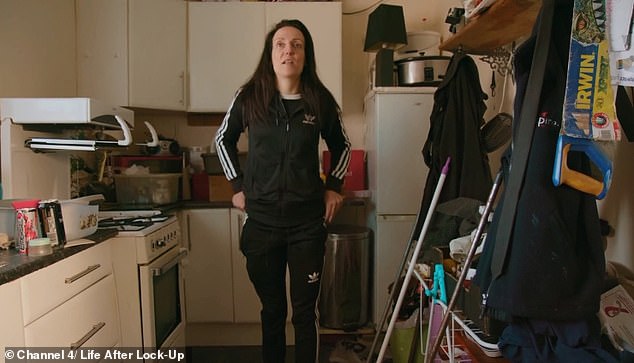 The Channel 4 series documents the lives of criminals within Britain who have a history of involvement with drugs, such as Tracey (pictured) who was kicked out of her friend’s house for using drugs 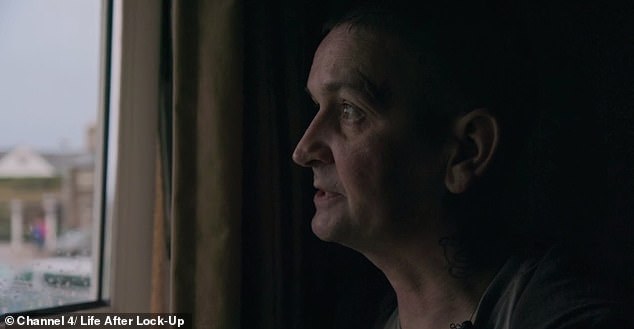 Jason, 46, (pictured) confessed he prefer sbeing in jail as he has no family or friends. He has been in and out of prison since age 13

Meanwhile, Jason, 46, revealed he had been in and out of prison since he was 13 – and has a history of severe depression.

On the day of his release, he stayed in a hotel that the local council had paid for. He admitted that he had no family or friends and actually preferred being in jail.

‘Out there to me is worse than jail,’ he said. ‘I don’t understand the rules out there, in jail I do.’

During the documentary, Jason explained he’d struggled with a drug addiction after a horrible childhood – and he arranged to meet a drug dealer after two days out of prison.

‘Heroin is the only thing I have left to keep me company,’ he said. ‘It stops me feeling lonely – makes me feel a part of something.’

He explained he’d lost his younger brother when he was eight-years-old and his dad made him believe it was his fault.

‘He put me in a children’s home,’ he said. ‘I stabbed him in the head first.’ 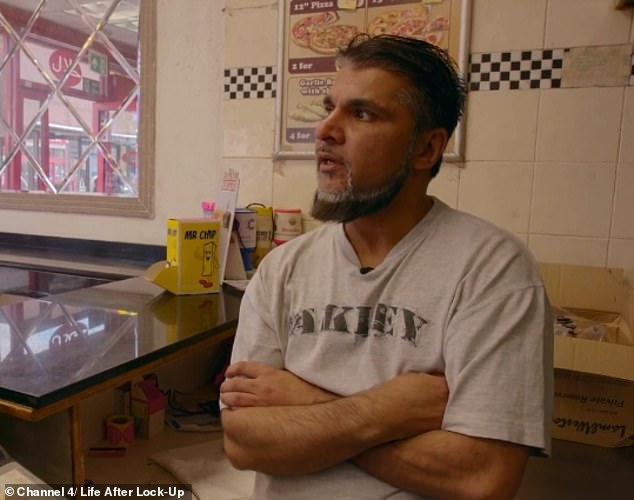 Azhar (pictured) who appeared in the first episode of Life After Lock-Up, turned back to fighting and drug dealing after he realised he won’t make quick money working in a restaurant

The episode also caught up on the lives of Gemma and Azhar from last week’s episode. Gemma’s addiction continued to spiral out of control after she spent £80 on drugs.

Azhar was released after three-and-a-half days in prison and desperate to prove to his family he’d changed, he started working in a takeaway shop.

He admitted that he doesn’t like to fail and wants to make the money so he can buy his son presents.

But after realising that he won’t make quick cash from working in a restaurant, he resorted back to fighting and drug dealing to make money.

Azhar moved back in with his parents but his dad took out a restraining order, forbidding him from visiting the family home. But after breaking the term, he was arrested and subsequently found guilty of two burglaries. He returned to prison after 349 days of freedom.