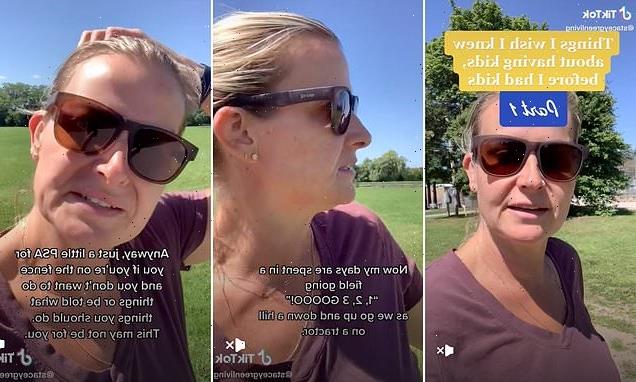 What NOBODY tells you about being a parent: Mother-of-two goes viral with videos detailing ‘tedious’ days you have to fill with activities, always having a messy house and never sleeping with ‘complete ease’

Despite parents often sugar coating the experience of bringing up children, one mother-of-two decided the truth needed to be spoken.

Stacey Green, a Canadian blogger, recently took to TikTok to reveal what she wished she’d known before embarking on parenthood.

The Toronto nutritionist titled the video ‘nobody told me,’ and starting off by saying, ‘You have to do things for them, like all the time. Like, fill the day with things to do for them.’

While she walked, she continued the lighthearted video while talking about how her Saturdays used to be filled by watching TV, going to a cottage or, as she jokingly added, hanging out with ‘Mary and Jane.’ 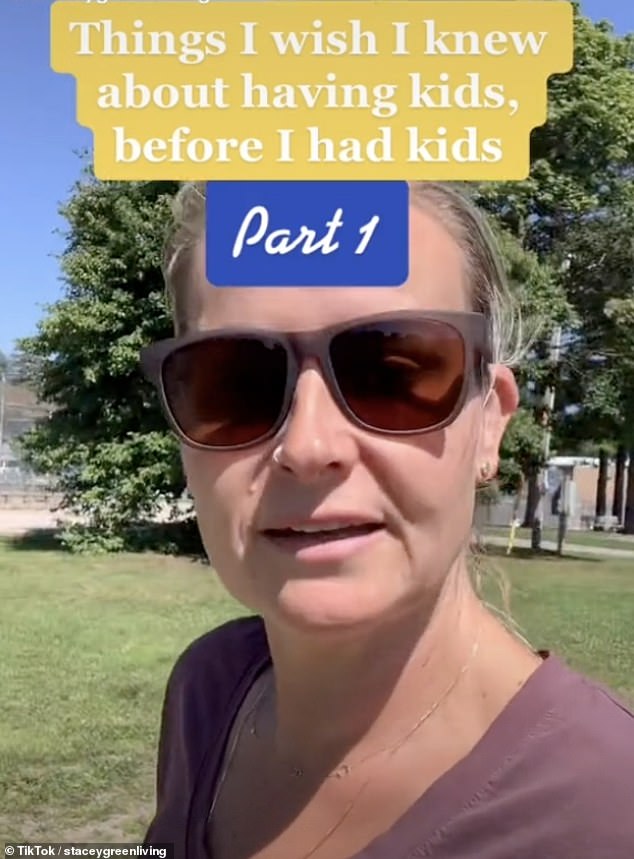 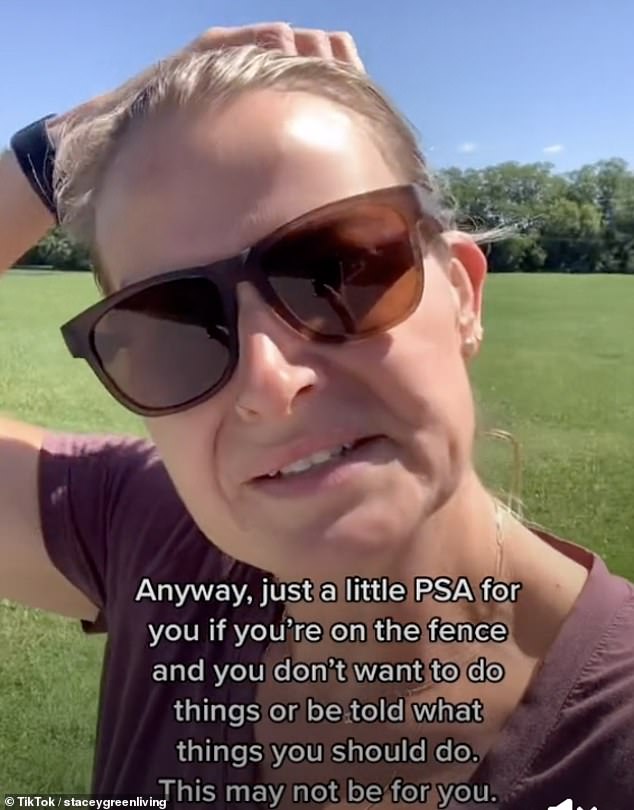 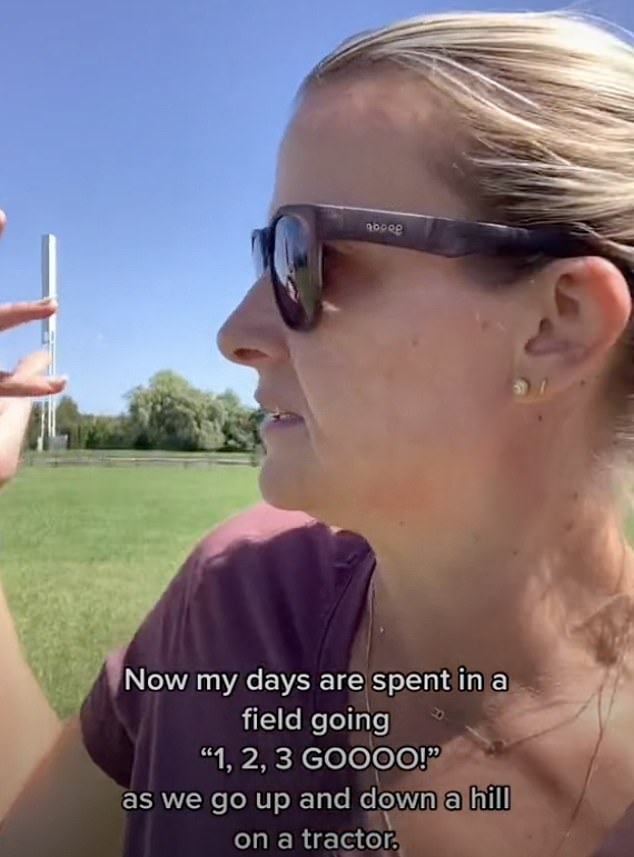 Stacey joked about the monotony of spending her day in a field playing games with her children, when she used to socialise on the weekend

The creator went on to admit that she knew what it would be like, but that she ‘didn’t understand the tedium of it all’.

Stacey, who runs a nutrition site, went on to warn off would-be parents from rushing in if they are harbouring any doubts.

‘Just a little PSA for you if you’re on the fence and you don’t want to do things or be told things you should do. ‘This may not be for you,’ she said. 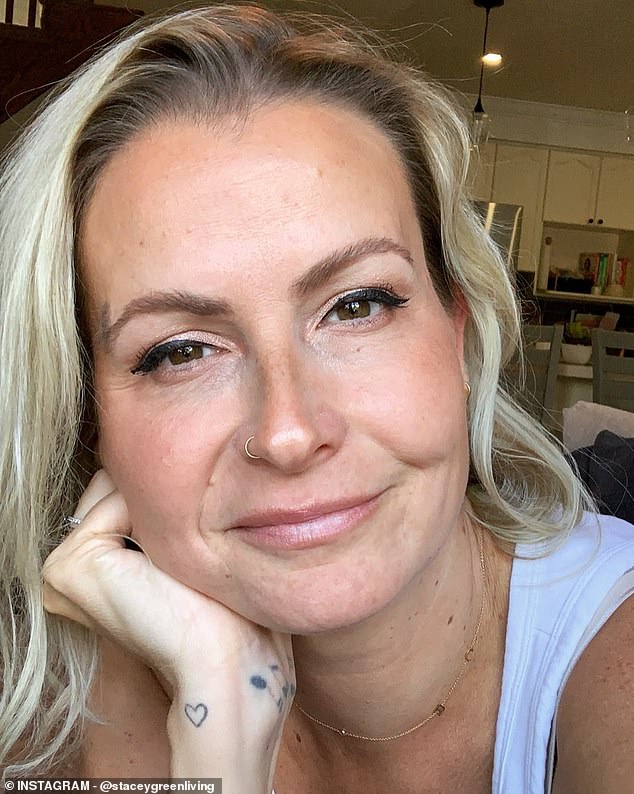 Stacey, who runs a nutrition site, went on to warned would-be parents from rushing in if they were harbouring any doubts

To prove her point, she’s seen chatting to her child at the end of the video who babbles to her at which she responds, ‘oh that’s a big rock’ in a cooing voice while signalling cutting her throat.

Since the viral video and receiving positive feedback from followers who relate to her tribulations, Stacey has gone on to create three more parts to the series, dealing with issues such as unwanted advice.

‘Everybody will have an opinion on how you’re raising your kids, and you know what? They can think whatever they want because the only opinion that matters is yours,’ she explained.

And it’s bad news for anyone who hopes that broken sleep ends once your offspring is past the baby stage.

In another warning, she told parents: ‘You’re never going to just run in anywhere, ever again. My three year old comes everywhere with me because he has to.’

And to conclude the series, she said: ‘I need you to know, and really surrender to the fact that, if your children are home and awake, your house is not going to be clean.’

One commenter said: ‘You forgot to add that they won’t appreciate any of it and will be 100% always be bored.’

Another agreed with the sentiment saying: ‘When you’ve been playing Rapunzel for the last four hours but it’s only been 27 minutes.’

A third chimed in with, ‘The only reason for having a second child was so that I will not have to play with my first.’

Others though, took the message to heart.

‘I disagree,’ said one. ‘We homeschool and spend a ton of time with our kids and it’s not our responsibility as parents to constantly stimulate our kids.’

Another wrote: ‘Why do parents always act like they didn’t realise they have to parent?’