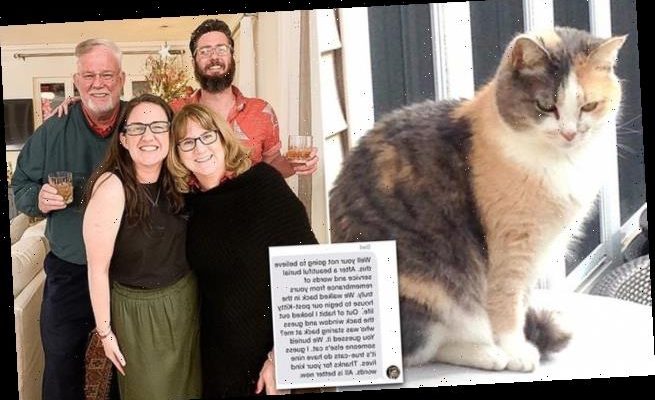 A mother was left red-faced after holding a back garden funeral for her dead cat, only to discover she had buried someone else’s pat rabbit – and her feline was feeling fine.

Cheryl Schmidt, 63, from Indiana, thought she had found her beloved seven-year-old cat Kitty, dead on the side of the road.

After discovering the dead animal, and believing it to be her pet, Cheryl held a burial service in her garden, during which her husband delivered some parting words. 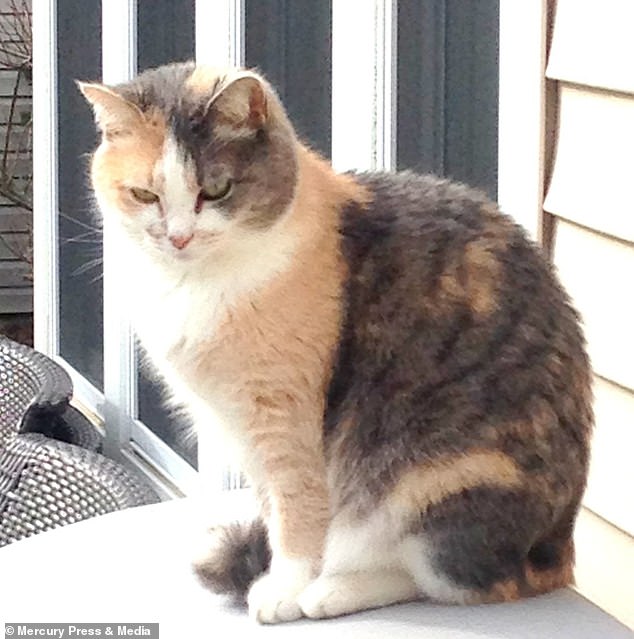 Cheryl Schmidt, 63, from Indiana, thought she had discovered her beloved cat Kitty (pictured) dead by the side of the road 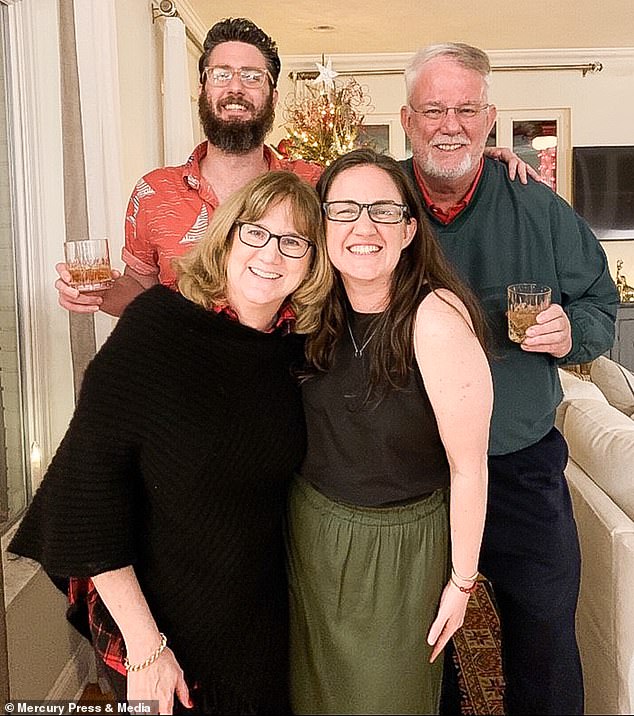 The family were left confused when, after returning inside their house, the saw Kitty staring in at them through the window.

With their own pet very much alive, the family dug the other animal back up and took it to the vet to try and discover who its owner was.

It was only at that point the family were made aware that the dead cat was in fact a dead rabbit which had been hit and killed by a car.

Cheryl later buried the rabbit in her garden once again to put it to rest. 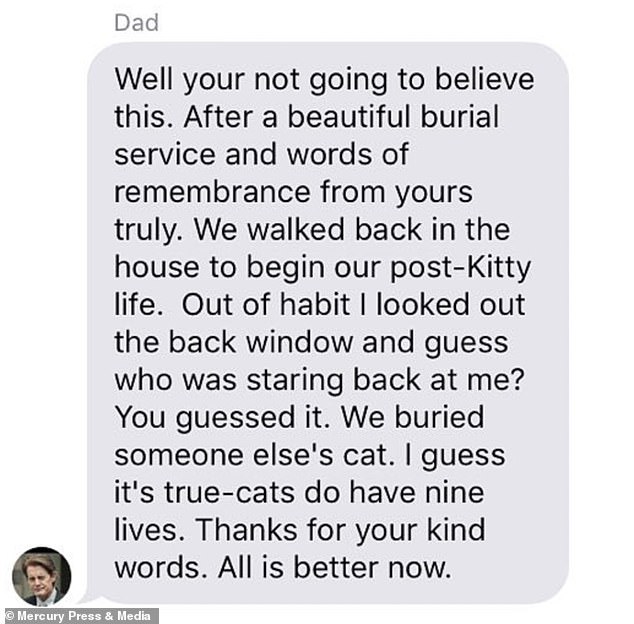 Steve told son Eric and daughter Katie about their mother’s comical mistake over text message. He explained how after the burial ceremony, Kitty appeared in their garden, staring through the window at them 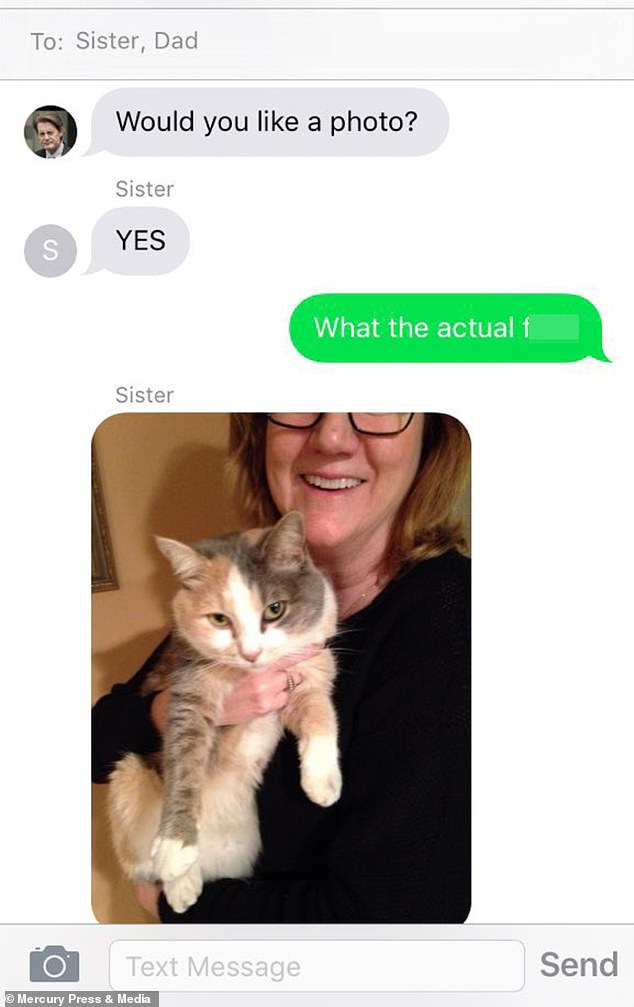 Photo evidence: Seven-year-old Kitty is pictured alive and well in Cheryl’s arms after having been thought to be dead

Despite Cheryl’s emotional rollercoaster, her husband Steve, 63, and her children Eric, 35, and Katie, 31, couldn’t help but see the funny side.

‘It was quite a ceremonial service for the cat.

‘She had to borrow a shovel from someone in the neighborhood and she was crying as she shoveled a random rabbit into the hole. 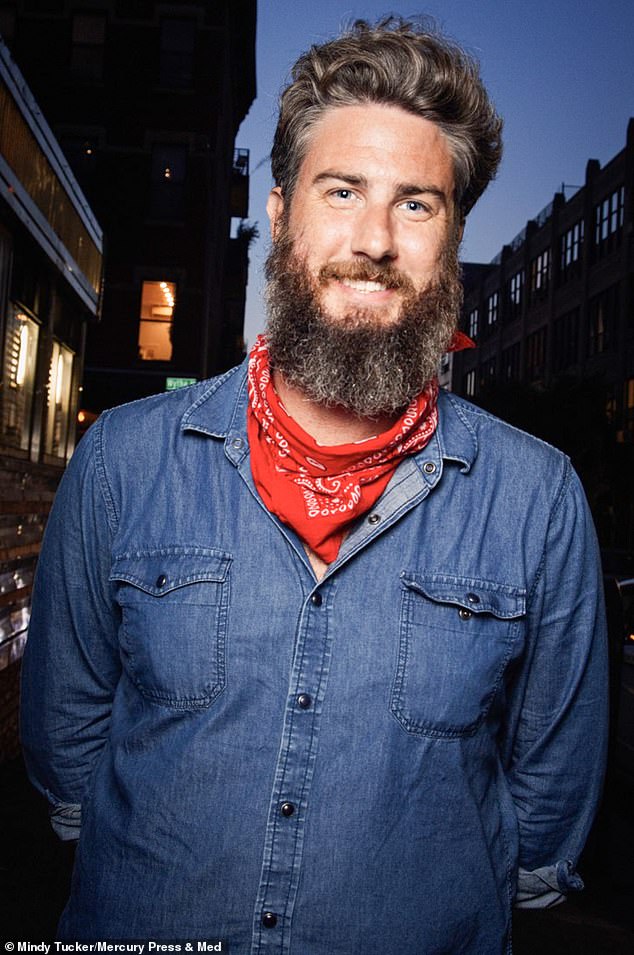 Eric (pictured), who works as a voiceover actor, said that his mother had even gone to the trouble of borrowing a spade from a neighbor to bury the rabbit – which she had believed was her cat

‘The vet offered to cremate the rabbit for my mum, but she said she already had a hole in the back garden so buried it again.’

Eric had been made aware of his mother’s comical mistake after his father texted him that their cat had gone missing.

‘Then he text us saying she’d found the cat dead at the end of the road and it had been run over.

‘She put it in a plastic bag so she didn’t have to look at it. She wishes she’d given it a better look before she did that. 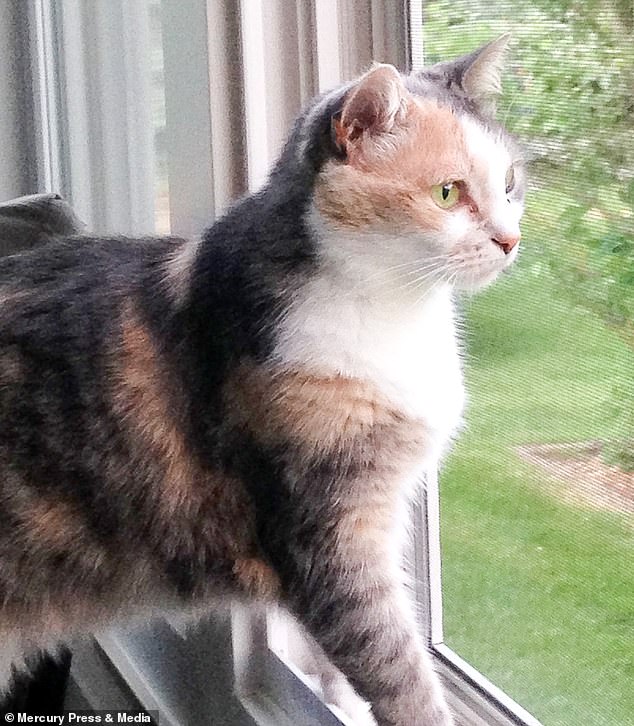 Eric and Katie had initially been told the Kitty had gone missing from the family home, before Cheryl thought she had found the missing cat by the side of the road

‘She was pretty upset so my sister called to console her.

Eric said his mother’s mistake was understandable given the fact the rabbit had been flattened by the vehicle which hit it.

‘My mum asked me not to tell anyone, but I’d already screenshotted the messages and put them on Twitter.

‘It blew up and it was so unexpected.

‘It’s so funny because people think it’s fake. We’d need to hire a forensic detective and dig it back up.’

Eric’s Twitter post was originally shared last week and has since been liked almost 794,000 times and has been retweeted more than 102,000 times. 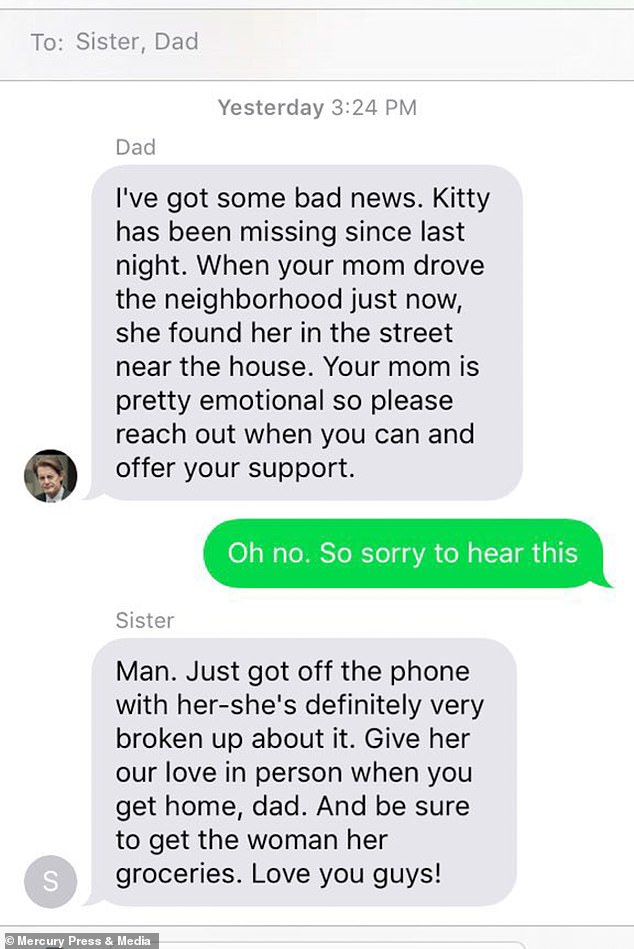 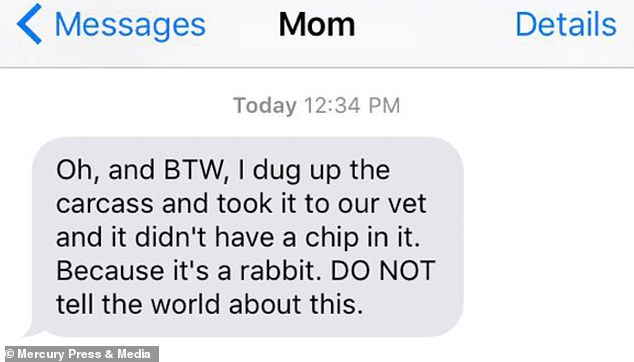 After digging the animal back up and taking it to a vet, the family learned that Cheryl had actually found a dead rabbit. She took the body home and buried it again afterwards