Prime Minister Scott Morrison says he has no doubt Christian Porter would co-operate if the South Australian coroner decides to hold an inquest into the death of a woman who made an historical rape allegation against the Attorney-General.

Mr Porter has denied the woman’s claim he raped her in 1988 at a school debating event they attended as teenagers. 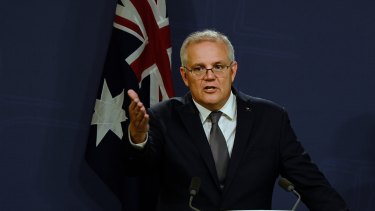 PM Scott Morrison says the decision whether to hold an inquest is entirely one for the coroner and it would be “highly inappropriate” for any politician to interfere.Credit:Kate Geraghty

But long-time friends of the woman, who took her own life last year, are standing by their belief in the truth of her account, based on her demeanour when describing her claims in 2019. They have backed calls for an inquiry into the allegation from independent MPs and the Greens.

Lawyers for the woman’s family said on Thursday the family was “supportive of any inquiry which would potentially shed light on the circumstances surrounding the deceased’s passing”.

Earlier in the week, South Australian coroner David Whittle said he regarded that state’s police investigation into the matter as incomplete, particularly in light of information revealed in media reports over the past week, and was yet to decide whether to hold an inquest. He offered no update on Friday.

Mr Morrison on Friday said that decision was entirely one for the coroner and it would be “highly inappropriate” for any politician to interfere.

“If they chose to go ahead with that then, of course, I would welcome that,” he said.

Asked whether Mr Porter should be given the opportunity to give evidence or defend his good name, the Prime Minister again said that would be up to the coroner.

“The coronial inquiry would be into the rather terrible events with the death by suicide of the woman at the centre of this. And if the coroner sought that, then I have no doubt that the Attorney-General would co-operate with any coronial process,” he said.

The woman raised the allegation with NSW Police in February 2020 and had contact with investigators over three months but did not make a formal statement.

In June 2020, two days before her death, she emailed detectives to say she could no longer proceed with the complaint for “medical and personal reasons”, NSW Police said in a statement this week. Its investigation is now closed.

Mr Morrison insisted there was “no alternative process” to that police investigation.

“Given that process has concluded, the presumption of innocence stands. And so we should be able to move on from that,” he said.

Mr Porter emphatically denied the accusation on Wednesday, saying “it just did not happen” and arguing an independent investigation would require him to prove a negative.

He said no one had ever put to him “in any substantive form … the details of what appears is now being alleged against me”.

NSW Police said it would not be usual procedure to provide a version of an allegation to a suspect before the alleged victim had made a formal complaint.