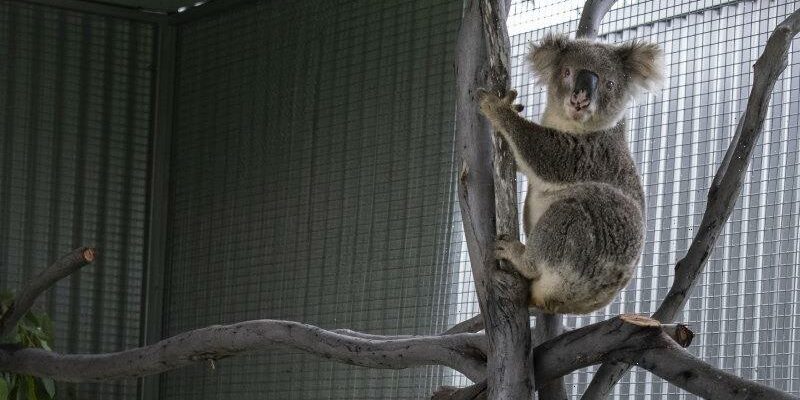 Among the fields of Western Sydney University’s Richmond campus lie four enclosures that will house injured koalas as they undergo rehabilitation before their release. The first koala to be welcomed into the centre, Monty, has chlamydia and is blind in one eye. While it’s uncertain whether he will regain his sight, his diligent team of caretakers remain hopeful.

Monty’s primary carer for the past six weeks has been WIRES volunteer Morgan Philpott, who helped his furry friend get acquainted with his new surroundings on Friday. Mr Philpott will visit the centre twice a day to feed and check on Monty as the marsupial undergoes a course of intensive antibiotics. 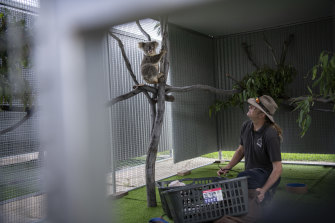 “I’ve just started my seventh year [as a WIRES volunteer], so I am a beginner, there’s a lot to learn,” Mr Philpott said.

He’s looked after dozens of koalas during that time and said feeding and caring for the fluffy marsupials is a full-time job. He also works full-time as a neonatal care nurse. One of the biggest challenges is finding the right type of leaves for the koalas and Mr Philpott often covers kilometres to hunt for the right ones. 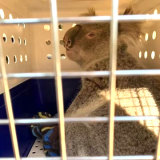 Monty the koala was found in the Upper Colo region at the base of a tree in September.Credit:

He said releasing an animal back into the wild was the highlight of what he did and he found moving Monty into the new facility akin to watching a child take its first step.

“It’s a huge amount of work, but you take a moment to reflect and catch your breath before the next one comes in.”

Vet Luke Smith said koalas of the same region were often injured in similar ways. The most common reason koalas in the Hawkesbury region needed aid was for chlamydia, but car strikes could be more common in other areas.

Funding for the new rehabilitation facility came from the Australian Community, a charity by ex-pats in America. President and founder James Boland said the horrific images of animals killed or injured during the Black Summer bushfires spurred the group to act. They raised more than $510,800 for Australian organisations including the NSW Rural Fire Service, BlazeAid and WIRES.

“It feels great to have something permanent like the enclosures – it’s something tangible that the money went to build,” Mr Boland said. “Part of our process is to do a site visit to see where the money has been donated and report that back.

“The pandemic has not made that possible, but we’re definitely committed to visiting all the centres where we donated money and seeing where the money went.” 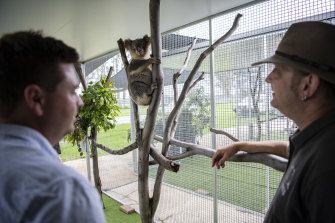 Wires volunteer Morgan Phillpot (right) and Veterinarian Luke Smith will visit Monty regularly to check how he is recovering.Credit:Wolter Peeters

WIRES chief executive Leanne Taylor said summer was one of the busiest times of the year for the animal rescue group, with more people travelling on roads, and she urged motorists to slow down and be aware of their surroundings.

She added that each year more and more animals needed assistance, with natural disasters such as droughts or bushfires exacerbating that need.

“[The facility is] built with future disasters in mind,” she said. “That’s our challenge with climate change, urban development, predators and disease – it’s all added pressures on wildlife.”