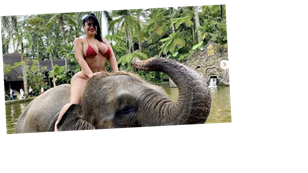 Model Lissa Aires has caused controversy as an unearthed snap of her emerged.

The brunette stunner, who claims to have the biggest butt on OnlyFans, has received criticism online as she rode an elephant at a park in Bali.

The pictures, that were taken back in February last year, saw Lissa smiling happily as she sat on top of the animal.

She was also seen stroking the mammal as she crouched down next to it.

Despite some fans loving her photos, others hit out at her.

One exclaimed: "Leave the elephant be."

While another added: "I expected better from you."

Hitting back at the controversy, Lissa said: "I was traveling on vacation when I had the opportunity to take a picture with the elephant.

She added: "Too bad people just scolded me. I find it a form of prejudice because of my photos.

"There are several other people taking pictures with them just like me and I didn't see this controversy."

Kim Kardashian also received backlash for posing at the park – which is the Mason Elephant Park & Lodge in Bali – back in 2019.

Lissa is usually known for causing a stir with her bombshell curves.

The London-based beauty c laims to have spent over £40,000 on her all-body transformation.

Her main focus was to achieve the "biggest butt" on OnlyFans, something she claims to have accomplished.

She said: "I want to have the best shape to take the photos, so I invested heavily.

"I always had curves, but I also always wanted to have the biggest bum.

"So I took the opportunity to remove all the fat from other parts of the body to put it where I really wanted."

Lissa is certainly earning enough on OnlyFans – reaching her first million in August last year on the subscription-based site.

She has used her earnings so far to buy a property in Miami.