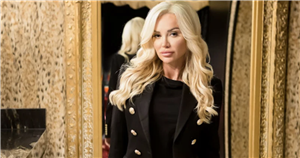 Amy Gwynn is probably not what you imagine your typical strip club owner to look like.

Many are still stuck in the perception that the industry is seedy and ran by rich men in suits.

However, Amy, 33, is hoping to change that view with her "empowering" club Rude.

The mum has run the Liverpool-based club for 11 years, and she says it's only getting better, with the club now going stronger than ever.

And a big part of that, Amy says, is the "sisterhood" atmosphere which she has installed in the club.

Talking exclusively to Daily Star, Amy said: "Many clubs are still stuck in the eighties.

"They don't have changing rooms and the girls have to get dressed in the toilets where the customers go.

"However, that's completely different at Rude.

"We have somewhere where they can change, a huge stage which we do shows from and have a real sisterhood vibe."

Asked how she thinks being a female boss is preferable to male-run strip clubs, Amy says that the girls feel a lot more ease with her.

She told us: "New girls are often nervous, but I'm very open and they know they can talk about anything with me – we're all in it together.

"They often feel a lot more comfortable with a female boss as it takes the seedy side away from it.

"I'm with them through auditions, trial shifts and I dress them, so it can be very daunting otherwise.

"The girls who have worked in the industry a long time also appreciate how different we are to the other clubs."

Amy used to be in the modelling industry and was also training to be an accountant.

She admits she "fell into" running the strip club as her husband worked as a DJ on the club scene and she had a lot of contacts in the industry.

"It just kind of happened," she admits.

"It seems like a blur when I look back at starting the club.

"I was going to go back accountancy, but I realised with the club I could combine the two and use my accountancy skills but in something fun. It was the best of both worlds.

"I've been doing it for 11 years now and I couldn't imagine doing anything else – it was meant to be."

Asked the worst thing about running the strip club, Amy admits it's the hours.

"I work until 6am every weekend," she says.

"I dove my job, but it does take over your life.

"I've done it since I was 22 so my whole twenties were gone really.

"You miss friends parties and family events as you've to be on the floor.

"That's the only downside really – your social life is non-existent."

However, Amy admits the money certainly makes up for it.

She says she also feels very lucky to work with such amazing girls, who often have her "crying with laughter".

Amy likes to socialise with the girls outside of work too, with them often going for meals before they start a shift.

Asked if she's ever had any backlash about running the club by other mums, Amy says that there never has been 'to her face'.

She says she used to be worried about what people thought when she was younger, but these days she doesn't care.

In fact, the businesswoman says she would "wipe the floor" with anyone that did criticise what she does as she's very passionate about her work.

Amy said she's made a real effort to be proud of the club and the industry to show her girls that they shouldn't be worried what people think.

"I practice what I preach and make sure people know I'm proud of the club," she says.

A lot of people, especially mums of the girls, are very supportive of her though as they know she is taking good care of the girls.

"I'd never allow a girl on the floor who's naive," Amy says.

"We dill them full of confidence and make sure they're safe.

"They'd never be in a position they don't want to be in." She says: "This job obviously has a short lifespan.

"So I make sure the girls have a plan.

"Whether they're doing it to may for Uni, or to buy a house, I make sure to tell them they have something to show from it."

With the adult industry booming during the pandemic, and Amy admitting that business is better than ever after the struggle of lockdown, Amy admits any naysayers better get used to their kind of business.

"It isn't going away, so we might as well do it right," she says.

Get all the biggest Lifestyle news straight to your inbox. Sign up for the free Daily Star Hot Topics newsletter