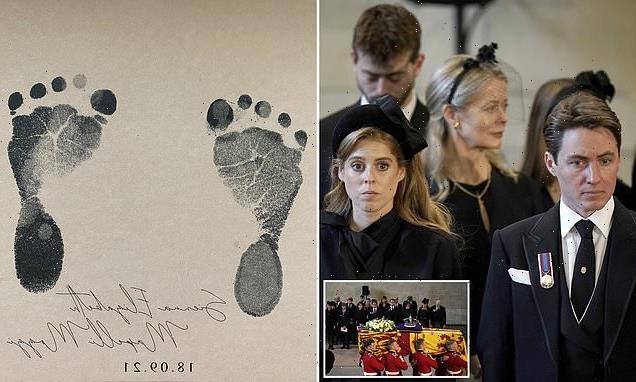 There will be mixed emotions for Princess Beatrice on her daughter’s first birthday today as she mourns the loss of her ‘grannie’ the Queen.

The princess and her husband Edoardo Mapelli Mozzi’s daughter, who has never been publicly pictured. was born at the Chelsea and Westminster Hospital in London and was named after The Queen.

Beatrice, who had a close relationship with the Queen, decided to honour her grandmother by including ‘Elizabeth’ in Sienna’s name. 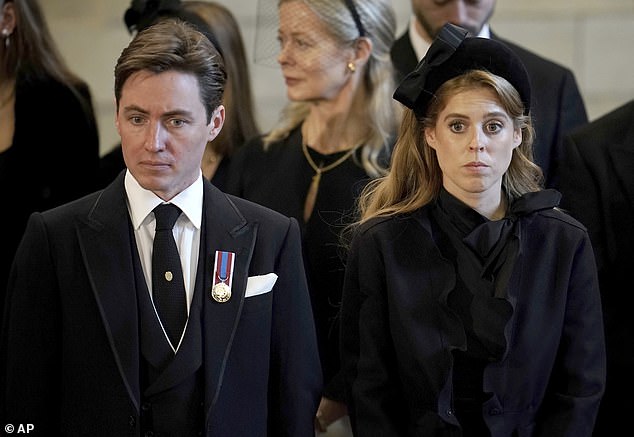 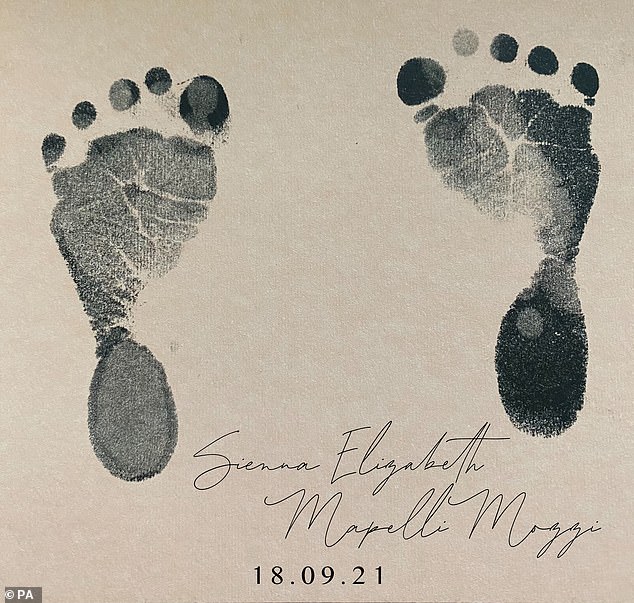 The princess and her husband Edoardo Mapelli Mozzi’s, 38, daughter was born at the Chelsea and Westminster Hospital in London and was named after The Queen

Emotions are probably running high today for the couple as they have been seen looking sombre over the last few days while attending public engagements in the wake of the Queen’s death.

On Friday, Beatrice and Edoardo joined Eugenie and her husband Jack Brooksbank, and other senior royals, to watch the Queen’s children stand vigil.

On Saturday, Beatrice and her sister Eugenie paid a personal tribute to the Queen, saying: ‘Goodbye dear Grannie, it has been the honour of our lives to have been your granddaughters and we’re so very proud of you.’

According to the royal sisters – who posted the tribute on Instagram alongside a sweet photograph of their younger selves with their grandmother – they have ‘not been able to put much into words’ since the monarch died at Balmoral on September 8, aged 96.

The Duke of York’s daughters, who are both thought to have shared a close relationship with their grandmother, thanked Her Majesty, saying she would ‘never know’ the impact she’d had on their lives. 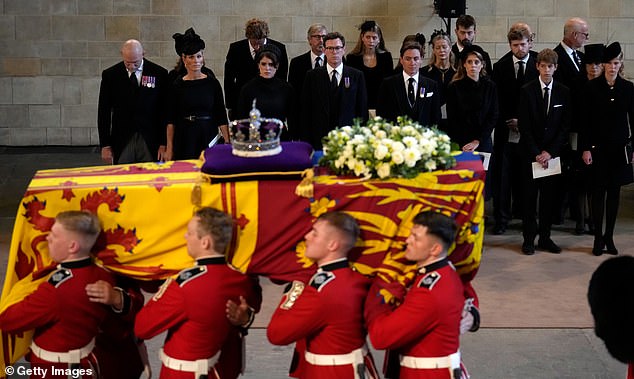 Queen Elizabeth’s granddaughter, 34, is celebrating her daughter Sienna Elizabeth Mapelli Mozzi’ birthday ahead of Her Majesty’s state funeral at Westminster Abbey on Monday

They also paid tribute to King Charles, their uncle, writing that they know he ‘will continue to lead in your example as he too has dedicated his life to service’.

In the statement, Beatrice and Eugenie said: ‘Dearest Grannie, We’ve not been able to put much into words since you left us all. There have been tears and laughter, silences and chatter, hugs and loneliness, and a collective loss for you, our beloved Queen and our beloved Grannie.

‘We, like many, thought you’d be here forever. And we all miss you terribly. You were our matriarch, our guide, our loving hand on our backs leading us through this world. You taught us so much and we will cherish those lessons and memories forever. 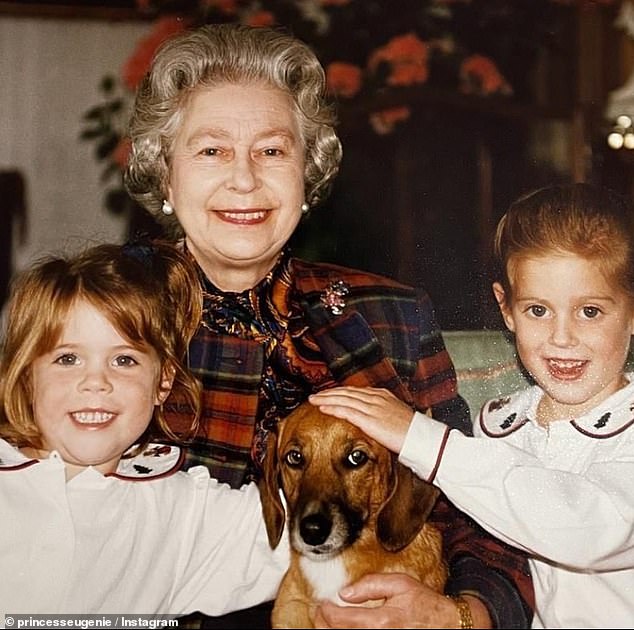 The royal sisters Beatrice and Eugenie shared a sweet image of themselves with their ‘dearest Grannie’, as they paid tribute to Her Majesty with a moving statement 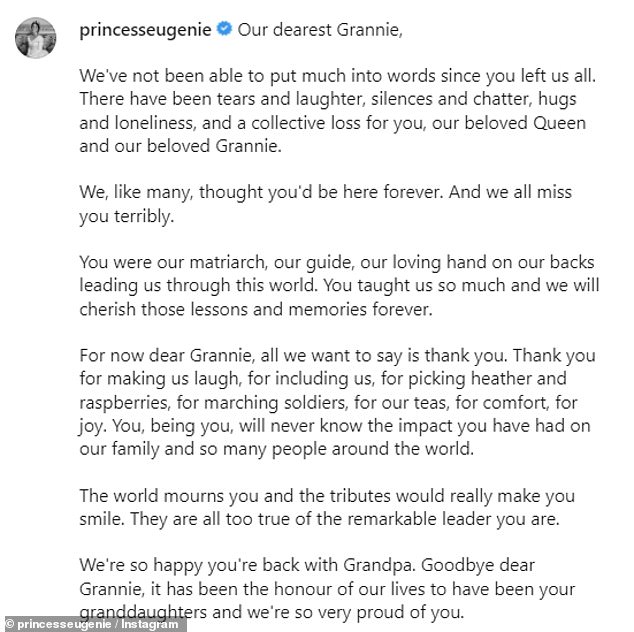 In the statement, the princesses said they’ve ‘not been able to put much into words since you left us all’

‘For now dear Grannie, all we want to say is thank you. Thank you for making us laugh, for including us, for picking heather and raspberries, for marching soldiers, for our teas, for comfort, for joy. You, being you, will never know the impact you have had on our family and so many people around the world.

‘The world mourns you and the tributes would really make you smile. They are all too true of the remarkable leader you are.

‘We’re so happy you’re back with Grandpa. Goodbye dear Grannie, it has been the honour of our lives to have been your granddaughters and we’re so very proud of you.

‘We know that dear Uncle Charles, the King, will continue to lead in your example as he too has dedicated his life to service. 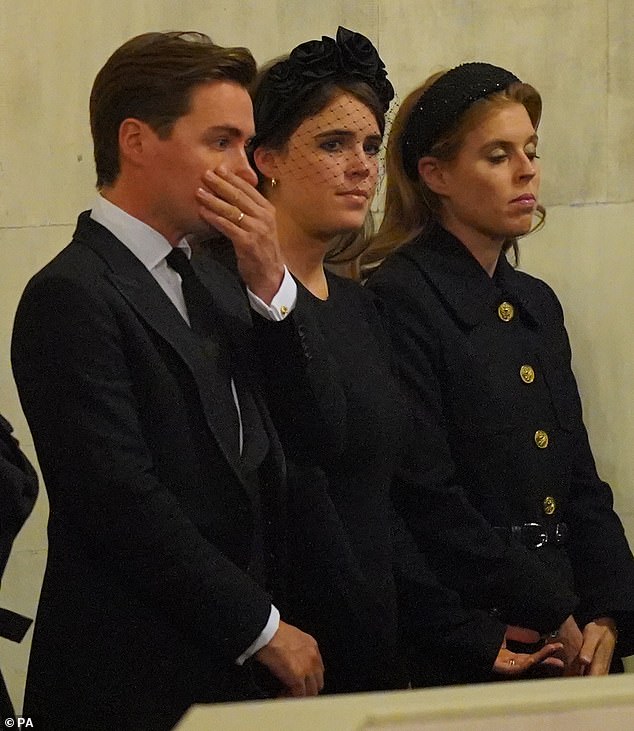 On Friday the sisters attended a vigil at Westminster Hall. Edoardo Mapelli Mozzi appeared visibly moved as he watched over the vigil next to Princess Eugenie (centre) and Princess Beatrice (right) 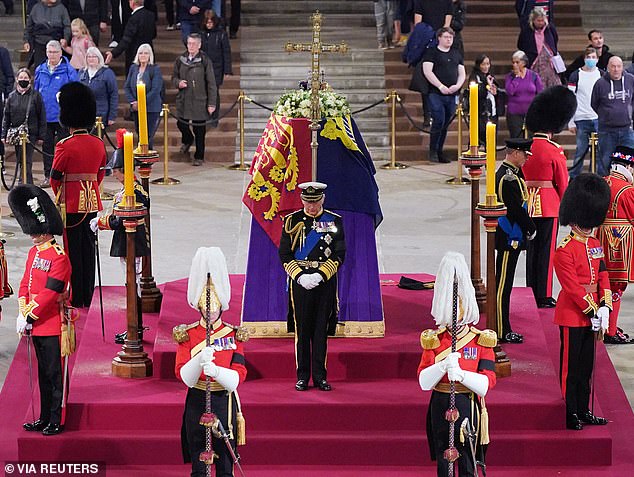 ‘God save the King. With our love, Beatrice and Eugenie.’

On Friday they attended a vigil at Westminster Hall, which saw the Queen’s children – King Charles, Princess Anne, Prince Andrew and Prince Edward – repeat the ceremonial Vigil of Princes that they first carried out at St Giles’ Cathedral in Edinburgh as the Queen lies in state.

As they stood around the casket, other members of the royal family, including Queen Consort Camilla, watched in solemn silence from the stands.

As Andrew, 62, who served in the Falklands, wore the uniform and stood around his mother’s coffin, his daughters Princess Beatrice and Princess Eugenie watched their father pay his respects.

They were joined by Beatrice’s husband, Edoardo Mapelli Mozzi who appeared visibly moved by the vigil and put his hand to his face, as if he was wiping away tears.

‘Your Majesty, Thank You’: Princess Beatrice’s brother-in-law pens a heartfelt poem paying tribute to the Queen

BY GWYNETH REES FOR MAILONLINE

Taking to Instagram, the property developer shared a heartfelt poem written by his half-brother Alby Shale in a bid to provide comfort to a grieving Princess Beatrice, who is the grandaughter of the Queen.

The lengthy poem called Her Majesty, Thank You mentions the great service of the Queen over her 70-year reign in rhyming couplets. 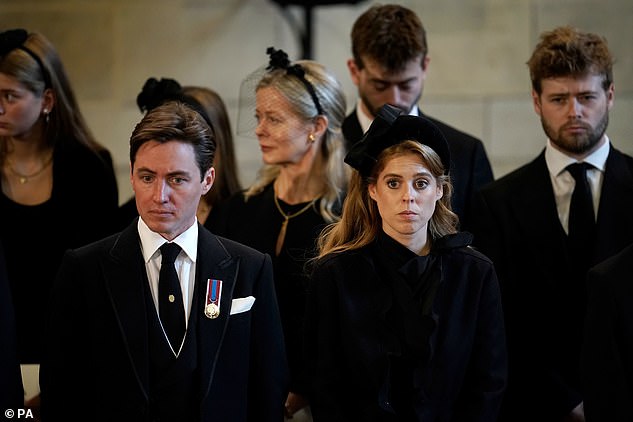 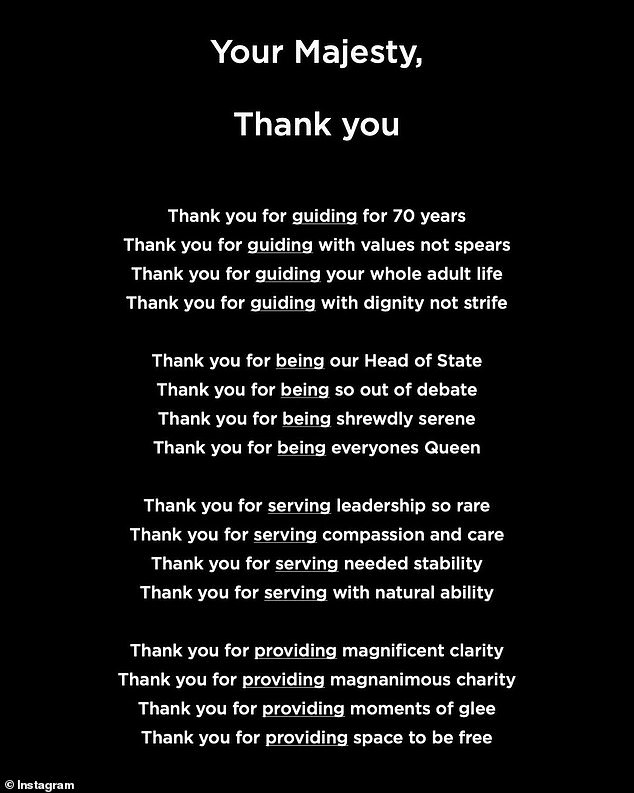 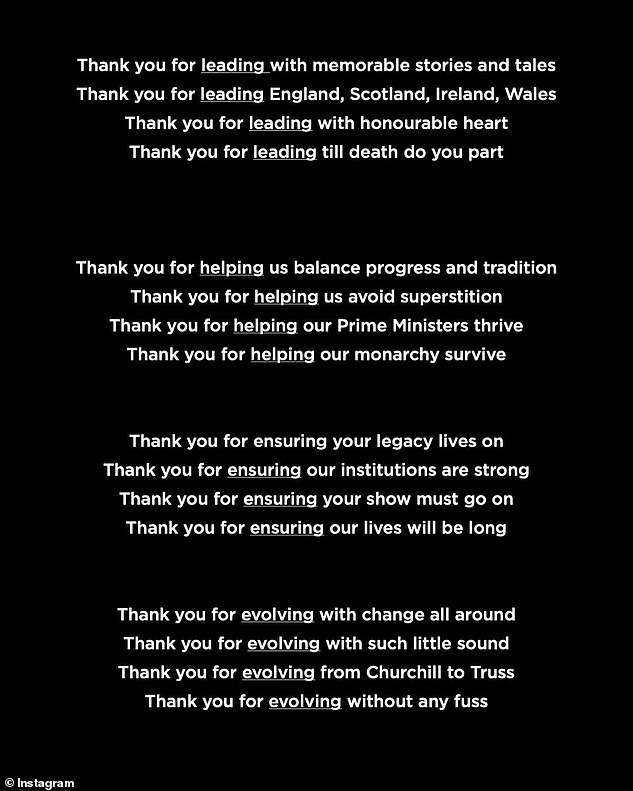 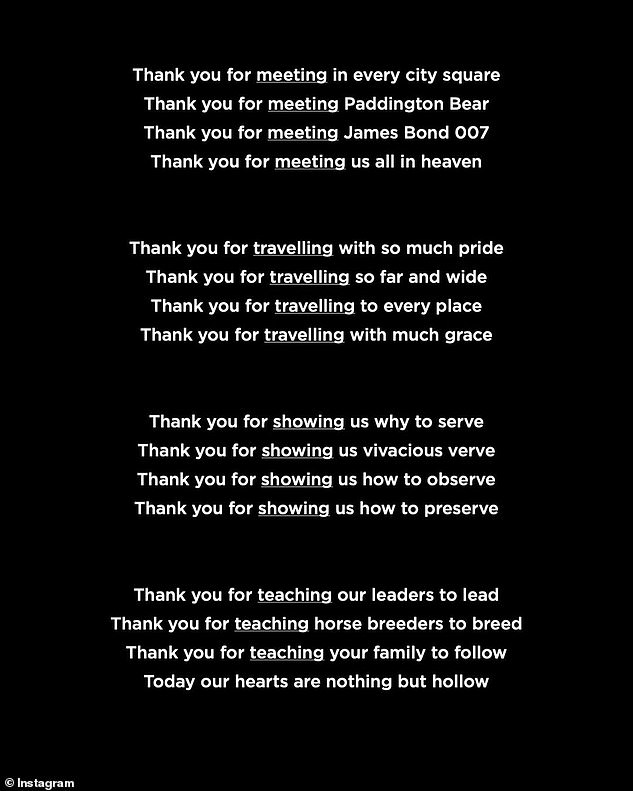 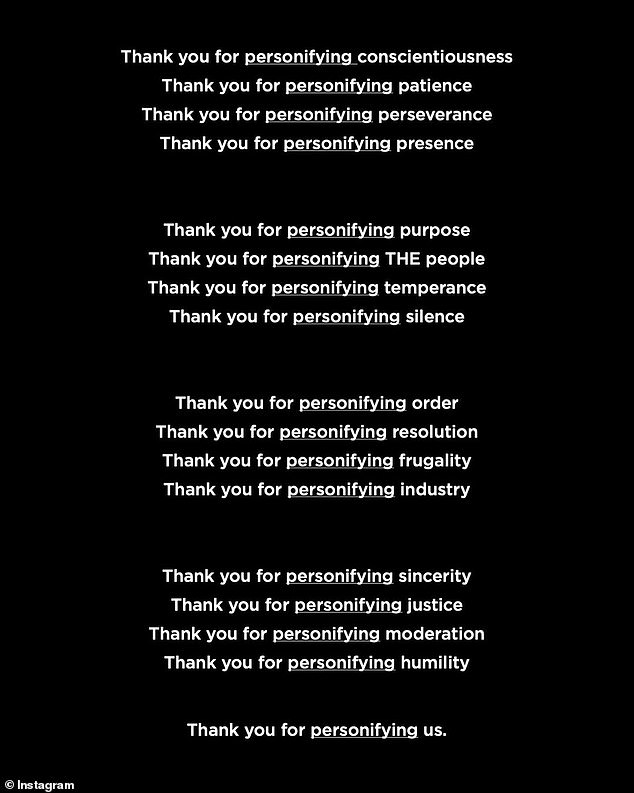 Edo, 38, who married Princess Beatrice in July 2020, was recently seen at his wife’s side at Westminster Hall, where they stood in front of her coffin to pay their respects as she lies in state.

Although Edo’s half-brother Alby Shale keeps a low profile in royal circles, he penned this poem to bring comfort to Beatrice.

With sixteen verses and one stand-alone line, it thanks the late Queen for ‘leading us till death do us part’, and for ‘leading with an honourable heart’.

Mr Mozzi accompanied the post with a message that read: ‘Your Majesty, Thank you. Thank you to my wonderful brother Alby Shale for writing this for Beatrice and thank you for allowing us to share it.’

Mr Mozzi’s Instagram followers were quick to heap praise on his brother, with one writing: ‘Such a beautiful tribute and touching.’

A second wrote: ‘This is not only incredibly well written, but it’s a photograph with words. It captures the delineation and essence of a person.’

Mr Shale, who was a senior Conservative and a close friend of David Cameron, died from heart disease at Glastonbury Festival in 2011.