Australia’s most beautiful woman Maria Thattil, 28, reveals the vile comment about her Indian heritage and 5’3” height that made her determined to prove her critics wrong

Miss Universe Australia Maria Thattil has revealed how vile racial abuse made her realise she could use her Indian immigrant heritage and diminutive height to reshape Australian society.

The 5’3″ beauty, 28, told Daily Mail Australia she has received countless comments telling her she ‘is not Australian enough’ to represent her country on the world stage.

She singled out one person who wrote on her Instagram account: ‘I miss the days when Australia would send tall, white women to Miss Universe.’ 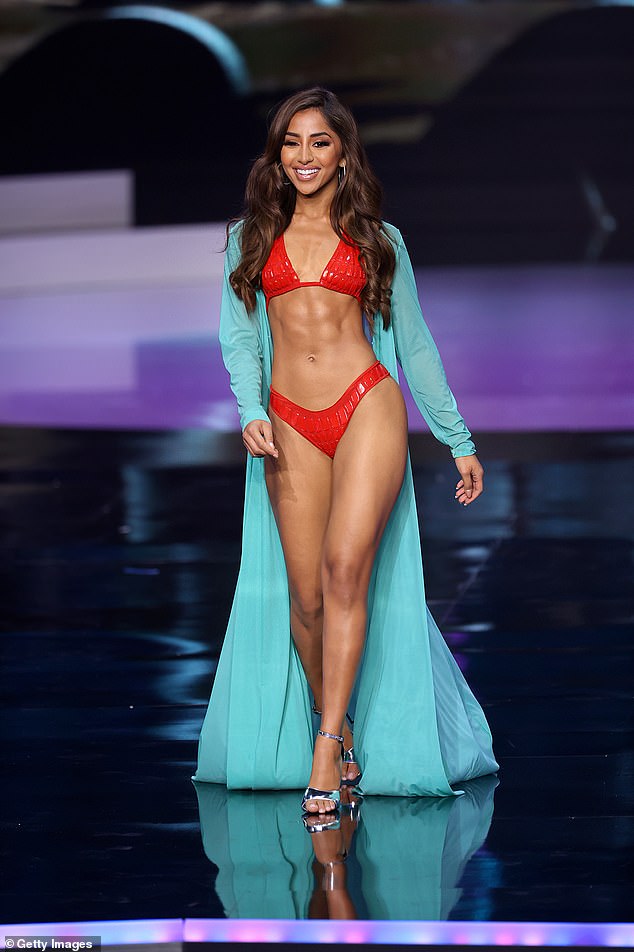 Thattil was the second consecutive woman of Indian origin to be crowned Miss Universe Australia, following Priya Serrao in 2019, and only the third woman of colour to represent Australia in the almost seven decades since Miss Universe began.

The pint-sized model is one of the shortest contestants in Miss Universe’s 69 year history, and the smallest to take the stage at Florida’s Seminole Hard Rock Hotel & Casino Hollywood for the grand finale last month.

Despite owning her height and embracing her heritage with open arms, Maria has still been subjected to ethnic slurs.

While she was initially self-conscious about applying for the pageant watched by more than 500million viewers worldwide, Maria said she soon realised she could use these differences to her advantage.

‘It was an opportunity to represent women of colour and especially women of average height in a space they are not usually seen,’ she said.

Maria’s parents moved to Melbourne from India in the early 1990s.

Her father Tony, a former Catholic priest from Kerala, left the church when he fell in love with her mother Nicky, who was born in Kolkata.

Maria grew up close with her younger brother Dominic, her ‘best friend’ and biggest support while she trained for the runway during Melbourne’s four-month lockdown during the winter of 2020.

Although she remembers religiously watching Miss Universe with her mum as a young girl, Maria never imagined herself on stage because of her height.

‘I never though that modelling was something I could do because I didn’t have the  “right look”,’ she said. 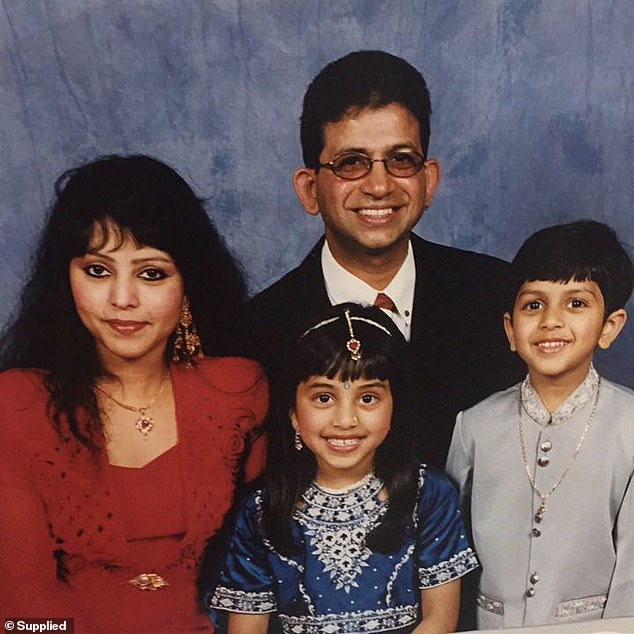 Maria as a child in Melbourne with her mother Nicky, father Tony, and brother Dominic

The multitalented beauty queen, who has a bachelor’s degree in psychology and a masters in human resources as well as a corporate job with the Victorian Government, applied after seeing Priya Serrao representing Australia in 2019.

‘She looked like me. I thought, if she can do it, maybe I can too,’ she said.

Anything but naïve, Maria applied for Miss Universe acutely aware of the vacuous and misogynistic reputation associated with beauty pageants.

‘I had concerns about going into this world, of course,’ she said.

The most pointed questions came from her government colleagues, who wondered why their razor sharp co-worker was vying to compete in a contest notorious for glorifying the female appearance.

Maria told them she intended to use her platform to do the opposite. 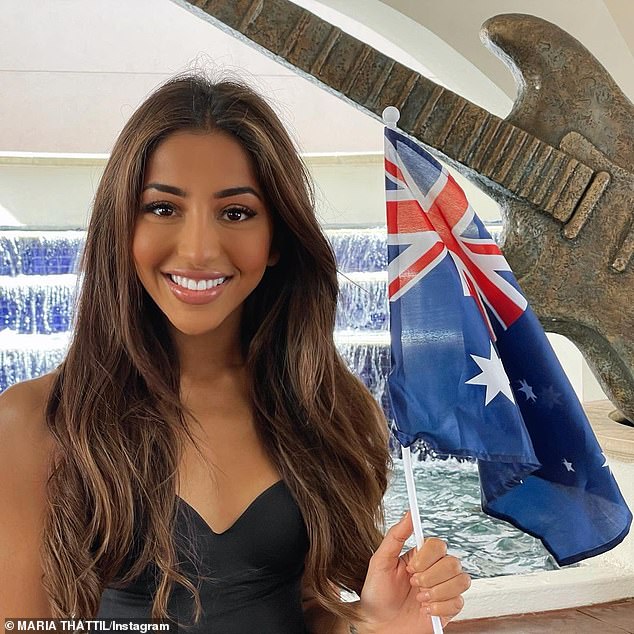 Like most second-generation migrant kids, Maria (pictured) has a strong sense of two cultural identities; she clearly cherishes them equally

‘I wanted to take something that has patriarchal roots and use it to represent people like me – children of immigrants, people from ethnic minorities, anyone who feels on the fringes of things,’ she said.

She now has 192,000 Instagram followers from all around the world who know her name and what she stands for.

Like most second-generation migrant kids, Maria has a strong sense of two cultural identities. She clearly cherishes them equally.

She believes having another Indian-Australian Miss Universe Australia is a step towards better cultural representation across the country. 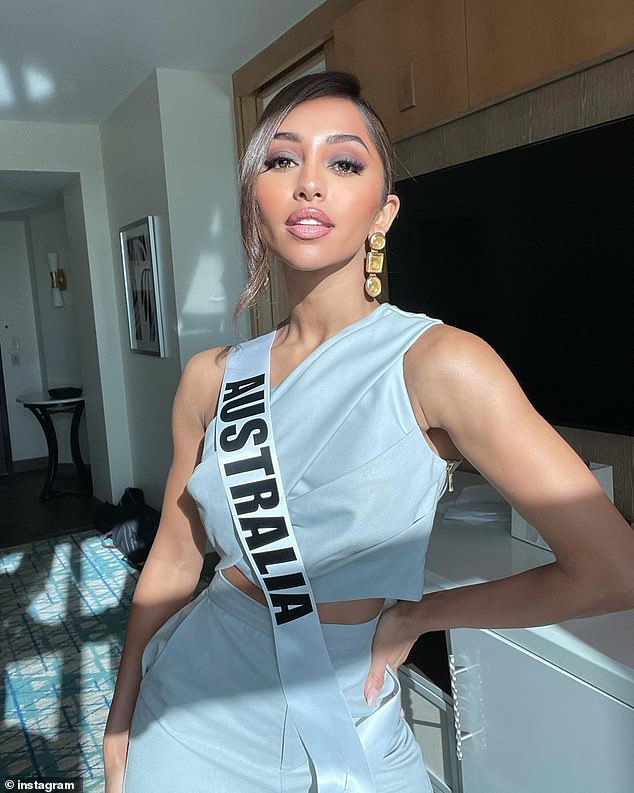 Despite owning her height and embracing her heritage, Maria (pictured) has still felt the wrath of vile internet trolls who say she is ‘not Australian enough’ to represent her country

‘We have an of opportunity to accurately represent Australia’s true identity,’ she said.

‘I wanted to use the title responsibly, to challenge incorrect perceptions of what an “Australian” actually looks like.’

While she had nothing but praise for her fellow contestants and Miss Universe organisers, Maria admitted there is ‘a way to go’ to make beauty pageants a positive and inclusive space for people of all backgrounds.

‘We need to see a lot more body inclusivity, women of different shapes and sizes,’ she said.

Maria said we need to see women of different shapes and sizes, as well as a greater number of transgender representatives.

‘Until we see that diversity visually, we have  a way to go. We need to see women who look different so that it reflects the world we live in,’ she said.

And it appears her tireless diversity-championing has already made an impact. 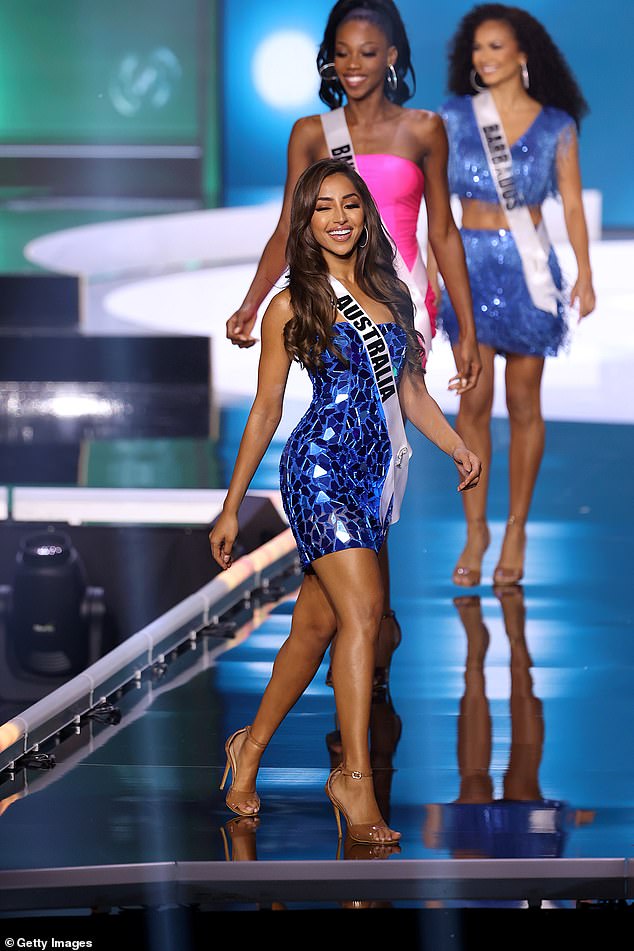 Pint-sized power: Maria wanted to represent represent women of average height in a space they are not usually seen

After the 2021 event, Miss Universe Philippines announced the removal of its minimum height requirement for applicants.

Maria was elated at the news, citing her own experience at Miss Universe Australia where she was ‘never encouraged to see [height] as a barrier’.

Asked about the backlash to Australia’s ‘whitewashed’ promotional photos for the Tokyo Olympics, Maria believes the country needs an injection of racial diversity across every industry.

‘We need to have accurate representation everywhere, not just in sports or pageants, but in news, politics, business and decision-making spheres,’ she said.

‘There is a very real cultural identity crisis for people in this country who don’t fit the typical Anglo-Australian mould.’ 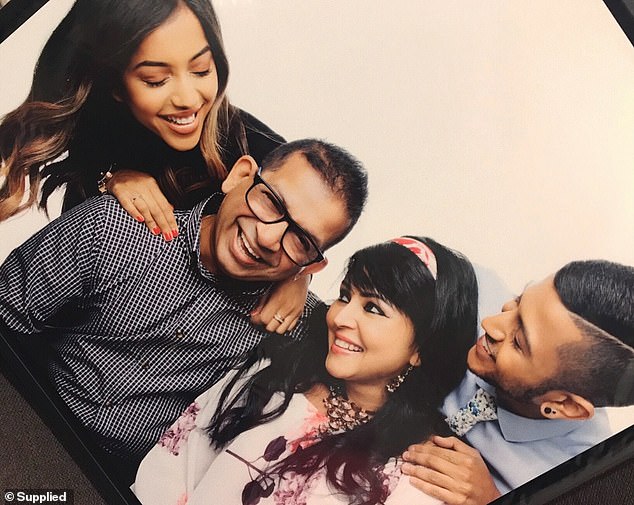 At the grand finale in Florida, Maria stunned in spectacular looks from a variety of designers, including a national costume from Asian-Australian Nicola Yeung and a show-stopping Swarovski crystal gown hand-beaded over six months by Middle Eastern-Australian, Alina Lakel.

Like everything she does, the designers’ diversity was carefully thought out.

‘I wanted to live and breathe my message,’ she said.

Maria carried herself with confidence and grace as she finished inside the top 10, before Miss Mexico Andrea Meza ultimately took the Miss Universe 2021 crown.

The 26-year-old model and software engineer beat out 73 other contestants including Miss Brazil Julia Gama – who was named runner up – and Miss Peru Janick Maceta Del Castillo, who came in third place.

Maria said she got in shape for the competition by taking up lagree, a 40-minute Pilates-style workout that combines cardio and resistance training to tone and strengthen the entire body.

‘I actually started about a year and a half ago,’ she said.

‘I’ve never been a sporty person, but this is something I actually enjoy. It’s quite intense but I love it.’ 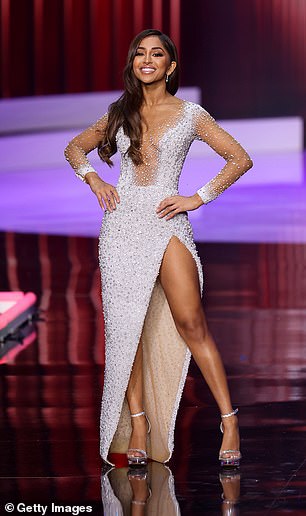 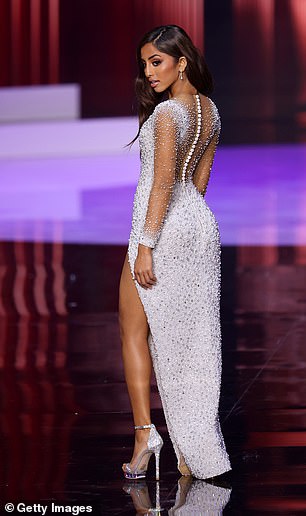 At the grand finale in Florida, Maria (pictured) stunned in spectacular looks from a variety of designers, including this show-stopping Swarovski crystal gown hand-beaded over six months by Middle Eastern-Australian, Alina Lakel 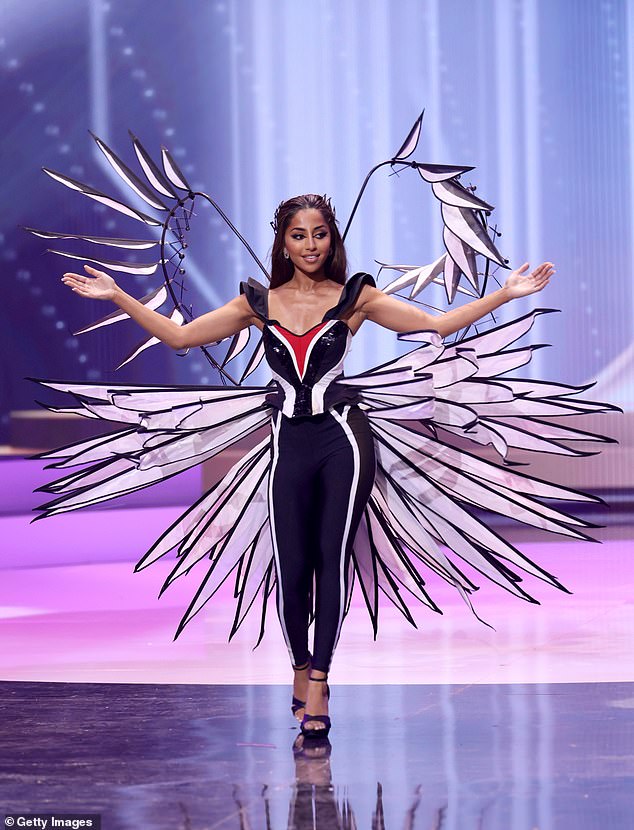 Maria said she spent a year training three to four times per week before hiring a personal trainer to help with weightlifting one month before the final.

She said she avoided weighing herself so that she could focus on how she felt rather than obsessing over a number on the scales.

Her pre-show diet primarily consisted of low-calorie ready meals from My Muscle Chef, along with a lorry load of her greatest weakness – muesli bars.

‘I keep a big basket of them in my home office,’ she said.

With the contest now behind her, Maria has already turned her attention to future plans.

She passed the time in hotel quarantine on her way home to Australia by writing a children’s book about diversity and inclusion, which she hopes to have published before the end of the year.

There’s plenty of collaborations and brand partnerships in the works, on top of her current role as an Olay skincare ambassador. 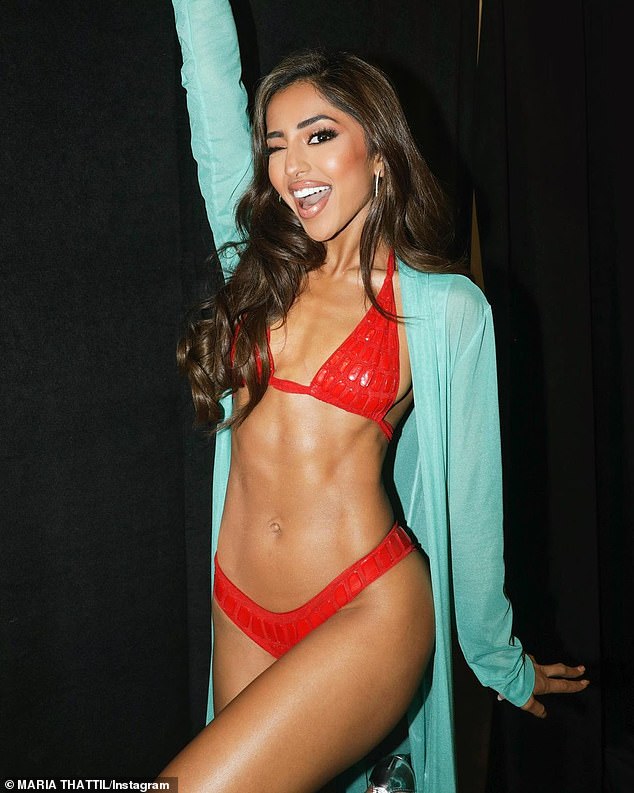 Maria in shape for the competition by taking up lagree, a 40-minute Pilates-style workout that combines cardio and resistance training to tone and strengthen the entire body 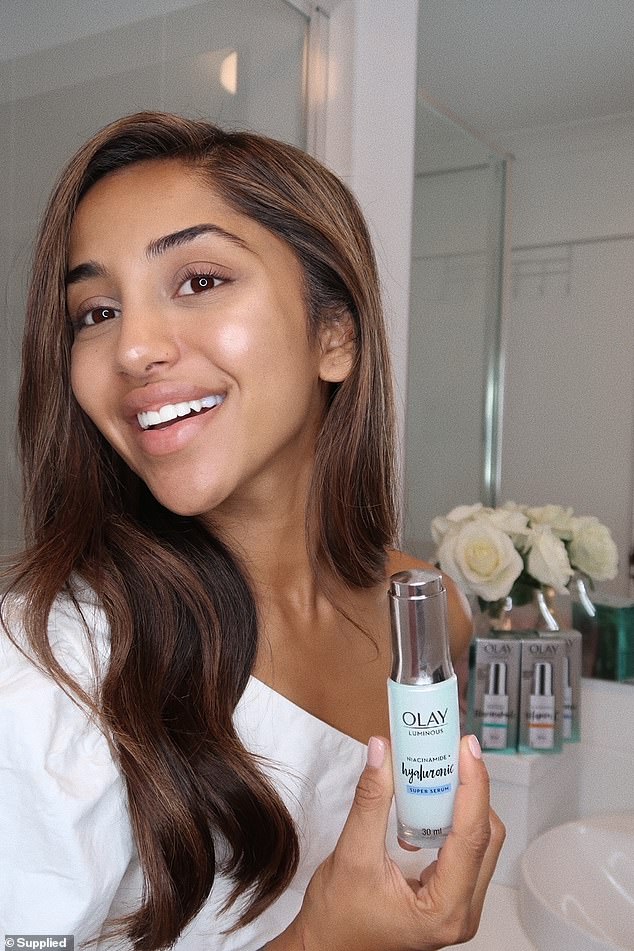 The driven young star is currently an ambassador for Olay skincare

‘Olay are amazing because they believed in me before anything exciting happened,’ Maria said.

‘It’s wonderful to have our relationship grow as my career grows.’

She hopes to carve a career in media and television to show kids that success is possible, no matter where you come from.

The only thing Maria is prepared to rule out is another beauty pageant.

‘I didn’t enter Miss Universe because I loved pageants. I entered with an intention and I did what I went there to do,’ she said.

‘My message has always been about promoting diversity, and I’m going to use the platform Miss Universe gave me to do just that. But no, no more pageants!’