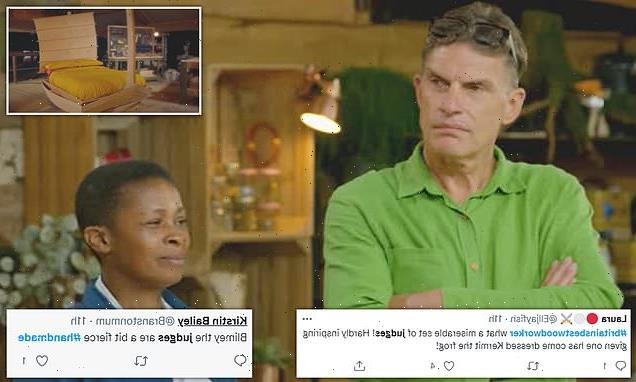 Viewers SLAM Channel 4’s new ‘Bake Off for Wood’: Handmade: Britain’s Best Woodworker judges are slated as ‘too harsh’ and ‘horribly mean’ while challenge to build a bed is deemed ‘too complicated’ for first episode

Viewers slammed the ‘miserable’ judges of Channel 4’s Handmade: Britain’s Best Woodworker last night for being ‘too harsh’ on contestants.

The first episode of the new show, which has been dubbed ‘Bake off for wood’, saw nine amateur carpenters asked to build a show-piece bed in the ‘Big Build’ challenge, and tackling a technical task.

Deciding who would be leaving were two industry heavy weights; award-winning architect Alex De Rijke and founder of the London School of Furniture Making Helen Welch.

However viewers slammed the programme, declaring the challenge to build a bed in the first episode was too difficult. Others said the judges were too critical, with one writing: ‘Blimey the judges are a bit fierce.’ 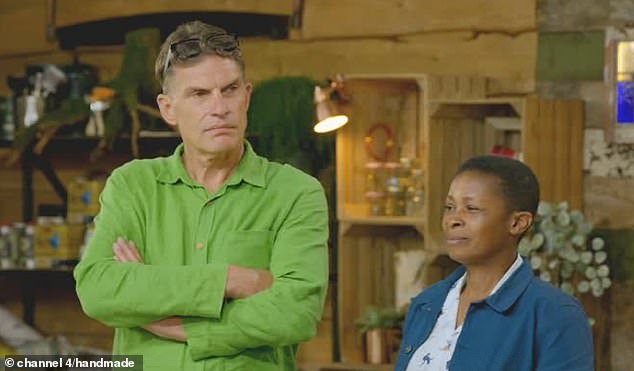 Starting the programme, Alex explained: ‘Wood has soul. You have to respond to that as a designer and as a maker.

‘I want good quality and I want simplicity but I know that’s not easy to achieve.’

Meanwhile Helen said: ‘I’m not going to be very forgiving if the finish is very rough and ready.’

The first task saw the builders tasked with crafting a double bed, at least 2 metres high, and ‘beautifully constructed’, showing a good understanding of joinery and an effective use of wood. 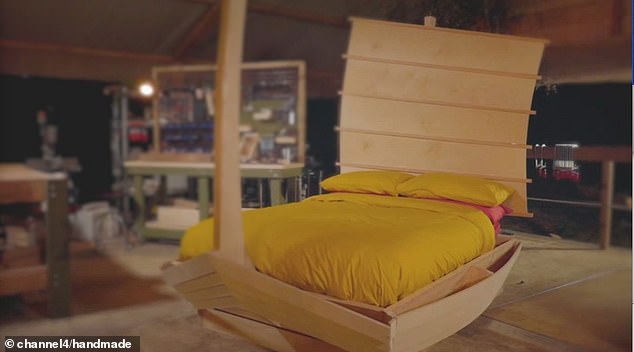 However many viewers felt the judges were too critical of the amateur carpenters, including a moment in which they said the joinery on one bed shaped like a boat was ‘unforgivable’

Speaking to contestant Rada about his hope to build a Japanese style bed, Alex told him: ‘Your design makes it sound complicated and I’m all about the virtue of simplicity.’

And later speaking about Tim’s decision to build a ‘ship-bed’, he told fellow judge Alex: ‘What Tim is doing is of course highly eccentric but it is a crazy design.’

She added: ‘It makes it sound like he’s bitten off more than he can chew.’

Meanwhile in the skills challenge, the amateur carpenters had 90 minutes to make a printing block. 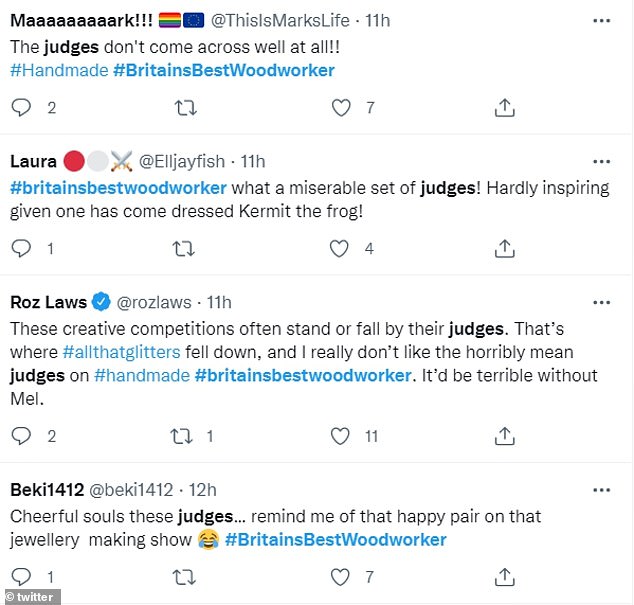 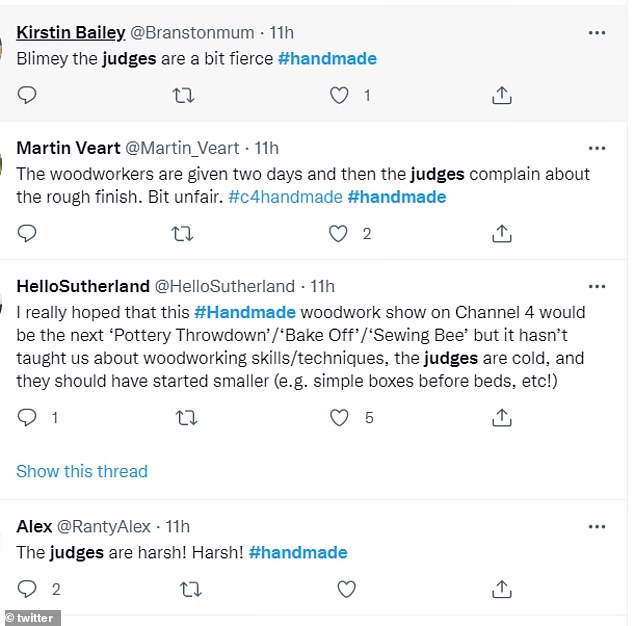 During the judging, they told Mandy hers ‘wasn’t a good print’, while Billy was told: ‘Your tree could be a cauliflower.’

The carpenters returned to the tent to continue their bed designs, before the judges once again critiqued Billy’s design.

Alex said it was ‘do or die’ for Billy as they raised concerns they would be able to see the joinery in his wooden bed.

After two days of epic effort from the contestant, Alex and Helen took to studying the carpenter’s work. 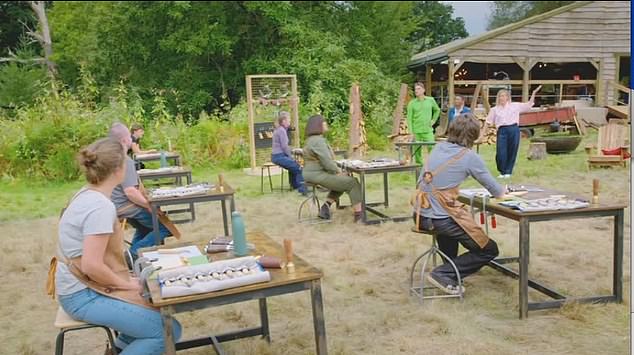 The first episode of the new show saw nine amateur carpenters challenged to build a show-piece bed in the ‘Big Build’ challenge, breaking off in the middle of the job to tackle a technical task 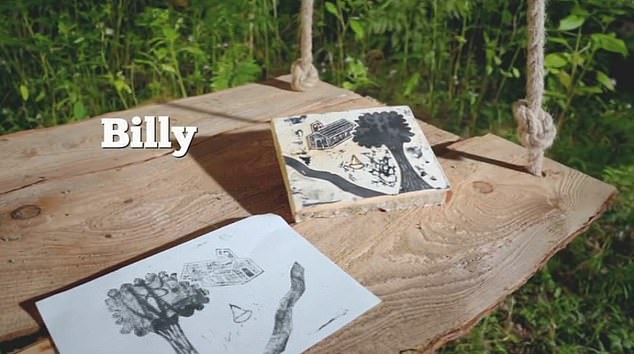 Meanwhile in the skills challenge, the amateur carpenters had 90 minutes to make a printing block – with the judges saying Billy’s tree design looked more like a cauliflower

Tim’s whimsical bed shaped like a boat was slated by Alex, who told him: ‘It could have rocked like a simple rocking horse does. It’s a missed opportunity. I’m really sad about that.’

Helen added: ‘There is some really iffy joinery going on.’

Meanwhile Alex went even further, commenting: ‘Iffy is not a word, unforgivable is a word.’

And art school graduate Jade was told her intricately carved headboard ‘didn’t work’, with Helen explaining: ‘You could have decided to do something more structural.’ 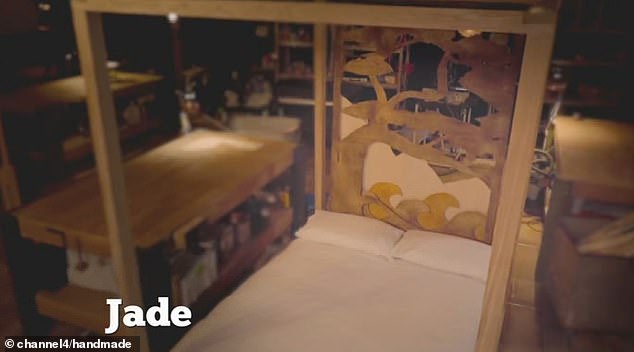 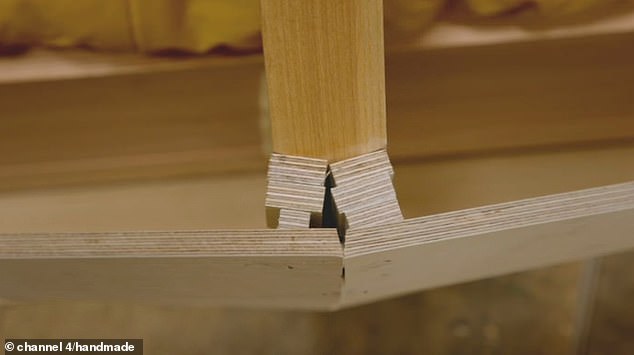 The joinery on Tim’s ship bed was also slammed by the judges, who told him it was ‘not just iffy but unforgivable’

However it was Chantelle who was ultimately given the boot for her ‘wasteful’ sculptural design.

Many of those watching felt the judges were ‘too harsh’ on the contestants, with one writing: ‘The judges don’t come across well at all!’ 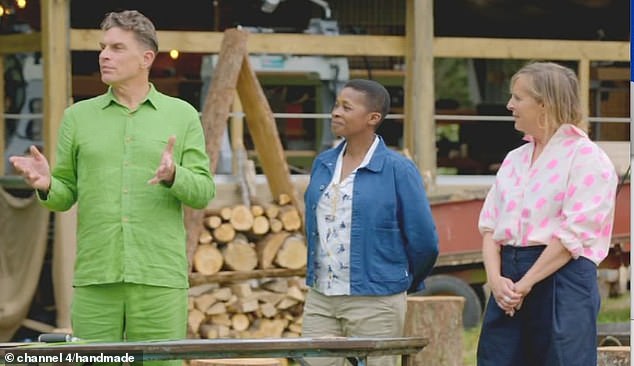 Many of those watching felt the judges were ‘too harsh’ on the contestants, with one writing: ‘The judges don’t come across well at all!’

Another wrote: ‘These creative competitions often stand or fall by their judges.

‘ That’s where #AllThatGlitters fell down, and I really don’t like the horribly men judges on #Handmade. It’d be terrible without Mel.’

A third commented: ”I really hoped that this #Handmade woodwork show on Channel 4 would be the next Pottery Throwdown/Bake Off/Sewing Bee but it hasn’t taught us about woodworking skills or techniques, the judges are cold and they should have starter smaller (e.g. simple boxes before beds etc!’