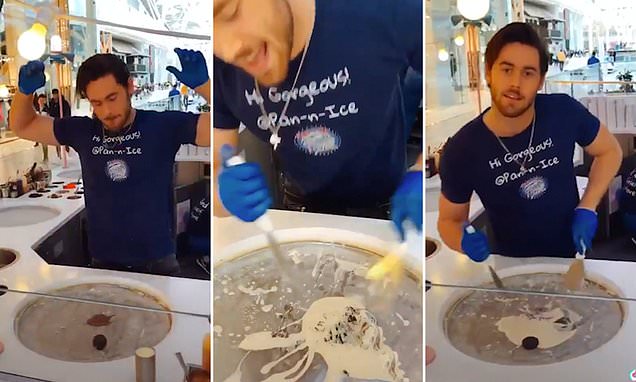 An ice cream vendor with a sultry stare and provocative moves has divided opinion online.

Rob Huysinga, 24, from Berkshire, is CEO and co-founder of the ice cream chain Pan ‘n’ Ice, which has stalls in shopping centres in London and Manchester.

The entrepreneur won praise – and dozens of admirers – after sharing TikTok videos of himself thrusting, smiling and gazing at the camera. ‘I actually think that ice cream man is sexy,’ one posted. 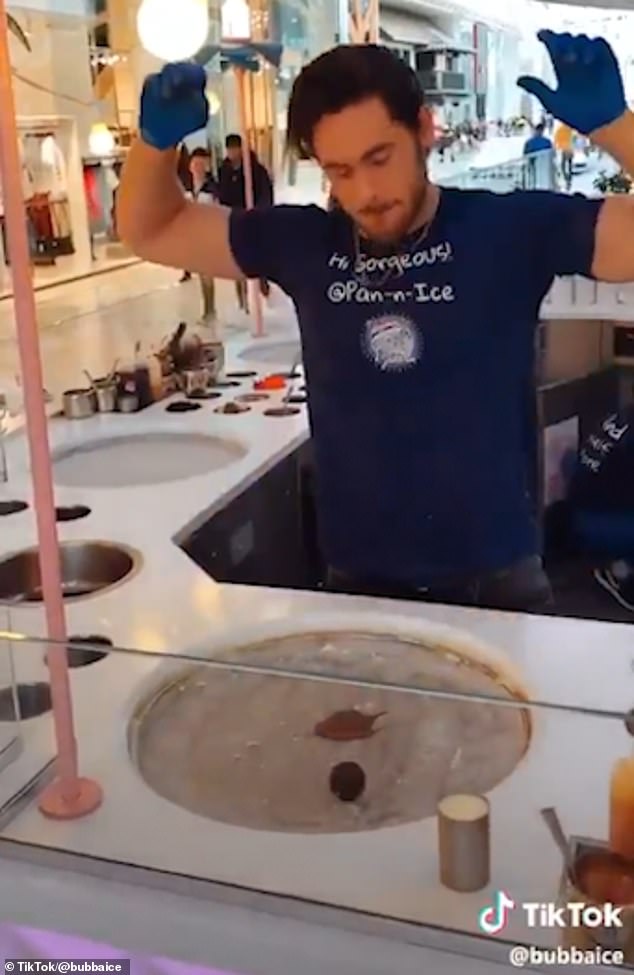 Ice cream entrepreneur Rob Huysinga, 24, from Berkshire, is CEO and co-founder of the ice cream chain Pan ‘n’ Ice, which has stalls in shopping centres in London and Manchester. He has gone viral with videos of himself TikTok thrusting, smiling and gazing at the camera 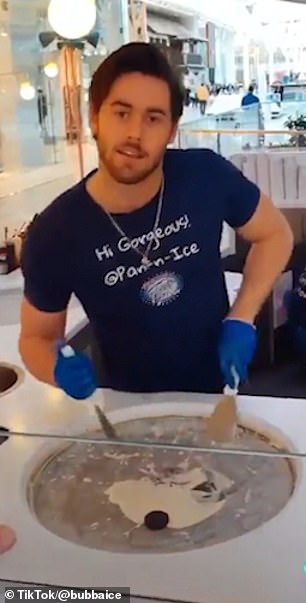 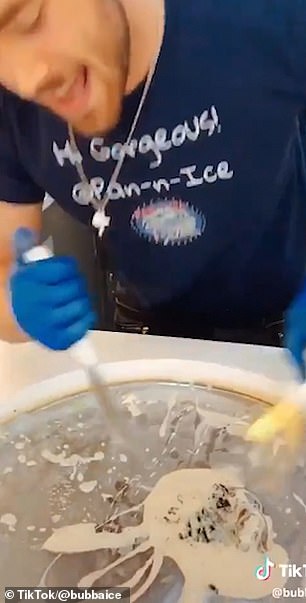 The entrepreneur won praise – and dozens of admirers – after sharing TikTok videos. However others insisted he was ‘cringe’, with one writing: ‘suddenly I’m lactose intolerant’

Videos shared by Rob show him creating  ice creams on an ‘ice pan’ in front of customers.

Paint scrapers or metal spatulas are then used to chop toppings into the base and scrape it around to create air.

The videos now have millions of views online, with thousands responding with their thoughts.

One particular clip, shared on International Women’s Day, has proved particularly provocative and has received more than 6.8 million views on Twitter and thousands of responses.

Speaking in the clip, Rob said ‘this is for all the beautiful ladies out there’ before pouring the ingredients onto the ice pan plate.

As he mixed the ingredients together, he repeated his catch phrase, ‘ice cream makes you sexy guys’ and maintaining intense eye contact with the camera.

Thousands are unsure about how they feel about his intense eye contact and thrusting moves.

One tweeted: ‘#Icecream man would be cute if he just shut up and made the ice cream.’ 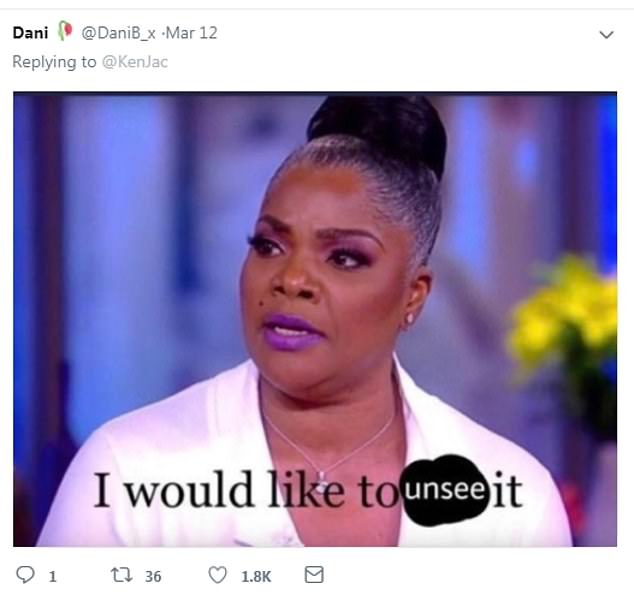 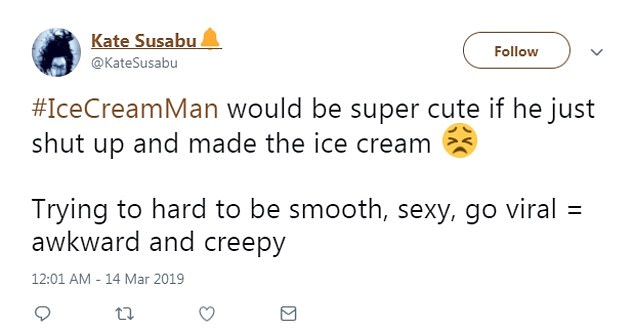 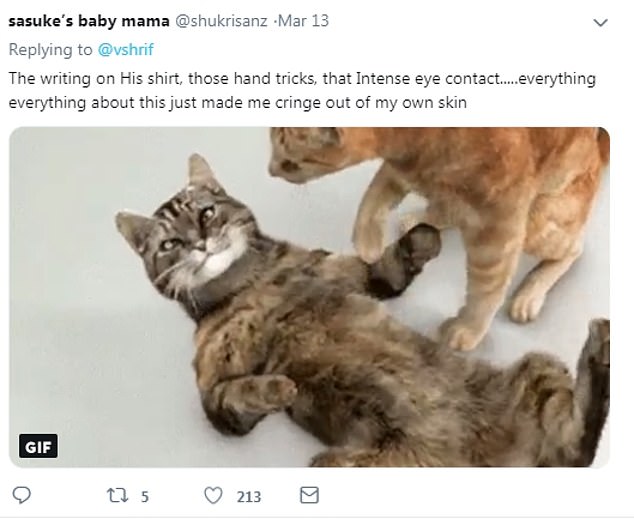 People are divided over Rob Huysinga’s sexy moves, with some videos now having millions of views

Another posted: ‘This was difficult to watch. I couldn’t make eye contact with a phone without cringing. THIS MAN SAID “Ice cream makes you sexy guuuuuuyyyyssss” kill me.  One commented simply: ‘Why is he thrusting’.

However Rob, who wears a t-shirt saying ‘hey gorgeous’ in some videos, insisted he was simply try to reflect the ‘fun and playful’ brand and to bring ‘energy’ into the parlours.

He said: ‘Upon reflection, with this particular video I have allowed myself to be misinterpreted and misconstrued. 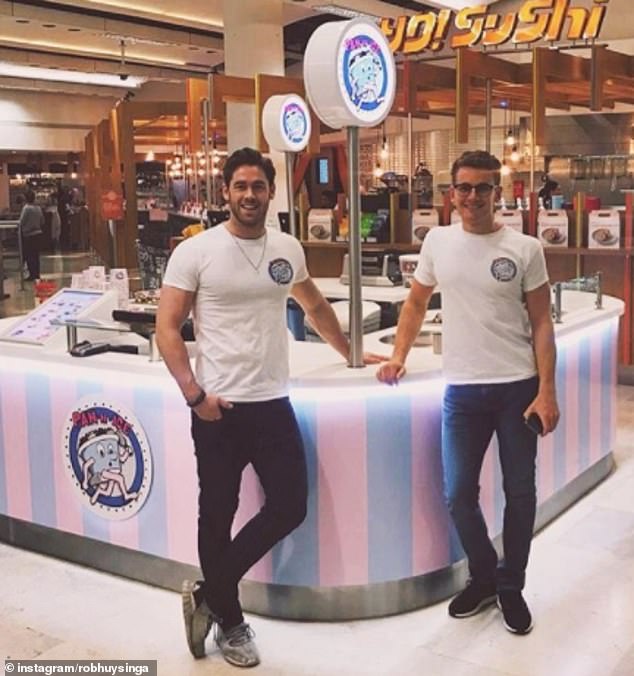 Rob Huysinga with his colleague and co-founder Henry Milroy. The pair came up with the idea to launch an ice cream business while travelling in Thailand

‘The eccentric manor upon which I make the ice cream, right through to the introduction; the whole thing has been completely blown up and taken out of context. I would like to sincerely apologise to anyone who may have been offended by the video.’

He goes on to say that he feels frustated that other videos, including those of him having fun with customers or at children’s hospitals, do not receive the same attention.

He continued: ‘Instead, individuals look at where they can hate and just jump on the band wagon and ride it. This is something I have had to learn abruptly, and going forward I will ensure I am more aware of what I am doing in my videos and how they’ll be perceived.’