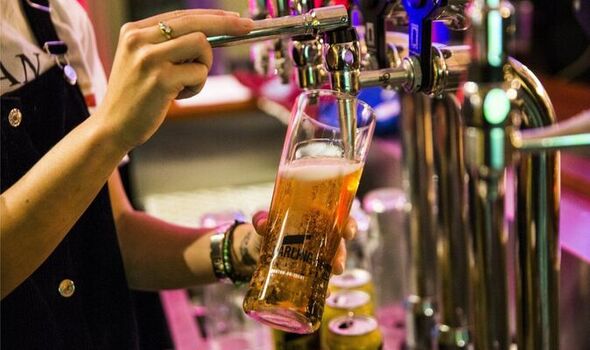 Such situations have included a family gathering (43 percent), the first social outing with new colleagues (25 percent), and catching a flight (23 percent).

More than one in 20 (seven percent) have even had a “shot” of courage before a job interview, while 10 percent have done so before a video call.

Among the top situations in which people drink to feel their best are on nights out (55 percent), on holiday (48 percent), and on someone else’s wedding day (43 percent).

The research was commissioned by alcohol-free spirit, SENTIA, co-founded by neuroscientist Professor David Nutt – who has created an alcohol-free beverage that literally “takes the edge off”.

It also emerged that one in six (17 percent) admitted they feel the best version of themselves when drinking alcohol.

But 36 percent wish they could feel this way without having to rely on a drink – and almost half (46 percent) struggle with confidence in social situations if they’re not drinking.

SENTIA co-founder and neuropsychopharmacologist, Professor David Nutt, said: “It’s really interesting to see that more than half of those polled (53 percent) would choose a drink that gives them all the benefits of alcohol without the negatives, if they could.

“The exciting thing is, with the scientific advances in food technology in recent decades, this drink exists.

“We have discovered a specific blend of botanical ingredients that interact to target GABA activity – that’s the neurotransmitter responsible for sensations of sociability – in the brain.

“This triggers the same response we experience when we have roughly two alcoholic drinks – the volume the majority of those polled said they needed to feel their best self.

“Enhanced GABA activity has been scientifically found to increase sociability and conviviality, whilst reducing anxiety.”

The research also found adults would struggle to dance in public (33 percent), give a speech (26 percent), or go on a date (18 percent) without alcohol in their system.

A night out without drinking would leave people feeling quiet (17 percent) and uncomfortable (17 percent).

As well as a boost in confidence, people are more sociable (39 percent), happy (34 percent), and talkative (33 percent) once they’ve got a drink in them.

More than a third feel they “need” a drink in some social situations (37 percent) – but 18 percent would find drinking non-alcoholic beverages easier if they knew someone else who was doing the same.

A further four in ten polled, via OnePoll, have tried to give up or cut out alcohol – including two-thirds (63 percent) of 18-24 year olds, compared to just a third (33 percent) of over-65’s.

Reasons for trying to cut back included to improve health (59 percent), save money (50 percent), and avoid hangovers (38 percent).

“We hope to help produce those feelings of sociability in the brain, helping conscious drinkers and healthy hedonists come together and feel great in these moments.”