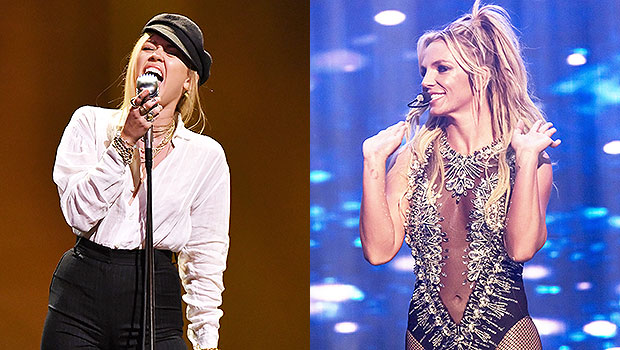 Is a collaboration between Miley Cyrus and Britney Spears underway? Get more details on the ‘Malibu’ singer’s upcoming music projects, which she revealed during her visit to 103.5 KTU on Dec. 10!

Miley Cyrus, 26, just teased the possibility of a future song with Britney Spears, 37! A listener on 103.5 KTU’s Cubby And Carolina In The Morning radio show asked Miley if she’d collab with Britney on Dec. 10…the “Wrecking Ball” singer reminded the fan that she’s been there, done that! “We did a song on Bangerz called ‘SMS (Bangerz),’ and it was one of the best experiences ever,” Miley said, referring to her 2013 album. But Miley was so impressed with the team effort, she revealed that she “would definitely do it again.” Can they make that happen ASAP?

“If you notice I’m the first person that comments on every photo she posts, I’m her biggest fan,” the Disney alum continued to muse, stressing that she stands by her offer. Until we get a repeat of “SMS (Bangerz),” we can rest easy knowing that Miley has more music to throw our way. The pop star promised the radio show that she’ll “definitely put out a record next year,” after just releasing her latest hit — “Nothing Breaks Like A Heart” — on Nov. 29. To bring the new record to our attention, Miley went topless for sexy self-promotion on Dec. 7!

Miley last toured an album (Bangerz) in 2014, and predicted that she’ll take to the road again in late 2019 or “early 2020.” For those of you impatient for the new year to roll over, her collaborator on “Nothing Breaks Like A Heart,” Mark Ronson, teased that he’s working on a “holiday special” with Miley in an Instagram photo on Dec. 10! He and Miley are performing their cover of “Happy Xmas (War Is Over)” for Saturday Night Live on Dec. 15, although it’s unclear if that’s the joint effort Mark was referring to. Miley did tease during the radio interview that the SNL performance will be “really special,” considering the country’s “politic climate.”

From Bangerz to Christmas song covers, Miley’s music continues to evolve — and so do her outfits! After giving her and Britney’s 2013 collab another listen, relive more throwbacks by checking out HollywoodLife’s gallery of Miley’s style evolution!