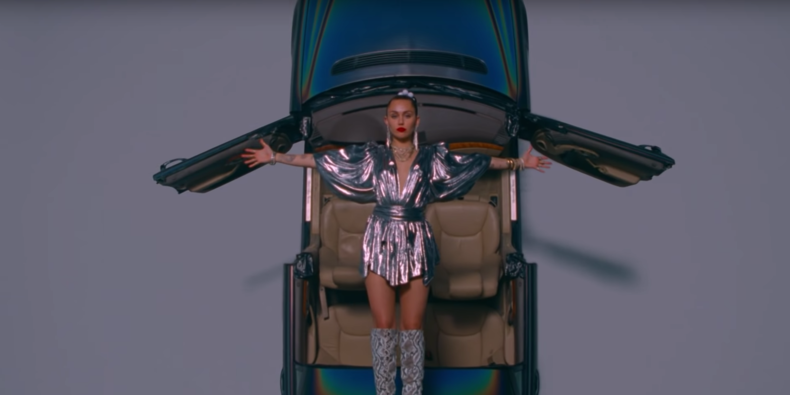 Miley Cyrus has officially made her comeback with a feature on Mark Ronson's new single, "Nothing Breaks Like a Heart."

The music video chronicles Cyrus as she is chased by police cars and helicopters, driving a getaway car through all of her past lives and eras (there was the Bangerz era, the Younger Now phase, and so on), past a gaggle of nuns and priests in a strip club, and plenty of stans. She does this all while wearing a silver dress reminiscent of Drew Barrymore's iconic 1980s prom getup in Never Been Kissed. As the fictional "Wolf News" channel follows her and her attempted escape, labeled "Miley's Wild Ride" in the lower third of the breaking news footage, the pop star sings about the trials and tribulations of fame, consumer culture, and heartbreak in the country-lite meets pop twang she has become known for in her career as a musician.

Then, Ronson himself joins her in the passenger seat as the cops catch our pop culture outlaws and the car overturns. But don't worry, Cyrus and Ronson survive the crash, of course, and the video finally lands on some on-the-nose Cristo Redentor imagery as Cyrus stands tall upon a stack of cinderblocks and poses as a Christ-like martyr with arms outstretched in front of the flipped up car resembling the shape of a crucifix. Moral of the story: being a fixture of the public is hard, and often requires personal sacrifices for the culture.

Cyrus's comeback comes at just the right time, as she and Ronson will perform "Nothing Breaks Like a Heart" together on Saturday Night Live on December 15, and real fans of the pop star know she has quite the track record of turning out some unexpectedly great stripped down SNL musical performances. Fans have also formulated a theory that Ronson will work on a track with both Cyrus and Lady Gaga for the producer's upcoming lineup of mid-tempo heartbreak anthems and "sad bangers," as he calls them.

Related: Miley Cyrus and Liam Hemsworth Donate $500,000 to the Malibu Foundation in the Wake of Woolsey Wildfire