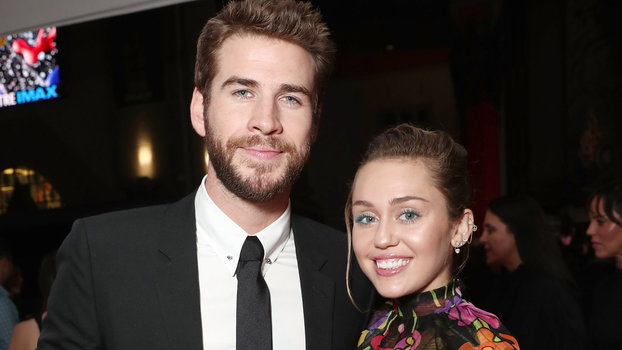 After shocking everyone with a secret wedding this weekend, Miley Cyrus seemingly confirmed her newlywed status on social media.

On Wednesday, the “Malibu” singer posted several snaps of her and Hemsworth on Instagram after the wedding festivities, and they’re seriously swoon-worthy. Dressed in a white off-the-shoulder gown, Miley kisses her new husband — who is wearing a traditional tux — in one photo.

Meanwhile, in another snapshot, Hemsworth holds Cyrus in his arms, showing off what appears to be a wedding band on his left hand. “10 years later…” Miley captioned the super romantic picture.

Rumors of a wedding initially began when the couple’s friend Conrad Jack Carr posted a video to his Instagram stories of Hemsworth and his brothers doing a shotski with “Mr. and Mrs.” balloons in the background. Miley’s family was also in attendance, including her mom, Tish, and sisters Noah and Brandi.

After nearly ten years of dating, the couple, who met on the set on Nicholas Sparks’s drama The Last Song, cemented their devotion to one another by taking the next step in their relationship. Through their decade-long romance, Cyrus and Hemsworth experienced a series of ups and downs, including an engagement that was ultimately called off.

In 2012, the actor popped the question with 3.5-carat diamond ring, and a year later the pair broke up. However, Hemsworth and Cyrus reunited three years later, with Miley wearing the Neil Lane sparkler on her finger again.

“I think people that break up and get back together, that’s awesome,” the Disney Channel alum said during an interview with SirusXM in May 2017 about her split and reconciliation with Hemsworth. “You get time to be yourself. You get time to grow up. I think if you’re growing up attached to another person, you never really get solid as your own being. So I’m really solid, and then he gets to be really solid. And together we get to be two really grounded people. It’s not a half and a half making a whole.”